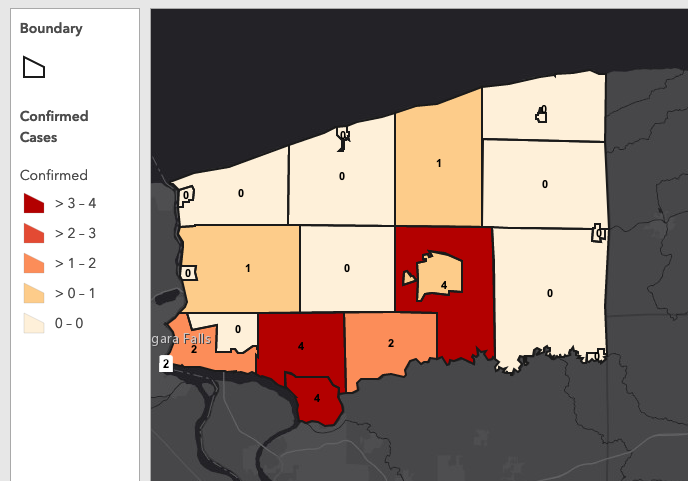 A screen grab of the Niagara County COVID-19 "heat map."

Niagara County currently has 46 people in quarantine, and 53 who have completed quarantine.

“People will get better – whether it’s a quarantine from me, or whether a self-quarantine. People are going through those 14 days, still having no symptoms, and then they’re released from quarantine. I think that’s an important thing. Those are good things.”

That is a total of 19 positive coronavirus cases, with 16 people in isolation and three recovered individuals.

Though testing is being done, Stapleton said a lack of kits remains a frustration.

“If we can’t do enough testing in our area, we can’t identify those places and quarantine the people; and making sure we isolate the virus.”

The Niagara County Department of Public Health released a “heat map” today. Here is a link, which will be updated daily: https://niagara-county.maps.arcgis.com/apps/opsdashboard/index.html#/1438a0783c4e4b0883aa42d3f8009257.

“That shows the higher numbers where you have higher population density – no surprise, along the lake you’ll have low numbers; less-densely populated areas also have low numbers,” Stapleton said. “But you’ll see the high-density areas – whether it’s Niagara-Wheatfield, City of Niagara Falls, City of Lockport, North Tonawanda – those numbers are surprising us. We expect that there are numbers across the county; they just haven’t been tested yet to show what the numbers are.”

He explained the map, “Gives (people) a little more useful information, rather than the list of ZIP codes.

“We think it will be well-received. We’ll be updating these on a daily basis, so that people are kept up-to-date. … The numbers will show the changes.”

•As for a tax extension announced Wednesday by Legislator Richard Andres, Wydysh said a special meeting will be held at 5:15 p.m. Friday from the Niagara County Courthouse in Lockport. Legislators will vote at that time.

“We have a resolution that we’re bringing forward that will give some relief to county taxpayers: The property taxes that are due, and the penalties and interest,” Wydysh said. “We’ll have much discussion tomorrow night on what that will look like, and how we can help in that situation.”

The meeting is closed to the public, but will air live on LCTV.

Wydysh and Stapleton addressed the public from the LCTV studio in Lockport. Their press announcement was closed, in keeping with recommended “social distancing” guidelines.