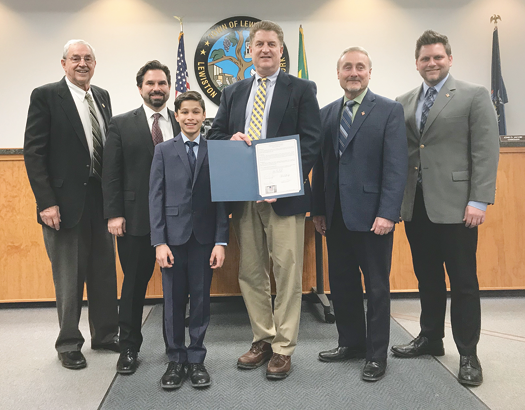 The planned session was intended to discuss a revaluation project of town and village properties. Instead, Supervisor Steve Broderick and Town Board members led off by recognizing Lew-Port seventh-grader Simon Zawistowski on his placement in the national VFW Patriot’s Pen youth essay contest titled, “What Makes America Great.”

Simon is a member of Boy Scout Troop 824, ranking as a First Class Scout. He submitted his essay to VFW Downriver Post 7487. It was forwarded to VFW Division 7 and chosen as the winning entry. For his achievement, Simon was also selected to represent New York at the VFW national convention.

“The Lewiston Town Board is proud to recognize Simon for his outstanding achievement and wish him continued success,” Broderick said.

Simon was joined by Broderick, Town Board members and VFW members Bill Justyk, Vince Canosa, Harry Raby and Larry Stephens, for a photo recognizing his achievement.

•Town Councilman John Jacoby said he expected funding would be made available under the town’s Water Infrastructure Improvement Act by later this spring or summer and the town would need to bid for it.

“These are grants available for up to 60% of the project’s cost,” Jacoby said. He noted the grants are competitive and done on a points system.

Broderick said he had spoken with town grant-writer Connie Minor and will discuss the matter with Engineer Robert Lannon.

“They want you to apply for the bid before it is granted,” he said.

He explained the town had not yet been awarded the bid and that questions remain on whether the town could meet the deadline. With the time frame extended to 150 days, Broderick said he would discuss the matter with Minor.

•Town Finance/Budget Director Jacqueline Agnello requested board approval for the following budget revisions: $600 from highway superintendent personnel to town garage contractual, to cover expenses the balance of the fiscal year; $4,500 from the general repairs gas and electric account to cover town highway salt expenses; and $165,000 from the town’s Water Department serial bond interest account to the Water Department transfer out account. The measure was intended to move funding to pay off the town’s $800,000 water bond anticipation note.

All finance requests went on to be approved by board members.

On a related note, the board approved an authorization request from Agnello for Broderick to sign a two-year contract renewal with Municipal Solutions. The Rochester-area company is utilized for bond transactions and SEC filings with the town.

•The Town Board approved the appointment of Carol Jacobs as interim senior citizens coordinator at the Lewiston Senior Center. The appointment, retroactive to Feb. 25, provides for an annual salary of $40,281.60, 80% percent of the director’s salary.

Broderick said Jacobs’ appointment is contingent until a permanent coordinator is hired.

•The board approved the resignation, with regret, of Charlene Rutkowski from the Lewiston Police Department. It then approved the hire of Maria Battista and Jonathan Emmons as full-time office with LPD, effective March 9.

•The town announced Bella Rose Winery will host a 5K-trail run on Sunday, June 9, on the vineyard property at 1243 Ridge Road. A final course design is being developed and will be available in the future.