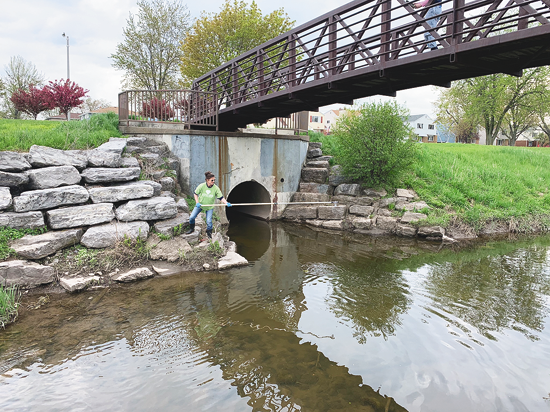 Waterkeeper a multi-branch organization for all water concerns

Plastics pollution a new focus for 2020

Buffalo Niagara Waterkeeper is a 30-year-old nonprofit, presiding over an area of some of the most memorable waterways in the world. It’s not just Niagara Falls, the Great Lakes Erie and Ontario, rivers Niagara and Buffalo. It also encompasses the groundwater, the creeks, the riverbeds and tributaries, all of which are part of the greater Buffalo Niagara watershed.

Waterkeeper monitors close to 70 projects each year on an operating budget of $8 million, most of which is raised through grants on the state and federal level. The organization also travels to Albany and Washington, D.C., to urge elected officials and administrative department heads to not forget Western New York and its unique environmental history.

“In 2020, one of the areas we’re focusing on is plastics pollution,” said Deputy Executive Director Kerrie Gallo. “There’s a lot going on across the Great Lakes, but also right here in Western New York. We’re trying to raise awareness about plastics pollution. We’ve got the bag ban, what’s going on with the plastic bag ban from a state perspective. We’ve got polystyrene, so Styrofoam. That’s the physical, tangible. You see it blowing in the air; you see it on the ground. We’re also working on microplastics.”

Gallo explained that plastics break down into small microbeads in the water. Through a microplastics testing program Waterkeeper created, small pieces of plastic were found in fish and birds, which means it is very likely to be in humans, she said.

Other areas are emerging contaminants that Waterkeeper is trying to advocate the protection of drinking water from.

“PFOAs are chemicals found in flame retardants,” Gallo said. “We’re working with our friends downstate to get health limits to PFOAs to make sure they’re not in our drinking water.”

The harmful algae blooms are also a concern. New York state does not have a quick response team on that issue, but Waterkeeper, because of its water quality samplings across the region, is “usually the first set of eyes on” a harmful algae bloom, said Gallo.

Today, Waterkeeper is part of a massive umbrella of waterkeepers worldwide. While it receives no funding, Buffalo Niagara Waterkeeper benefits from the research resources from 300 waterkeepers across the globe.

“We were the first nonprofit environmental organization to be awarded a federally appointed coordinator for the Buffalo River restoration effort,” Gallo said. “That was a big deal for us. It gave us the official baton to go ahead and do the work that was needed to be done to get the partners together, get the agreement signed … and get the government agencies and Honeywell, as the work’s responsible party, to get dredging the river completed and get the habitat restoration in the ground.”

Waterkeeper is also one of the stakeholders and the chair of the Niagara Relicensing Environmental Coalition, which is one of the entities that came into being when the New York Power Authority signed its first license to operate the power plant in 2005. The coalition was given “a pot of money to set aside, to be stewards of the Niagara Greenway.”

“As part of our role as the chair of this group, it’s called ENREC, we have a role to play (at the Niagara Greenway Commission meetings),” Gallo said. “As part of the role, we look at all the applications for consistency that come up through the Greenway Commission and then we also have a seat at the table as one of the committee members that funds projects in the area.

“So, we review projects for funding, we vote on them and we co-chair one of those committees, as well.”

“In 2017, we changed our name to Buffalo Niagara Waterkeeper,” Gallo said. “That was really because we felt like it needed to catch up to the breadth and the scope of the work we had been doing. All water, all kinds of water.

“We have about 26 full-time employees, and our work touches upon a couple major areas.”

“Within those teams there are functions, for example, construction functions we’re working on for the Buffalo Blueway, which is basically a waterway for people to enjoy whether paddling or fishing or boating or walking along it,” said Marketing Director Jennifer Fee. “There’s a Greenway connection there, as well, but we’ll be doing construction (on the Blueway) to improve them and install docks and make them more accessible for everyone as public access points.”

Some of the major initiatives that Waterkeeper is focused on currently have to do with very different parts of the area within its care. In urban centers such as Buffalo or Niagara Falls, the idea is restoring lands that have been previously developed.

In the surrounding ring of suburbs, concentration on tributary streams comes into play that are seeing an increase in sediment, invasive species, and sewer overflows.

Finally, in the hillier regions of the southeast, and flats in Niagara County, Waterkeeper is talking about agriculture, repurposing land, and protecting remaining forests.

“So, fixing it from the backend, but also protecting it,” Gallo said.

In that urban core, Gallo talked about not just restoring wetlands to filter out sewage – much like a sponge picks up dirt, but still lets water out – but of fixing the infrastructure, the pipes and artificial waterways.

“Our sewage and our stormwater is combined into one (set of) pipes,” Gallo said. “One old, antiquated set of pipes. And as we’ve grown over time, as we’ve paved places, all that stormwater runs off of the land, any time it rains or any time the snow melts. It used to get absorbed into the land – now it runs off into the waterways and it inundates the pipe systems. The pipes can’t carry enough water fast enough to get to the sewage treatment plant. The system is built in with ‘overflows.’ That means when the pipes get inundated with stormwater, water overflows into the waterways. You’re not overflowing with just stormwater (though), but also sewage.”

Gallo also talked about industrial pollution, which to this day still occurs in Niagara Falls and across the Great Lakes.

“There’s a lot of effort being made to track down where that’s coming from still and stop it,” she said. “Then get the toxic sediment out so we can begin to restore those systems. That’s part of our industrial heritage, that’s a real thing across the Great Lakes. It’s not limited to just here. It’s a Great Lakes problem.”

“It’s not dissimilar to the Detroit River,” Gallo continued. “There’s a lot of similarities throughout the Great Lakes and all the post-industrial cities. We’re going through that same growing pain, evolution, if you will. So, that’s where when we talk about the policy and advocacy work, we work across the Great Lakes in collaboration. We have a lot of shared stories and a lot of shared work to do.” 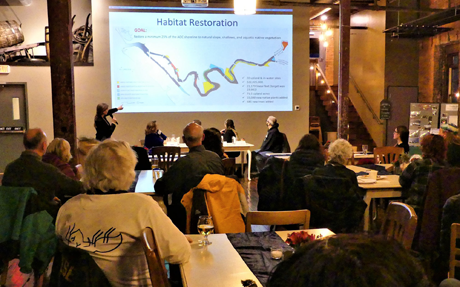