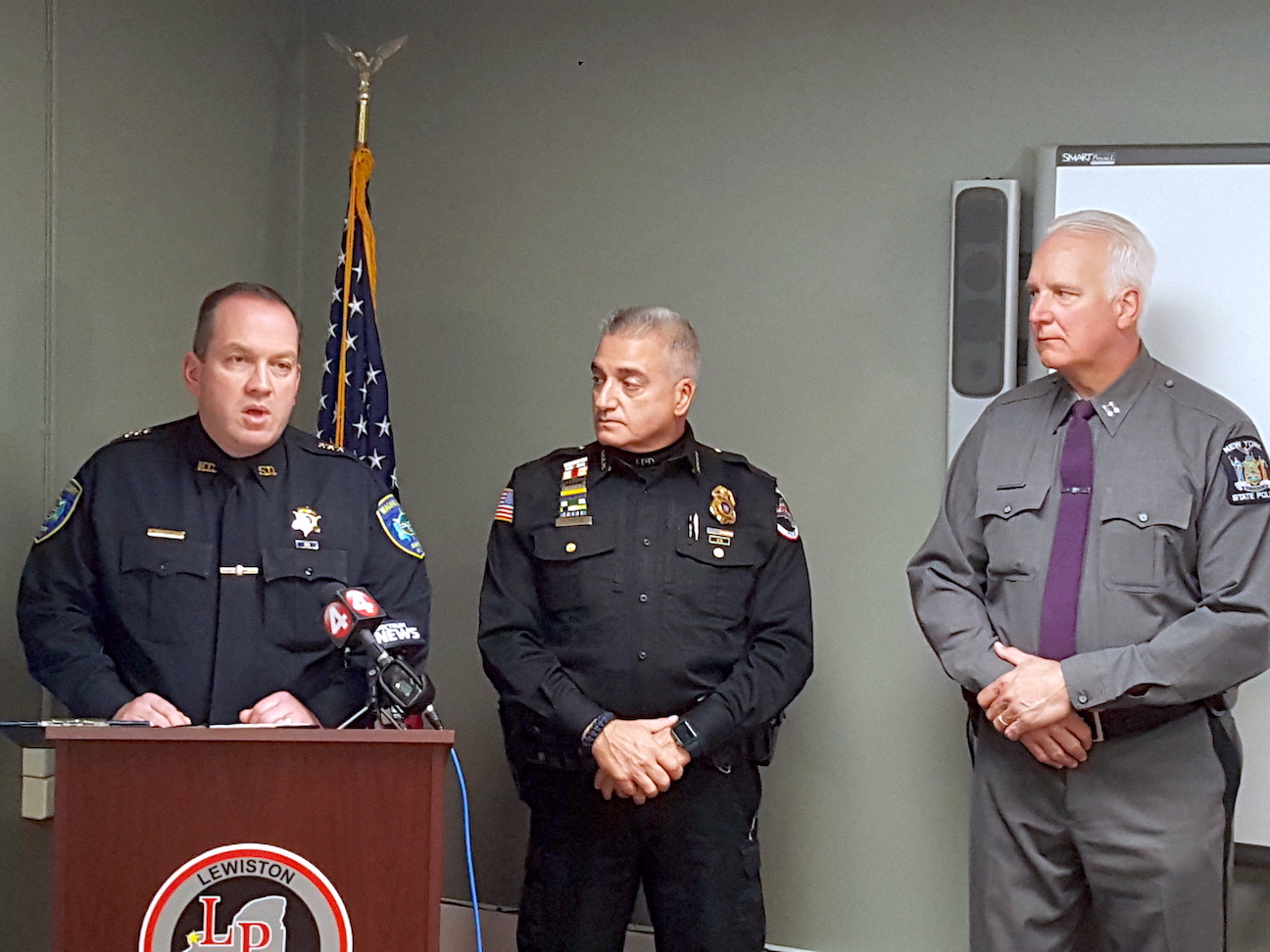 Area police are continuing their investigations into an incident that occurred early Sunday morning. Police report shots were fired and two injured – one fatally – on the Tuscarora Nation reservation.

Reports from the Lewiston Police Department, Niagara County Sheriff’s Office and New York State Police revealed that, at 4:48 a.m., the NCSO dispatch received a call of shots fired at a residence in the Chew Road/Mount Hope Road area in the Town of Lewiston.

“Patrols responded and they did find a victim in his house,” LPD Chief Frank Previte said at a press conference on Sunday. “He claimed there were three intruders that were in the house, armed subjects who came into the house. There was a confrontation and there was gunfire that was exchanged. In that confrontation, the owner was struck and the homeowner also returned fire and struck one of the suspects that entered into his house.”

Previte said that, when officers arrived, the suspects had already fled the scene in a vehicle. LPD officers along with a NCSO deputy immediately began administering emergency medical treatments to the homeowner.

“They, along with the Niagara County Sheriff’s deputy, were able to render first aid, probably life-saving first aid. They applied a tourniquet to the victim and he was treated and transported by EMS up to ECMC,” Previte said.

“(It was traveling) at a high rate of speed in the vicinity of where the shooting took place. And after a lengthy pursuit, they were able to get a vehicle stopped in the Town of Wheatfield on Lockport Road,” he explained.

It was then that police learned a fourth suspect was involved in the crime.

“At that time, three suspects were taken into custody. We were able to determine the fourth suspect involved, (a male), was deceased in the vehicle at the time of the traffic stop,” Filicetti said. “They did render first aid, but they were unable to revive the individual who was involved."

Filicetti did not name the homeowner. The deceased victim and the three suspects remain unidentified as investigations continue.

“(It’s) too early in the investigation to release any names. We have to notify family and it’s still an ongoing investigation,” he said. “At this point and time, we are coordinating our efforts. Obviously, the Lewiston Police, New York State Police (and) Niagara County District Attorney’s Office is involved in the investigation. As we continue, we have worked cooperatively with our investigators, and our crime scene units, to process the scene up on Lockport Road, where the traffic stop was, and also process the scene on Mount Hope Road, and we’re piecing together and will continue our investigation for the suspects involved. We still have patrols on location; it’s an ongoing investigation right now.”

He said the Mount Hope Road shooting may have been linked to a robbery, but added that was premature, as police are continuing their investigations.

“It appears to be some type of robbery at this point and time, but, again, with the investigation this early on, we’re still looking at all the possibilities. It’s too early to tell what the relationship was (of the victim involved) or the motive of the attempt,” Filicetti said.

As to charges being filed and what outcome, if any, would be for the suspects involved under New York state’s new bail reform law, Filicetti said the DA’s office is working with investigators to determine the extent of charges in the case.

“It’s too early; I don’t know what charges will be placed. That’s really what (will be determined) under the new bail reform. It depends what level of charges are placed on them, whether they’ll be held or not,” he said.

In the meantime, all three remain in police custody.

Previte said police and investigators are working with the Tuscarora Nation community.

“I can tell you that any interference (into the case) is going to hinder what we are doing, in law enforcement, and keep us from accomplishing our role, which is to hold who is accountable for this type of thing and bring charges, ultimately, if that is determined to be applicable.

“So, if people have any questions they can contact either the Lewiston Police Department, sheriff’s or New York State Police, or if they have any other information regarding this or regarding any of the situations, or what may have transpired. It’s still very early in the investigation as we said. And this is something that we take very seriously. I would encourage everyone to try to let cooler heads prevail in this type of situation and not be driven by emotion, even though it’s a very emotional situation.”

Previte emphasized, “Be assured that we have the best people that we have … to get to the bottom of this and find out and ultimately bring justice for whoever is affected by this.”

Those with information relevant to the case should contact LPD, NCSO or the State Police.