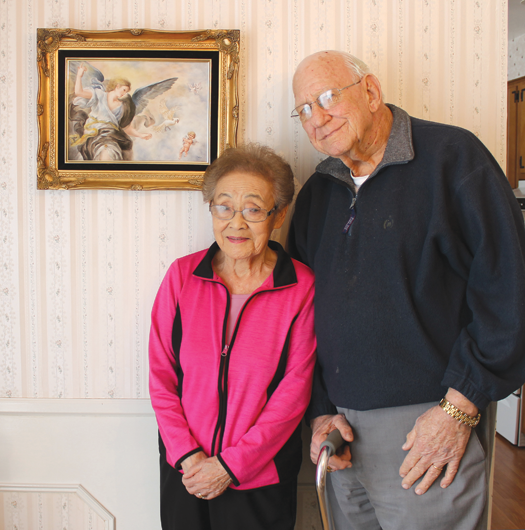 Chie Doring, pictured with her husband, Floyd, stands before one of her porcelain paintings that will be one of 20 displayed in an exhibit called "A Unique Asian Porcelain Art Show." The exhibit will be held from 2 to 6 p.m. Sunday, April 26, at the Moose Lodge, 2524 Grand Island Blvd., Grand Island. There is no charge for the exhibition. (Photo by Karen Carr Keefe)

Portraits in porcelain: Doring to display artistry in April 26 exhibit

Chie Doring knew she wanted to be an artist when she was just a young girl growing up in Japan. Now, at age 92, the award-winning artist and longtime Grand Island resident is planning to celebrate a retrospective of her paintings in “A Unique Asian Porcelain Art Show” this spring.

The exhibit will be held from 2 to 6 p.m. Sunday, April 26, at the Moose Lodge, 2524 Grand Island Blvd., Grand Island. The 20 pieces of porcelain art in the show will be displayed in the social area in the front of the lodge. Hors d’oeuvres will be served in the back room. None of the work will be for sale.

Doring has had a lifelong passion for creating art. She said that as a child in her native Japan, she would carry a paper and pencil around and was always sketching. Her first memories as an artist are of seeing an inspiring face, or something beautiful in nature and wanting to capture the image with her paints. “That was the motivation since I was a little girl,” she said. “I feel like I bond with something … like a mother with a baby.” She has a special affinity for painting faces, especially those of little girls. Her paintings – decorated pitchers and plaques and especially portraits – adorn the gracious and serene home she shares with her husband Realtor Floyd Doring.

Chie Doring’s artwork, created in the course of a 50-year career, features a blend of gentle and deep hues of purple, gold, peach, pink, blue and green. She mixes pigments with mineral oil, then applies them with delicacy and precision. She fires them in her kiln, perhaps as many as 10 or 12 times to achieve the desired shades in the flowers, faces of young girls, angels and heavenly scenery that are the hallmarks of her artistry. Some pieces have taken as much as a year of painstaking work to complete. It is an art form that requires patience. She gives credit to her first teacher, Viola Heimback of Tonawanda, for lessons in painting and patience.

Doring has won state awards and national recognition for her porcelain artworks, known as China painting. Named a Citizen of the Year in 2000 by the Grand Island Chamber of Commerce, the writeup singled out two works, in particular, that have earned her acclaim, the first in 1998. “A 12-inch water pitcher on which she painted bunches of grapes in four colors was selected from the New York State Convention display table to be exhibited for one year at the Porcelain Art Museum in Oklahoma City. … In 2000, a 10 ½-inch plate containing the portrait of two young girls took first place statewide and is on permanent display at the Oklahoma City Museum.”

Fellow artist Angelo F. LaDuca has praised her artwork as exceptional. “The precision and detail of her work demonstrates her insight into seeing things that people do not ordinarily see when they look at art. And her colors are exceptional,” he said. LaDuca, also a real estate broker, has had his work exhibited locally. He is helping to curate the works that will be displayed.

Floyd Doring is proud of his wife’s artistic achievements. “She has a wonderful talent – both China painting and oil painting – and doing the Japanese flowers, and the birds. Her work and herself, personally – are over the moon,” he said.

Chie Tanaka and Floyd Doring met in Japan while she was a registered nurse at a U.S. military hospital in Saporro and he was a medic in the Air Force. On one of their first dates in Japan, they went to see the movie, “Niagara,” starring Marilyn Monroe. “Floyd said, ‘That’s where I come from,’” she recalls. They married in 1958 and moved to Niagara Falls when she was 30, living there two years before moving to Grand Island. Chie says that moving to America was exciting, but she worried about how she would get along in a culture that was new to her. She found a job right away in nursing, but without an American license, she couldn’t practice as a registered nurse unless she went back to school, so she was hired as a nurse’s aide, a job she held for several years. But it wasn’t long before she pursued her true passion – painting.

She believes that her Japanese upbringing definitely influences her style as an artist.

“I’m still kind of Japanese inside,” she said. “I grew up to be a lady, always.”

And why she still paints at age 92? “I always want to create my feelings to the art. I want to paint beautiful things.” In portraits, she finds her greatest challenge and is not content to confine her subjects to the flat canvas. “I want people to be alive, so I put a lot of effort in eyes.” She said a lot of people tell her that the eyes in her portraits follow them as they walk by. “One time, a lady looked at that little girl and she fell off the step,” she said, pointing to a stairway near her portrait of an angelic-looking young girl with riveting blue eyes. “ 'I was looking at her eyes – I forgot the step,’ ” she quoted the woman as saying.

A team of friends and community leaders is helping Chie Doring to launch the show. “We’re all excited about this,” Floyd Doring said.

The impetus for the exhibit came from Mary Ehde, a longtime member of the Grand Island Moose who served as an officer in many capacities, including several terms in the club’s highest office, senior regent.

Ehde and a friend, Rick Williams, thought of the idea of an art show featuring Doring’s work two years ago, when the artist turned 90. “Well, we brought it up again this year, right around her 92nd birthday and she said, ‘I’d love to do that. Can we do it here (at the Moose Lodge), where all my friends are?’” The venue sounded perfect to both the lodge members and the Dorings.

Ehde had been very impressed when seeing the artwork Doring displayed in her home. Ehde said she thought a wider audience should see and appreciate her friend’s art – not just the people who know Doring. “

Ehde said the show is going to be a unique occasion that combines the art exhibit with a membership drive outreach event for the Moose Lodge, which has a long history of giving back to the community. Through the years, the Lodge has raised funds to help various charitable groups, including Make-A-Wish Foundation, local sports teams and the Niagara Falls High School band. The Lodge also has sponsored a kids’ zone at the annual Grand Island Father’s Day Mary Dunbar-Daluisio Memorial Lawnmower Race and Kevin Doring Memorial 5K Walk/Run and Car Show, a fundraiser for the Island’s American Cancer Society Relay For Life.

The partnership between the artist and the Moose Lodge may be uncommon, but its organizers are predicting success.

“I think the show is going to be awesome,” Floyd Doring said. “I think Grand Island needs something like this, some kind of pick-me-up for culture, which hasn’t been done in many, many years.” He said the when the art society on the Island disbanded about 20 years ago, it left a void that the April 26 show will help fill.

Ehde and the organizing team are bringing to fruition the vision she had for the art exhibit and she’s confident that the setting will showcase Doring’s work in an elegant way.

“We’re going to have this place looking so classy, people will think they’re in ‘Brigadoon.’ ” 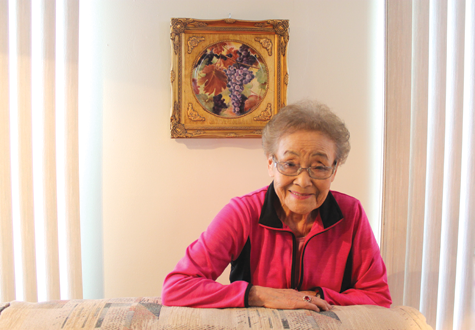 Chie with a porcelain painting of golden fruit. (Photo by Karen Carr Keefe)