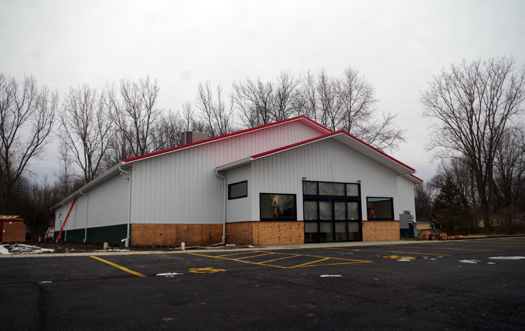 The new building, at 3338 Niagara Falls Blvd., will house all of the Pellicano's Marketplace's foods and customer service with a little more room to move than the last location, which is just up the street.

Pellicano’s Marketplace has been a staple in Wheatfield since 1986. When Paul Pellicano opened the shop, he unveiled gourmet grocery items to the public, right on Niagara Falls Boulevard.

However, because Pellicano’s Marketplace has so much to give, and so little space to give it, the business has been planning to move for over two years.

Luckily, they found a place just down the street.

“We wanted to stay in Wheatfield,” said Paul’s son, Chris Pellicano, who manages the store. “That was our goal. We didn’t want to have to leave. You can’t go too far from where you are or you’ll find it’s difficult for the customers. Finding a location on the boulevard was difficult, but we were lucky enough to find a couple pieces of property that were on sale, three blocks from where we are now.”

The reasons for the move are almost painfully obvious for anyone who’s been in Pellicano’s. The food is excellent, members of the staff know what pairs well with what, the meat is quality, cut by Paul Pellicano himself.

But the space? It can get a little crowded, Chris admitted.

“It’s a little too tight,” he said. “That was one of the concerns when we were building our new store. They (customers) like our small feel. They like how low the ceilings are, they like how tight the aisles are. … (But) we saw there was a need for slightly wider aisles, meaning, an aisle you can get two shopping carts down. Right now you really can only get one, and it makes it difficult for people who want to do a lot of shopping here.”

Difficult, but no one is complaining.

“The thing about all of their customers is they never complain,” Chris said. “They’re just happy that we’re here for the neighborhood. We are a neighborhood store and we happen to be lucky enough that the neighborhood is Western New York.”

What Pellicano’s has that attracts and holds customers is the “customer service ideal” Chris talks about.

“We try to have our employees taste as many of the foods as they can,” he said. “We try to explain to them where cheeses come from, what’s good with this, what runs well with this. They can then tell our customers, ‘Hey, you’re getting this? You got to try it with this!’ or, ‘Hey, we just got this in! It’s really good!’ We have employees, they actually know what a customer wants, because they have their regular orders. … Customer walks up, and they just say, ‘Hi Greg!’ and they wait on them and just start serving them stuff, and then they give everything, to say, Greg, and away he goes! He’s happy; he’s great. You don’t get that at a big box store.”

Chris said Wheatfield officials have been very helpful with the move. Both the old and the new sites are next door to one another, and both are zoned commercial, making the transition easy for the Pellicano’s and the town.

“The town’s actually been great,” he said. “When we say we’ve had some obstacles or some things in our way, some people say, ‘Oh, did the town give you a problem?’ We’re like, ‘No!’ They have their rules and regulations and laws that they have to follow, but we follow them. … Why create that issue? Let’s just do everything they ask. It’s a working relationship, we’re going to be in Wheatfield for the rest of our lives.”

“When they decided to stay in Wheatfield, because they loved the community, I was thrilled,” Town of Wheatfield Supervisor Don MacSwan said. “It’s a real plus for Wheatfield. Everybody goes there. ... They are a unique store.”

Paul Pellicano immigrated into the Lockport-area from Italy at the young age of 13 in 1958 with some siblings and his mother, joining his father who was already settled.

“They were instilled with a hard work ethic, from their parents,” Chris said.

After working for Topps for a few years, becoming a butcher, and owning a franchise (which was shut down after the company it was affiliated with folded), Paul started his own business. Pellicano’s Marketplace was born.

The second generation came around when Chris, who worked at his brother’s manufacturing factory for almost four years after graduating from Canisius College for business, joined his father at the marketplace.

Chris said working at his brother's gave him a lot of experience, but eventually he realized it wasn’t for him. He told his brother he wanted something else, and that’s how the Marketplace came to be where it is today.

“My father found out I was looking to move out of state,” Chris said, laughing. “He was like, ‘Whoa, whoa, whoa. You’re not going anywhere.’

“He said, ‘We’re doing OK over here, I think you could help make us grow. Why don’t you come over?’ ”

Chris did come over, and today, after six years, he said it’s been great.

“It’s my father, with his passion to take care of the customers and just give out quality product,” Chris said. “And my knowledge in technology.”

The Marketplace moved to its new location over the weekend and, as of Thursday, invites customers, regulars and newcomers to check out the new store at 3338 Niagara Falls Blvd.

More information can be found at Pellicano’s Marketplace on Facebook, as well as www.pellicanosmarketplace.com.