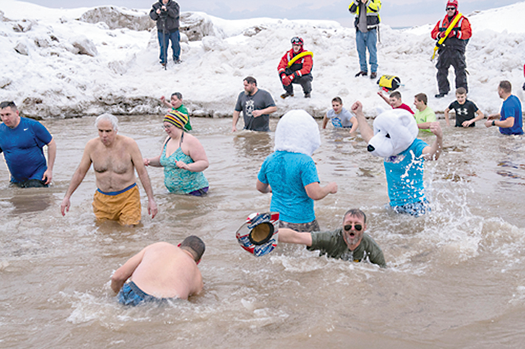 Buffalo-Niagara certainly appears to be getting off easy this time around when it comes to dealing with our winter weather. Plainly put, it’s been a dull one, with milder temperatures more often than not dictating the weather patterns.

We’ve seen slightly above-normal precipitation – mostly in the form of rain – and very insignificant snow totals telling the tale this year. Local data from the Niagara County Weather Wire revealed a scant 11.10 inches of snow has fallen in Niagara County in February, and a season total of just 55.10 inches of snow since last November – both well off the long-term averages.

Heck, Lake Ontario’s water temperature is hovering at 37 degrees in February – normally one of our coldest months. Even more telling is Lake Erie – which has averaged close to 100% ice cover in past years – thus far is all of 7.5% ice covered.

Well, so much for winter.

That is, except for Olcott Lions 51st annual Swim for Sight. It’s next Sunday, March 1, in Olcott Beach!

The Olcott Lions Club, organizers of this annual dive into the chilly, murky waters of Lake Ontario (dubbed WNY’s oldest charity swim) said registration – and interest – has been strong and continues along at a good rate with another healthy count expected to hit the water. Last year’s swim, held in more typical WNY winter weather, saw 400 hearty souls taking the plunge, joined by hundreds of their friends and visitors in the hamlet of Olcott.

“This week or two prior to the Polar Bear Swim for Sight are an active time as swimmers register online and use social media links to contact friends who help them with fundraising,” said event Chairman Bill Clark of the Olcott Lions Club. “Other swimmers raise funds from co-workers, family and friends and register onsite the day of the swim, March 1.”

Clark said swimmers who are able to raise $150 or more will receive a polar bear hoodie, while those collecting $500 or more can pick up a cool Polar Bear swim jacket for their efforts.

“Minimum contribution is $25 when they register online and $30 if they register onsite. All swimmers receive a Swim for Sight T-shirt and those registering online who raise $150 or more also receive a logo embossed knit cap,” he said.

So, we’ve been hearing of late about those high Lake Ontario water levels, which, come next Sunday, are also expected to be ice-free. Will those conditions have any effect on either the swim or any of the fun-filled events leading up to it – the Polar Bear Queen Contest for one?

“High water on the lake will not impact the swim. It reduces the amount of beachfront, but there is still plenty of space,” Clark said.

As to the lack of ice – well, that has happened before at past swims, and, snow or no snow, Clark said swimmers will swim. The Lions and first responders, meanwhile, will be onsite and more than ready, as they’ve been over the years.

“It’s not likely there will be ice on the lakeshore this year, but the water temperature will still hover around a bone-chilling 36 degrees. Most years the weather is seasonal with temps in the 30s and a brisk wind off the lake, but occasionally we have a mild spring day with sun – the swimmers and spectators love it,” Clark said.

The event gets underway at 9 a.m. with Bills-style tailgate parking parties taking place on the streets and at Krull County Park, site of the annual lake plunge.

“Swim registration is from 10 a.m. to 2 p.m. The Buffalo Brass Machine will lead the parade of polar bears up Main Street, and Queen contestants gather at the Lions pavilion prior to going to the beach,” Clark said.

As to the eats, there will be plenty available for this one.

“Firefighters chili, chicken chowder, Lions Club sandwiches, meat sticks and other food choices are available on Main Street through the day,” Clark said. “There are also street vendors. You can purchase Polar Bear mugs, Girl Scout cookies and (the) previous year’s swim shirts. All of Olcott’s restaurants will be open to make it a great day for everyone.”

Clark called it “A day of fun for a great cause.”

“(It’s) our 51st year – the Swim for Sight is one of the longest-running charitable events in Niagara County,” he explained. “Many swimmers return each year, and many are the sons and daughters, even grandchildren, of those who participated in early years.

“Look, people like the late winter date of the swim; it’s still cold, but spring is around the corner and it’s a great time to get outside, connect with friends, and share excitement for a new season ahead.”

For more information or to register, visit www.olcottlions.org. 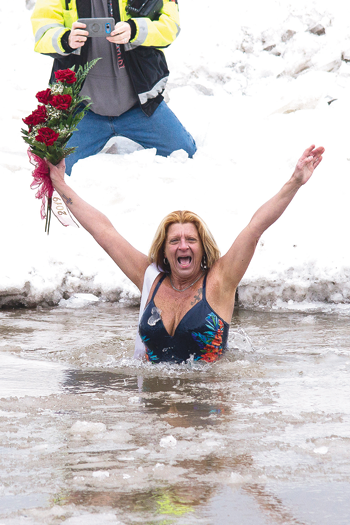