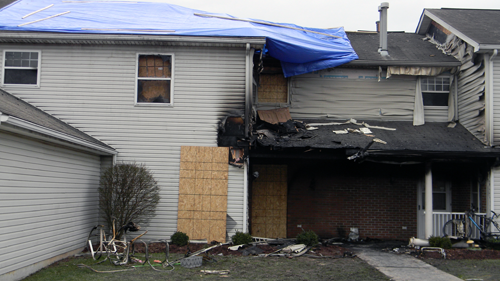 A look at what's left of the apartment units this week. (Photo by Terry Duffy)

Area fire company investigators are continuing their probe into a tragic fire that disrupted residents in two Lewiston apartments.

According to Fire Chief Les Myers, at 10:33 p.m. Saturday, Feb. 1, Lewiston No. 1 responders were dispatched to a reported structure fire at the Woods at Blairville apartment complex on the 800 block of Oriole Lane. Additional engines from Upper Mountain Fire Co., Youngstown Volunteer Fire Co. and Ransomville Volunteer Fire Co., along with a ladder truck from Niagara Active Hose, were dispatched immediately due to the size of the complex.

Crews were faced with heavy fire in two apartments upon arrival and immediately deployed to begin knocking back the flames as additional crews entered to search for anyone still inside. Myers said the fire was knocked down quickly and credited the fast and efficient teamwork by all companies involved. During operations, two patients were identified and a dog was rescued from an adjoining apartment and reunited with its owner.

One female resident suffered burns and airway injuries when attempting to put out the fire; she was transported by Lewiston No. 1 to ECMC in Buffalo. Another resident was transported to Mount St. Mary’s Hospital for minor smoke inhalation. The two apartments were completely destroyed while other apartments suffered smoke damage. No firefighters were injured during the incident.

“We’re happy with the stop we made in the two apartments we were able to contain it to, because we’ve seen apartment complexes like this go from one end to the other,” Myers told local news sources this week.

Myers said Wilson Fire Co. and Lewiston Fire Co. No. 2 were all placed on fire standby at the fire. In addition, Youngstown and Tri-Community Ambulance who were brought in to provide EMS coverage while both Lewiston No. 1 ambulances were transporting patients.

Meanwhile, investigators from the Town of Lewiston Fire Prevention Bureau and Niagara County Origin and Cause Teams were on location this week to determine the cause of the fire.

As families from the two apartments continue to struggle, members of the Lewiston community have begun to come to their aid.

Lewiston-Porter ESL instructor Jacey Diez, who described herself as a neighbor, opened a GoFundMe page to assist one affected family, which includes young children. Family members were listed as Brittany, with children Jayden, Noah and Andriana.

“The family is safe, however they lost everything,” Diez said.

She noted the family is in particular need of new children’s clothing such as boys tops (sizes 10/12) and boys bottoms (sizes 10/12 slim and husky), size 7/8 girls tops and bottoms and size 10/12 women’s pants and tops for an adult female. Also sought are gift cards for groceries.

“Please say a prayer for my neighbors and consider donating to the families who were affected and are in need,” Diez said.

As of Thursday, a total of $2,780 had been raised out of $10,000 sought on Diez’s GoFundMe account. To donate or for more information, visit https://www.gofundme.com/f/t29ury-family-of-four-loses-everything-in-fire?utm_source=facebook&utm_medium=social&utm_campaign=m_pd+share-sheet&fbclid=IwAR3m-YTbMIVmYn3ok9vuqdEI-yfvbcxixFOgjndRSeJLrXIjBZfC0kIZjlk.

Still another Facebook post was online this week from Lewiston resident Kaya Joy Bax of Pinnacle Community Services, seeking to assist a single mother with three young children from the incident.

Her Facebook post reads, “On the night of February 1st family members of mine, Stephanie Sansalone (with boyfriend Chris and son Carson) and Danielle Kimble (with husband Travis and son Ryder) experienced a fire at their apartment complex. Thankfully, they all made it out safe.

“Though we are grateful none of them were hurt they lost everything. There is a 4-year-old boy, Carson, who lost all his toys, clothing, completely everything. And a 6-month-old boy whose possessions were destroyed. This was a traumatic event for them and we cannot express how grateful we are for the support everyone has given.

“To update everyone, both families have found new housing. They are both starting the process of rebuilding their lives and starting from scratch. They are in need of everything. From silverware to furniture, they are having to start over. So all of your donations, every dollar, is being well spent, and so appreciated. Thank you everyone and if you can continue to share this post so we can raise all the finances these family’s need.”