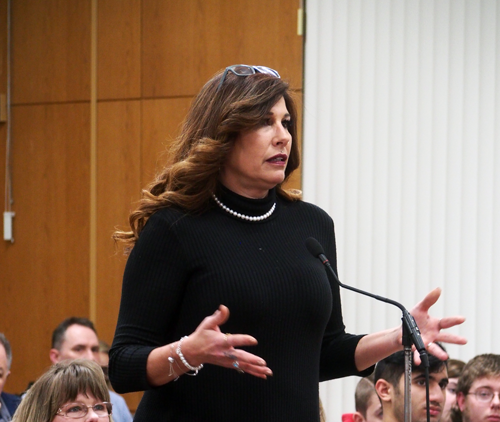 Deborah Marinaccio was one of the speakers at a public hearing on a aggressive solicitation law that was approved on Monday by the Town Board. (Photo by Alice Gerard)

Property damage, theft, and people being approached at private events by aggressive panhandlers were issues addressed by Ralph Lommer, former board member of the Grand Island Moose Lodge. He was one of a group of people who spoke at a public hearing at the Feb. 3 Grand Island Town Board meeting on a local law regulating aggressive panhandling on public property.

Penalties can be imposed for this noncriminal violation that range from a fine of $25 to $250 for the first violation and the imposition of a jail sentence of not more than 15 days for a second conviction that occurs within 12 months of the first. The court also has the option of imposing an “appropriate alternative sentence,” as well.

Town Board member Tom Digati said, “The law was written because of a number of complaints that were made to the Town Board, the police, and on social media forums from residents and business owners. The complaints have been steady, and it became clear that this wasn’t just a couple of people politely asking for money.”

“The purpose (of the law) is to give the police the mechanism to remove people from the property,” Digati said. He said that, until this ordinance was passed, no law existed to address aggressive panhandling. As a result, the police could not take any action.

“We are a welcoming community that cares about its neighbors and people who are down on their luck. We should be doing what we can to help them out. But in instances like these, where people are making residents uncomfortable and impacting our businesses, that’s a problem, and that we can’t have,” Digati explained.

The panhandling issue has impacted the Moose Lodge, said Lommer. “They come over and bother our people if our people go out to smoke. They are mooching cigarettes. There are things that get destroyed, things being stolen, and we know it’s (panhandlers). They approach everybody when we have a party. Our members have a get-together, a family reunion, a graduation. They are there, mooching off of people, begging people for money, begging people for cigarettes,” Lommer explained. He said that panhandlers, who were looking for cigarette butts to smoke, destroyed three cigarette butt holders outside of the building, adding that they also destroyed a plastic structure that holds bags of beer cans. Six bags, containing 300 beer cans each, were taken. In one instance, a woman came into the Moose Lodge and attempted to sell large containers of aspirin, saying that she didn’t need the medication. Lommer told her to leave.

He described a barmaid with more than 20 years’ experience as being “scared to close up at night because she saw them in the parking lot. What do we do next?”

Lommer said that the Moose Lodge has installed surveillance cameras to protect its property.

Digati said that he and Town Supervisor John Whitney had been discussing the situation, as well as how to handle it. “Last week, we were down at Lou’s Island Auto Clinic, and we saw a woman. She left and went over to the Moose Lodge. Then she walked down the boulevard. When John and I were on our way back to Town Hall, we stopped at the intersection of Grand Island Boulevard and Baseline Road, and we saw her walk up to a parked car at Walgreen’s.”

“People were being approached at ATM machines, children were being approached outside and inside of dance classes, and people were being followed into businesses,” Digati said. “The more we looked into it, the more it became clear that this was an issue for residents and business owners. We started looking at potential solutions. One big problem was the ability, or more appropriately, the lack of the ability for the police to remove these people from parking lots and public areas. Panhandling is a protected form of free speech and is not illegal. In fact, the law we passed does not prohibit panhandling.”

Digati added that the law also protects panhandlers. “I’ve worked downtown, and I’ve dealt with people asking for money. It’s really not a big deal for me. But if I was sitting in my car at an ATM, and somebody approached me, asking for money, I would feel uncomfortable. There are plenty of people out there who have guns, who have weapons. This is really for the safety of the people who are out there, doing the begging, too, because it’s only a matter of time before one of them gets hurt.”

Whitney said, “I think that this (law) is a good start. We can certainly go from here but many mentioned the aggressiveness, and we have to start somewhere.”

Digati added, “We know that there are business owners sitting here who didn’t come up and speak. It (the law) is a step in the right direction. It’s certainly not going to be an instant fix. We are not claiming that is the case. We are doing what we can. Talk to us. Share your opinion because we have got to do something to help our businesses.”

Speakers at the public hearing agreed that people who ask for money was not the issue for them. According to Tricia Palmeri, “I’m not against people asking for money in their time of need. But it doesn’t need to get to the aggressive harassment, terrifying stage that our children are experiencing.” Deborah Marinaccio, whose family owns Lou’s Island Auto Clinic, said, “If someone approaches me and says, ‘Do you have some change or a couple bucks or something?’ I’m really not that person who is going to say, ‘No, go hungry.’ I’m always willing to help. But they approach our elderly, our women alone at night. It is scary and not indicative of the Island.”

Marinaccio said, “Our clients are constantly harassed. I called the police on a man the other night. He came in acting crazy and sketchy. He actually scared us.”

According to Palmeri, “I’ve had a couple of my son’s classmates tell me stories, how they’ve been approached at the gas station getting gas. The person asking them for money actually grabbed the car door and yanked it out. To a female teen, this is very terrifying.”

Diane Phillips, who runs Dollar General in the Grand Island Plaza said, “We’ve received phone calls from customers who “will drive right by if they see them (the panhandlers) in the parking lot. We’ve literally walked customers out to their cars in the middle of the afternoon.”

Tina Taylor said that aggressive panhandlers enter the dance studio, where her daughter takes classes. “She’s been there a couple of times when they’ve come into the dance studio. And the dance teachers, some as young as 20 years old, have to rush all of the kids into the back room. They’re scared. They are 12 years old.”

After the Town Board meeting was over, Digati related that “A woman approached me and I said, ‘I don’t have anything for you tonight.’ She then went to Mike Madigan’s car and startled him because Mike was on the phone and didn’t see her approach.”

Digati said, “ You have to call the police. The law doesn’t do any good if we’re just going to ignore it. Just go about your life and, if something happens, give a call.” He also suggested that business owners install security cameras for surveillance and that, if there is property damage, criminal charges can be filed.