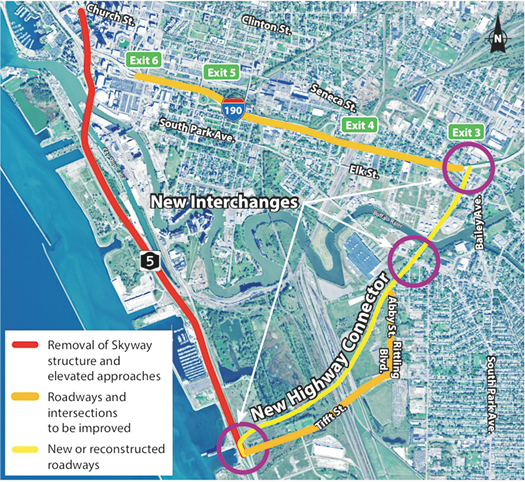 Shown is the New York State Department of Transportation design concept that involves the building of a new highway connector from Tifft Street to the I-90 near Exit 3 at Seneca Street. (DOT photo)

As the 2020s begin to grow on us, the buzzword “new” is becoming common in Buffalo-Niagara. As in new faces, new opportunities, new attractions, a new spirit and new attitude.

How about new transportation options? Up in Niagara County, we’re already seeing changes with removal of stretches of the Niagara Scenic Parkway in the Falls and replaced by new parks with trail systems moving out toward the lake.

And just this past week, Buffalo-Niagara area residents learned more on a significant new transportation option that has been growing in momentum over the past several months: replacing the Skyway.

A decades-old fixture on the Buffalo waterfront, the Skyway dates from the early 1950s. While long serving the region as a key commuter route from downtown Buffalo to the southtowns, not to mention providing a great vista to the Buffalo waterfront and Lake Erie, this elevated aging structure – much like the Grand Island bridges in some senses – has come under criticism from many circles for its obsolete design, maintenance, traffic and safety issues. Currently, the Skyway serves as the main traffic corridor for an estimated 46,000 vehicles and 5,000 to 7,000 commercial trucks on a daily basis.

Removing it and replacing it is no small matter.

On Tuesday, the New York State Department of Transportation formalized its notice of intent on a potential Skyway replacement project with the first of a series of scoping meetings. According to DOT, these meetings are intended to determine “the scope of issues to be addressed and for identifying the significant issues related to a proposed plan.”

For the Skyway, DOT is now considering a plan to remove approximately 3.5 miles of interchanges, highway approaches and infrastructure on the span extending from Church Street in downtown Buffalo to Tifft Street in the Outer Harbor area.

“Probably the biggest difference is where they are located,” said Susan Surdej, DOT regional public information officer and engineer, as she compared the two bridge spans. Surdej led a series of DOT scoping sessions this week in Lackawanna and Hamburg, intended to educate the public on the proposed Skyway demolition and replacement project, one that’s expected be massive and cost in the “hundreds of millions of dollars.”

“The Skyway has become a physical and visual barrier to waterfront development,” Surdej said, as she referred to the past criticisms by various officials, including 26th District U.S. Rep. Brian Higgins and Gov. Andrew Cuomo. “Not only waterfront development, but recreational on the waterfront and mixed-use development. It has served a long and useful life; so now we’re in the scoping phase to look at alternatives.”

Currently, DOT is considering some 25 different design concepts as it mulls the Skyway’s future. Sixteen came from Cuomo’s recent Skyway alternative competition of community interests, and nine are from DOT engineers and designers.

“Those 16 concepts are still in the mix, as well as those concepts that have been developed by the Department of Transportation and our consulting partners,” Surdej said.

Highlighting the list is the “City of Lights” proposal that won the recent state competition. Its features include retaining a portion of the elevated Skyway as a park for biking and pedestrian use, while removing all approaches to the highway and replacing it via a new highway connection off Tifft Street on the lakeshore to the I-190; a new lift bridge across the City Ship Canal to connect Michigan Avenue to Fuhrman Boulevard; and improvements to four exits along the I-190 in South Buffalo.

Others concepts in the mix include:

•Removing the Skyway completely and replacing it with a new dedicated highway connector from Tifft Street to the I-90 near Exit 3 at Seneca Street.

•Complete removal of the Skyway; replacing it with an arterial that would connect to Tifft Street with improvements and connections on south Buffalo streets from the I-190 at Exit 3 at Seneca Street.

Surdej said a tunnel is also under consideration among the proposals.

“There are two or three concepts that do involve a tunnel that we’re looking at. As we proceed through scoping and into our draft environmental impact statement, each of those concepts is going to be analyzed, for economic and social impacts, traffic impacts,” she said. “Traffic impacts, obviously, are huge. So now we have to look at each and every one and analyze them, and pare those down to a smaller group of reasonable alternatives to further study. And then ultimately at the end of our environmental impact statement, which will be in two years, we’re going to have a preferred alternative.”

As to a final cost, Surdej said that would not be available until DOT reaches its preferred alternative.

“We’re in the process of analyzing all of that now,” she said. “The concepts range greatly, so it really depends on the concept that we’re thinking about. No ballpark figure at this point, but obviously we’re talking hundreds of millions of dollars.

“There’s no defined cost for this project at this point, because we’re not at the preferred alternative. So, it’s really important at this point that the residents, the commuters, the businesses could give us their input; we need to know what they need, what they want, what’s going to work for them. We’re in the data collection stage, and then we’re going to dive deep in the analysis, and then pare down to some reasonable alternatives.”

While concentrated in downtown Buffalo and points south, Surdej called the Skyway a regional project that impacts all of Buffalo-Niagara. She encouraged interest and input from residents.

“So, it’s really a process that the whole community has to be involved in.”

Surdej said DOT would take public comments on its 25 design concepts until Feb. 28.

“This is just the first of the public comment process. As we work further down the draft impact statement process, we’re going to get to the point of a public hearing. It will be in early fall, and that, again, that’s another opportunity for the public to come back. We’ll get some pared-down alternatives, and provide meaningful feedback,” she said.

To view the Skyway proposals and provide feedback to DOT, visit www.buffaloskyway.dot.ny.gov.