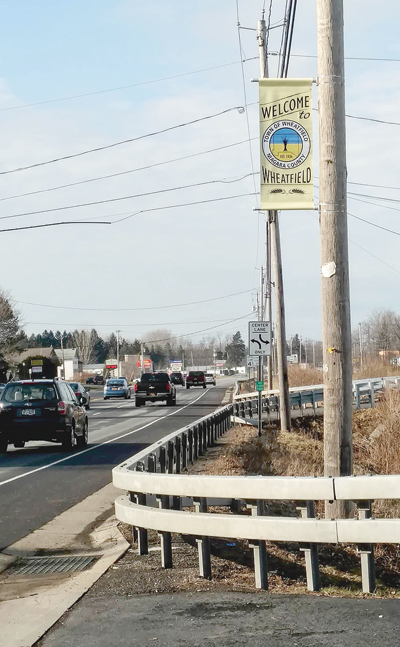 Pictured is one of the banners placed along Niagara Falls Boulevard.

Nine banners have been put up along Niagara Falls Boulevard in the Town of Wheatfield, and one more at the Town Hall campus to welcome visitors, residents and commuters to the town. The idea is to make citizens proud to be a part of the town, and put an earworm into everyone else’s brain about this place.

“The Wheatfield Enhancement Volunteers is a group of residents who are very passionate about the town that we live in,” said Councilman Curt Doktor, liaison to the group. “We take on initiatives that aim to make the town even better. That’s what it is.”

Doktor said the group has a broad scope.

“We peel off initiatives when there’s a need,” he said. “The Niagara Falls Boulevard banners initiative is a great example of what we do. Niagara Falls Boulevard is really the key entrance to Wheatfield. Thousands of vehicles pass through there every day. Some are residents, some are maybe visiting, and some are maybe just passing through. The Wheatfield Enhancement Volunteers started with a goal to increase visibility of the Town of Wheatfield and help beautify the drive through Wheatfield along the boulevard. We really wanted people to know that they are passing through our town that we are so proud of.”

Rita Kontak is a member of the Wheatfield Enhancement Volunteers and was one of the first to propose the initiative.

“The group stems from the town’s comprehensive master plan, which originated in about 2004,” Kontak said. “One of the ideas expressed in there is the improvement of the image of Niagara Falls Boulevard. If you drive through Wheatfield – it is pretty sad – because there’s brush growing along the roadway. There’s a lot of dumping there. There is a need for improvement.”

“It’s the major roadway through the town, and we are striving to improve it and impress upon people that they are in Wheatfield,” Kontak continued. “Wheatfield doesn’t have its own post office. We have three Zip codes in the town and none of them are called Wheatfield. We’ve got Niagara Falls, we’ve got Sanborn and we have North Tonawanda. If you went to a Zip code directory site or a post office, you wouldn’t exactly come up with a number, I don’t believe, for Wheatfield. It has a lot of connotations. If people in industry or any kind of business looked for us, they would not have an easy time finding the Town of Wheatfield.

“We’re doing our best to improve the impact and the awareness of people driving through Wheatfield.”

And the group is not stopping there.

“The idea was to start small, get a base hit rather than try to hit a home run, and do a little testing with the 10 banners we got up,” Doktor said. “I think it’s really just the tip of the iceberg – all the things we’re hoping to do along the boulevard – in order to meet our objectives. I think it’s more likely that we will see additional or different enhancements.”

The most similar initiative to these banners also brings up a word of caution and practical engineering for this new beautifying effort for Wheatfield and Niagara Falls Boulevard. Kontak said she remembers the spectacle well.

“During one of our former supervisor administrations, he had put up some flags on all the flagpoles going through Wheatfield,” she said. “At the time, it was a very impressive statement. Being in Wheatfield, myself, for over 40 years, I remember it vividly.

“But I also remember the fact that as time went on, the flags sustained a lot of damage, because it’s a very windy road at times. The flags would get wound up on their flagpoles. They would get knocked down and lay on the ground. It was a lot of disrespect for the American flag.”

Not to see history repeat, the group did its research.

“We tried to come up with a different concept and driving through some of the communities in this area, they’re doing this kind of a thing. There’s some in North Tonawanda, that area. There’s actually a small display of them in the Sanborn area. If you ever go to Russell Salvatore’s restaurant, where he has a tribute to the war efforts of the United States, he has these along the pathway,” Kontak said. “It was just the inspiration point for starting something like this.”

The banners are taller than wide and while a passing driver would never know, there are slits cut into them, height-wise, which allows air to pass through rather than push the banner off its mountings.

“The slits enable the wind to pass through the banners without creating a lot of motion that could affect their structure,” Kontak said.

Doktor and Kontak said there about six or seven members of the Wheatfield Enhancement Volunteers, including themselves. Funding for the group and the project comes from a budget allocated by the town. The group was formerly named the Comprehensive Plan Task Force, and has had a budget for over 20 years, said Doktor. He also said other purposes from that allocation over the years were used to change town codes, including a solar law. This year the funds were used for the banners, coming in as less than $4,000 for the entire project.

“We’re in the process of planning what our next objective will be for Niagara Falls beautification,” Doktor said. “Everyone should stay tuned to see what that next thing will be. Or, if they’re interested in helping shape what that next thing will be, anyone is welcome to join. The best way to get involved is they can contact me, the easiest way is typically via email and I can be reached at [email protected] or anybody can stop at the Town Hall campus and talk to the clerk as well and she’ll be able to connect them with myself or Rita Kontak.”

As for this project, Kontak expressed hope for its future.

“I hope it instills a pride that people will talk amongst themselves about in a positive way. As we work towards improving the appearance of Niagara Falls Boulevard, visitors will probably be the biggest group impacted by these efforts,” Kontak said.