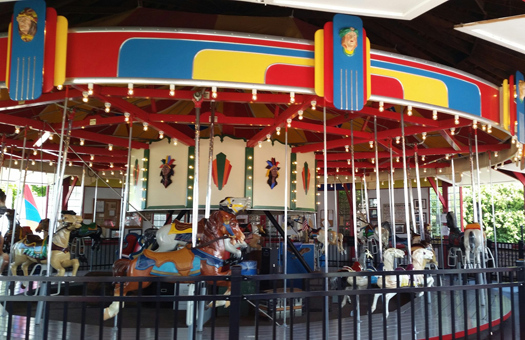 All remains quiet on the Lake Ontario shores in Olcott as debate continues in many circles on IJC Plan 2014. But that doesn’t mean other, more exciting discussions for the area’s summer seasons aren’t taking place.

This week, the Olcott Beach Carousel Park’s volunteer fundraising committee unveiled a rebranding of its long-popular mid-summer fundraiser known for the past 20 years as the “Jazz Sea Sunset.”

“Just in time to celebrate our 20th fundraiser, we are launching our new name – ‘The Park After Dark’ – an after-hours party with purpose,” said Gina Guido-Redden, fundraising chair for the Olcott Beach Carousel Park.

This event, held the second Tuesday in August, initially was a sailing venture at sunset, complete with a jazz band. It was eventually moved to the shore and, for many years, was held at the Olcott Yacht Club before being forced to relocate in 2107 due to rising floodwaters on the lake. It’s now held on the grounds of the historical Olcott Beach Carousel Park on the hamlet’s Main Street.

Guido-Redden said the purpose behind the rebrand “is to honor and highlight, not the party, but the purpose for the party” – the Carousel Park. She said this rebranding effort has been underway since 2018 to better reflect the nature of the Olcott Beach Carousel Park and the way funds raised from the event are used.

“The rebranding is not just in name only – every aspect of the event has been redesigned to celebrate the vintage amusement park and the child in all of us,” Guido-Redden said.

Set to take place Aug. 11, this year’s event will feature entertainment by The Sophisticats on the main stage, plus the addition of an as-yet-named “classic crooner.”

Beginning at 6 p.m. and continuing to 10 p.m., a number of adult events are scheduled throughout the evening. This includes cider and beer on tap at the Rialto Beer Garden; wine by the glass or bottle at Luna Park Landing; fresh popcorn and nacho stations; food service by Simply Tasteful; a carnival gaming midway; a Skee-Ball tournament; carousel derby races; an onsite fortune teller; a strolling musician; raffles and 50/50s; vintage vocals by Back in the Day under the circus tent; and the headliner with guest classic crooner.

Guido-Redden said all proceeds from “The Park After Dark’ will go solely toward the continued operations and maintenance of the Olcott Beach Carousel Park.

“We ask you to support the park association’s mission to keep a vintage amusement park open on Main Street, Olcott, with affordable prices for all. No one connected with the park or ‘The Park After Dark’ profits in any way. Attending is charitable giving at its purest, as the park and the event are completely enabled and sustained by volunteers, sponsors and donors alike,” she said. “ ‘The Park After Dark’ is a communitywide effort benefitting not only our park and community, but also people near and far; it reminds us of who we were, who we are, and who we hope our children grow to be.”

The Olcott Beach Carousel Park is located at 5979 Main St. For more information on “The Park After Dark,” visit the OB Carousel page on Facebook.