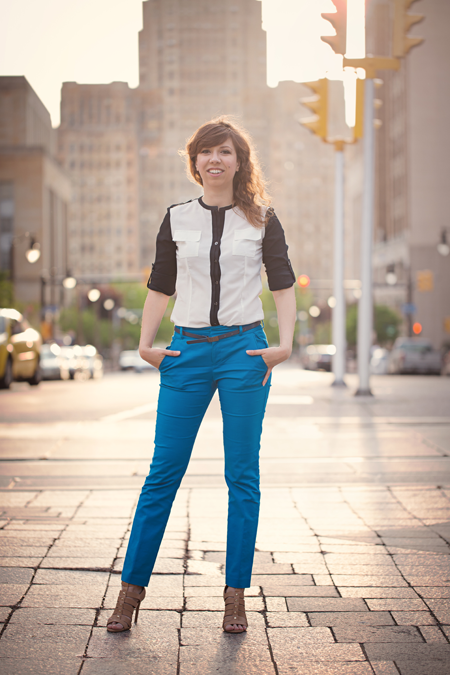 New face in Niagara making her mark in tech world

One of the neat attributes of life in Buffalo-Niagara – beyond this region’s vast amount of natural, historical, artistic and cultural qualities – is the constantly evolving entrepreneurship and insightful business talents of its residents.

As the 2020s begin, new faces and wonderful talents are becoming part of our scene, from the River Region to the Buffalo area and beyond. New faces, new development, new money, new residents.

Do you realize that little Buffalo-Niagara is ranked as one of the strongest go-to areas in the U.S. for millennials? Niche.com – among other online ranking engines – rates this region quite favorably as a place to live for young professionals. And it isn’t just our cheap housing -- how about new opportunity?

Buffalo-based M&T Bank for example, just last year signed on with Washington developer Doug Jemal to takeover almost one-half of the vacant 38-story Seneca Tower in downtown Buffalo with plans to fill it with 1,500 high-paying tech jobs this fall. Startup 43North is relocating there this spring. Others are in the mix, too -- downtown with new opportunities on the Buffalo-Niagara Medical Campus and in Niagara Falls with the enterprising startup TREC group of Niagara University. Google.com currently lists more 100 tech-related opportunities in this area.

Niagara Falls resident Lena Levine is one such person. Lena, a young millennial, came to Buffalo-Niagara in 2009 as a student from the southwest of Russia, that Eastern Europe area known to today as the Ukraine.

“I was a student. I ended up getting a job in the tech field. I also worked for a web development company -- Yahoo in Lockport,” she said.

Lena soon found a niche in this area that had appeal to her – working directly with people – with clients, not just code.

“I found I enjoyed working more with the businesses directly; (it was) more rewarding,” she said. “I was working more directly with clients; I found that to be a lot more interesting. I ended up freelancing for a while and doing my own thing, and that ended up evolving to running a full-time business.”

Today, Lena is founder and CEO of a web/app development company known as Forcoda, accessed at forcoda.com. Located on Ellicott Street in downtown Buffalo just south of the Buffalo Niagara Medical Campus, Forcoda, is a “full-cycle web development studio.” It concentrates on website, as well as app development – basically covering any and all wants and needs/services for companies of all types, from startups to the well-established. Forcoda’s client base includes such local notables as Rich Products, the University at Buffalo, Buffalo Niagara Association of Realtors, Value Home Centers, and Western New York Invention Convention. Also outside companies such as Shake Shack, Freshpet, Chobani, even the Australian Chamber Orchestra.

“We work with companies in all the stages. Recently we’ve seen more start-ups opening up in Buffalo … companies in the early stages. They might be the start-ups; they might be (in) the ‘precip phase’ or (needing) serious aid,” Lena said. “That’s our ‘sweet spots’ with start-ups. We help them. If they don’t have any existing product, we help them to shape it out, help them to do research, the market research, the discovery phase to identify their market challenges, their problems.

(“It’s) like, how can we implement that in the design direction, the product design?”

Discussing her work with startups, Lena continued, “It can be a website, it can be a web application, it could be a software service product, it can be a multiple application. Our focus is specializing in ‘constant projects’ (for the client), so I see what we do as a company is being a problem-solver. The customer comes to us with different challenges. They have something that already exists, but it’s super-complicated. Or they have so much data that it’s hard to comprehend it. So we can take what they have and simplify it – make it more user-friendly.

Speaking of web applications and the ever-changing technology behind their development, Lena noted working to balance consumer needs is a never-ending process.

“Technology over the past five to 10 years has become inseparable in our day-to-day lives, and now it’s more than just the websites. So you have technology, it gets into all these different areas of our lives … like the ‘smart assistance,’ like Alexa or Google phone, your smart home appliances, connecting to Twitter,” she explained. “With (business) marketing especially, you see more and more advertising agencies and the product companies using the innovative technologies like … man-ford reality – virtual reality to engage with the customers. That’s like a totally different game, like how do you stay on top of your customer lines? Those companies are always looking for new ways – like how do they get the attention of their customers? That’s the name of the game these days, like if you got the customer’s attention, then your business is growing. And everyone’s trying to fight for it, the social media, other channels, offline, that’s where we see more and more innovation happening. Just (that) companies try to find more ways (to do it).”

So how has an offering such as this taken off in Buffalo-Niagara?

“I’d say in the last five years we’ve seen some increase or accelerated growth in the start-ups technologies in Buffalo. The main contribution to that was 43North, so 43North started putting Buffalo on the map as a start-up hub and bring all these companies here. It does take (time) to grow organically and grow, even if you have the outside help or investment. It still takes time to catch up with other cities,” Lena said. “I would say, compared to 10 years ago, five years ago, what we have right now is we’re in much better shape. Now we have all these companies in Buffalo that are growing, and now we have a different problem, which is lack of talent, all these companies trying to hire aggressively, but there’s not enough ... universities, channels, they don’t supply enough talent to hire. So now this is like a different problem that we need to solve, it’s like the ‘chicken and the egg’ – what do you get first more talent or more companies?

“So, without trying to slow it at the same time, I think where we should focus next is creating either a common Buffalo, a boot camp here where people can spend six months, take this highly accelerated program where they can acquire coding skills, where they can get a job with most of the companies in the city. Especially being in a career in the tech field, which is a very high-demand market, you won’t be without a job. So it’s very a very available skill these days – how to write the software, how to build the applications.”

She said she sees this tech trend as getting more of a handle locally, in areas such as Niagara Falls.

“TREC is a brand-new Quark work space; they just opened up in downtown Niagara Falls and I’m really excited about it,” Lena said. “I’ve lived in the Falls for a couple of years (now), and I feel like the last 10 years, you know, compared to Buffalo, Niagara Falls (it has) made much smaller progress – innovation, web development.

“I found Patrick Krell was working at TREC ... he was the founder/executive director of the Innovations Center and the working space here at the (Buffalo Niagara) Medical Campus. So when I found he was working on this new project in Niagara Falls, (I became interested).”

For Niagara, she said the idea is focusing on the Cataract City’s greatest asset:  tourism.

“It’s highlighting those places; it’s a win-win for both tourists and businesses in the area, because tourists, when they come to Niagara Falls, are also looking for the places, things to do. And a lot of people don’t know all the great destinations that we have in the Niagara Region, besides Niagara Falls and the Niagara Gorge. People are always asking things, like ‘What is there is to do in Niagara Falls?’ Most people come to Niagara Falls by car, so they can drive to Lewiston, Youngstown, the wineries, so they can explore way outside of Niagara.”

And as far as furthering this, one suggestion might be greater connectivity.

“Starting with the businesses, the challenges are they’re not getting in front of the tourists. … The tourists don’t know that those places exist, which could be not just small places, but permanent places like even the Power Vista, where you can go and explore.

“One of the challenges we have is how can get those businesses in front of people. So one of the ways is kind of like integrating those businesses with others, infrastructures like Ready Bikes, it’s something that tourists can do when they come to the city. How can we combine the biking activity with exploring the businesses in a reachable area? It can be putting together like an app that guides customers, creates a customer route for people to explore by bike. Or like (involving) local jams, like local restaurants, bars that people can do to reach. So combining those things together, bringing these businesses and the community, it could be one of the ways to get those businesses on the map.

“So, really through the technology, like, it’s getting in front of the people when they plan their trip, or putting together some sort of resource like an app or where people can download and have access to things of interest, to what is going on in the area. We can also consult with businesses. Everyone has different objectives.”

One key she said is greater emphasis from the growing tech world to enlist even greater associations with others to further Falls’ tourism interests.

“I have faith; I know it’s going to come around; so I’m keeping an eye on the developments in the city. I have a feeling that it’s going to start,” Lena said.