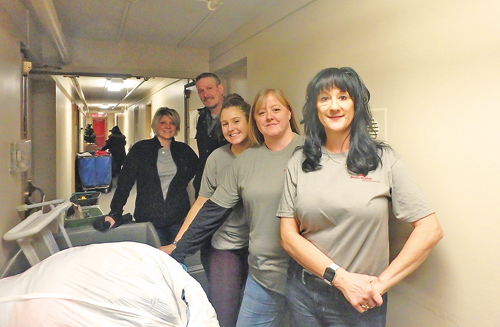 Rather than take the day off for the federal holiday, Dr. Martin Luther King Jr.’s birthday, BankOnBuffalo employees decided to turn their “day on,” by helping at Community Missions of Niagara Frontier’s Clothes Closet. Joining staff, the bankers worked organizing clothes at the Buffalo Avenue location, while volunteers from Damascus Baptist Church worked in the kitchen.

Community Missions Director of Ministry and Community Partnerships Rev. Mark Breese has been coordinating volunteers since September of 2005, when he accepted a part-time role in the agency.

“There’s the clothes closet, the food pantry, and the soup kitchen here that we need volunteers for every day,” he said. “When we have a day of service, we ask the regular volunteers to not come in that day, because we might have other service groups that might want to come in because of the day off from school.”

Annette Tomlin, vice president/community office manager for BankOnBuffalo, has been in touch with Community Missions for some time now. She decided this was the place to help out and give back. Tomlin brought a few co-workers to the agency’s main building to serve.

“The whole bank, the CNB bank – which BankOnBuffalo is a branch of – gave an opportunity for the employees to give back to the community,” Tomlin said. “I’m familiar with this organization. I love what they do for the community. They’ve helped so many people, so we made it our mission to come here and spend all day in the Clothes Closet, helping them organize things.”

Tomlin said all the clothes are free and donated to Community Missions, but they need sorting and organizing so they can be easily accessible for those who come to the Clothes Closet.

“I really like giving back and I love that the bank decided to do this,” said Kelly Sheffield, one of the volunteers from BankOnBuffalo, who also brought her daughter. “Just have a separate day to give back to the communities.”

“It’s not just here, locally,” Tomlin said. “There’s different groups in different areas, and this is where we decided to go to.”

Tomlin showed the quote from King on the back of their shirts.

“ ‘Everybody can be great, because everyone can serve,’ ” Tomlin read. “We wanted to take what Dr. Martin Luther King said and expand on that to our employees and our teams. It’s a day when we’re not on the payroll and we can use our own time. We encourage our teams to give back to the community by just spending a little time here at the mission and helping organize them.”

Tomlin also said the value of volunteers for Community Missions can be quantified in dollars and cents.

“Every employee that works here for an hour is $20, so it’s our way of not being paid and giving back, so they can use that $20 on other programs,” she said.

Just down the hall from where the BankOnBuffalo volunteers were working, Pastor Joseph Jones of Damascus Church was mopping the floor.

“We’re volunteering for Dr. King’s birthday,” he said. “We honor God by honoring him and doing service. We all need somebody. … Whenever it (opportunities) comes, whatever we can do; we volunteer services and this morning we volunteer ourselves on an initiative that Christ died so that we could live. So, we honor him by honoring Dr. King and serving. He (Dr. King) died serving the poor. He got killed because he was a nonviolent applicant. He believed in God.”

Jones said his church had services throughout the weekend: a breakfast on Saturday and a musical on Sunday night (based on Dr. King’s life).

Meanwhile, the BankOnBuffalo team was still at it, organizing, and downstairs a few more Damascus volunteers prepared food for the group.

“It’s always good to serve, that’s what my job is as a deacon; I’m a server,” Deacon Tyrone Spencer said. “Every year we come down here. … Dr. King was a server, too. By serving we’re continuing on what he started.” 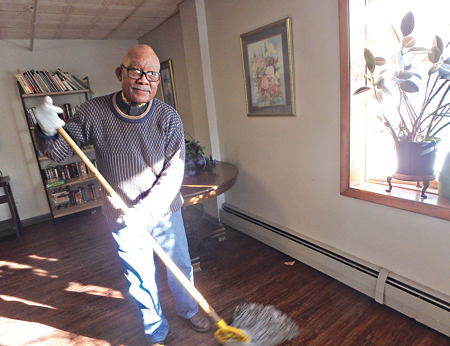 Pastor Joseph Jones of Damascus Church volunteers to serve in any capacity he can.