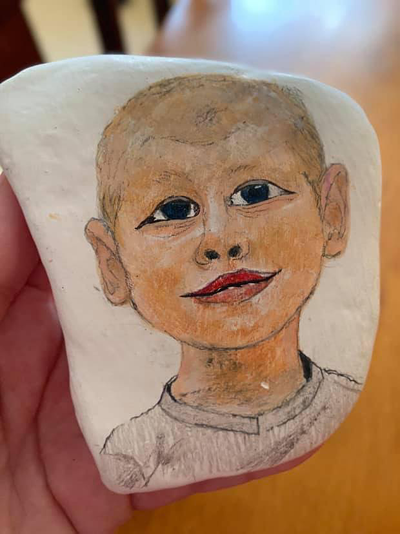 A picture of Bentley Hayden drawn on a rock by artist Glenn Scott.

The concept was simple. Find a rock, decorate it, then hide it again. Soon, someone else will find it and take a picture, then hide it, too. A fun game in cities across the U.S. hit WNY in 2017 when Kimberly LaRussa, a local blogger of a website called Sweet Buffalo, was introduced to it by a friend in Florida. She said it seemed like a fun activity for the long winter, but couldn’t have imagined what it would become.

What started out as the Facebook group that LaRussa founded for pictures of rocks – painted and hidden – Sweet Buffalo Rocks Inc. is now a 501(c)(3) nonprofit that raises funds to help children battling life-threatening illnesses.

“It took off and became something more than I ever imagined,” LaRussa said. “It’s a Facebook group that now has more than 38,000 members in it. People paint and hide rocks all over WNY, or find rocks, and it’s really cool.”

“A lot of children were finding these rocks and their parents were finding them and there were a lot of stories about these children. A lot of them were battling illness,” she continued. “The first picture I ever saw was of a little boy named Bentley Hayden and he was battling a cancer called neuroblastoma. Right away, I thought – this little boy is the most beautiful little boy – ‘What can we do to help?’ ”

LaRussa came up with the idea of painting “Bentley Rocks” and asked people who made them, or found them, to make a donation to a GoFundMe account to raise funds for Bentley and his family.

“That’s how it started, that it wasn’t just painting rocks anymore; it was helping children in need,” she said.

The drive raised more than $5,000, according to a Facebook post by LaRussa, and a benefit for Bentley was held.

“But sadly, that wouldn’t be the only time Bentley needed us,” LaRussa wrote.

Sweet Buffalo Rocks “rallied WNY to demand change” after Bentley’s insurance refused to pay for his cancer treatment. Armed with T-shirts called “Bentley’s Battle” and a new GoFundMe page to help with bills so Bentley’s family could stand by him, the group watched as the decision to deny was reversed.

For his 5th birthday this past year, LaRussa attended Bentley’s party and brought The Justice League of WNY, a group of costumed superhero friends.

Unfortunately, that was the last time LaRussa saw him.

“He very sadly passed away this year,” LaRussa said. “He was a very special friend to me. He was the first little boy we helped, and when he passed away it was really hard. All of our hearts are broken.”

While it’s not easy to lose somebody, LaRussa said, “You've got to keep going and you got to keep helping children. He is the reason that we all keep going.”

To date, Sweet Buffalo Rocks has taken on several challenges and received two grants to help. One of them was for $1,000 from The Pollination Project, an organization that makes small grants to “social change agents who seek to spread compassion in their communities,” and the other was $2,500 from the Kelly for Kids Foundation, which, since 1987, has raised $4 million to “make dreams a reality for numerous children,” according to the organizations’ Facebook pages.

“I sent them a PowerPoint that highlights everything we’ve done, which is a lot of different things,” LaRussa said. “The various initiatives that we come up with to either raise funds for kids, or have an event to bring smiles to kids. Whatever it is, we try to do it, but we always come up with different ideas throughout the year.”

Sweet Buffalo Rocks raised more than $25,000 for Bentley and his family as he battled cancer. For Anastasia Rafter, a young girl who was diagnosed with a brain tumor when she was 8 months old, the group made a “#SweetBuffaloRocks – For Anastasia” T-shirt, which was sold to bring awareness and raised $460. TJ Ackley, a young boy diagnosed with terminal cancer, was the beneficiary of the first “Rockin’ Egg Hunt” charity event, where eggs were redeemable for painted rocks. The event pulled in $2,000 for TJ.

“When a 15-year-old girl posted on social media that her family was living out of a motel, Sweet Buffalo Rocks stepped up to help. We raise $1,000 to help with their rent and fix their vehicle,” read the group’s PowerPoint. Sweet Buffalo Rocks also ran a rock painting party at Oishei Children’s Hospital, raising almost $5,000 for two children who lost their mother to leukemia through a T-shirt campaign – “Fight like a Mom,” in memory of Elizabeth Restey fundraiser – and put together the second “Rockin’ Egg Hunt” for four families with children battling life-threatening illnesses, raising $5,000.

Most recently, LaRussa and Sweet Buffalo Rocks teamed up with Kate Tolley whose father passed suddenly earlier this year.

“He always wanted to do things for others and he wanted to give back to kids on Christmas,” LaRussa said. “He said, ‘Christmas isn’t about their family, it’s about giving back to others.’ They gave up presents for each other and started adopting families, She (Tolley) wanted to continue that tradition, but got a phone call that there was a lot more families who needed help this year, so she called me and said, ‘Can Sweet Buffalo Rocks team up?’ and I said, ‘Of course!’ ”

LaRussa and Tolley approached businesses including OwnNY Real Estate, Just Pizza, Bliss Salon in North Tonawanda, who all “opened their doors.” Each child helped was given close to five presents.

“Clients and customers came in and donated toys and that’s how we were able to bring so many,” LaRussa said. “So, we’re going to do that every year, now.”

“What makes Sweet Buffalo Rocks unique is that you actually see what you gave to,” she noted. “A lot of times when you’re helping a child, you’re seeing their face, you’re reading their story, you’re getting to know them. You want to help them and you get to see what your help did for that child. I think that’s what makes it special.” 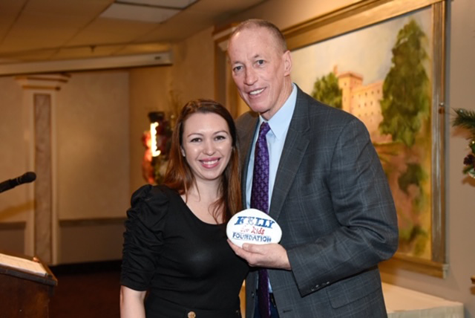