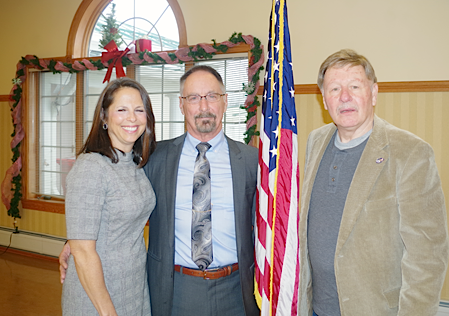 Supervisor Don MacSwan stands with his wife, Mary, and the Rev. Bob Heisner, on right, after being sworn in.

Town of Wheatfield officials thank residents as they're sworn into office

On Jan. 1, the Town of Wheatfield Community Center hosted the inauguration of the 2020 officers for Wheatfield and surrounding area in front of an audience of 50 people.

“If you don’t mind, I’d like to bring up Gil and Larry, (Councilman) Curt (Doktor) and (Councilman) Randy (Retzlaff),” MacSwan said after he’d been sworn in. “Dave, Becky, Jesse … come on up. I want to thank the residents of the Town of Wheatfield for this court that they’ve given me, and this is our team. Not just because they’re Republicans; politics aside, these guys have all done a great job and they brought me in.

“I was quite nervous as supervisor and I still am at times, but this is the team that the Town of Wheatfield residents have elected, and we have a fine team. I think highly of our County Legislators. I look around me and I’m overwhelmed with the great people that I work with on a daily basis. They’re truly my friends.”

MacSwan also said Ross was an inspiration for him growing up.

“I’ve tried to base my life on how you lived your life,” he said to Ross. “Not just in my life as a resident, but also in politics. I’ve watched you over the years and I’m proud to say, ‘Thank you so much for doing what you did today.’ ”

“This town has been successful for a good many years,” Ross said after retrieving the microphone. “As far as I’m concerned, it’s been ‘smart growth.’ The only way to have ‘smart growth’ is having a good town council. We can go back many, many years for this ‘smart growth.’ Right now, the Town of Wheatfield, of the 12 towns in Niagara County, it is the second largest. … This didn’t just happen. It happened because we have had a town council, over many years and at the present time, that instigated and motivated a lot of the good things that have happened in the town.”

“I think we all should be proud to be residents of this town. And, as I said, it doesn’t happen unless you have good leadership at the local government level,” Ross added. “Folks, that’s where it all starts at the local level. You know where Don lives, you know where Gil lives, you know where Larry lives, where Randy lives. … You can get to them face-to-face, you can get to them on the telephone or you can go to the meetings. There’s nothing like local government, because that’s where it all starts.”

Gooch shared the stage with his son, Tyler, and described playing a game of two-man-touch football with two neighborhood kids as the father and son went to each door campaigning. He held an appointed position as a legislator for Niagara County prior to November’s elections and is now an officially elected official.

“Anybody that’s been to my fundraisers, I’ve given my speeches of how I started and why I wanted to do this,” Gooch said.

He explained, “It was a very tough, long campaign. If you think about it, I got appointed in January and, one month later, my opponent made his announcement and I had to start campaigning. I’m in the legislature, I’m trying to learn the position, and I had to campaign simultaneously. That was a very tricky thing to do and try to make progress. Somehow, by the grace of God, I was able to do it, and we won. We didn’t win by just a few votes, we won by a larger margin, and we couldn’t have did it without the voters in the Town of Wheatfield.”

Legislators Godfrey and Wydysh were sworn in simultaneously.

“We’re always working hard as a team,” Wydysh said after being sworn in. “We’re very lucky to have Jesse with us now. Dave has been around for a while. And I’m looking forward to my role as chairman.”

“I am honored to be here again,” Godfrey said. “This community is a very strong and important part of our government … because we care.” 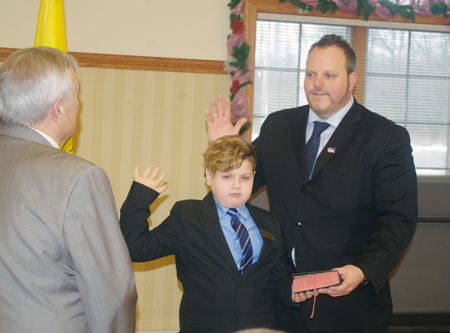 Jesse Gooch is sworn in as Niagara County legislator alongside his son, Tyler. 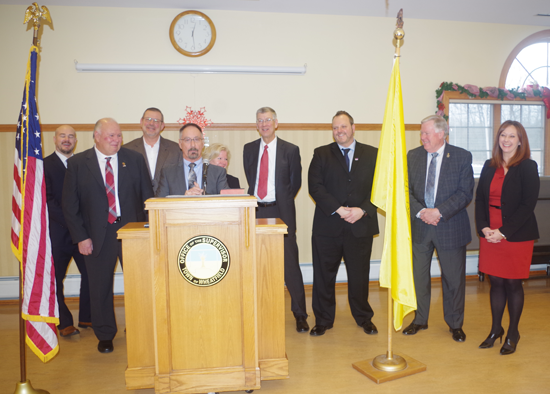 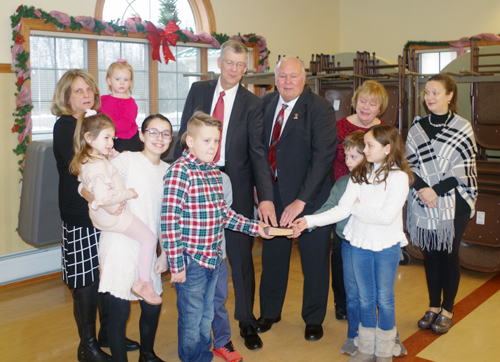 Former Legislator Bill Ross swore in Larry Helwig and Doucet – shown surrounded by their families in this photo.