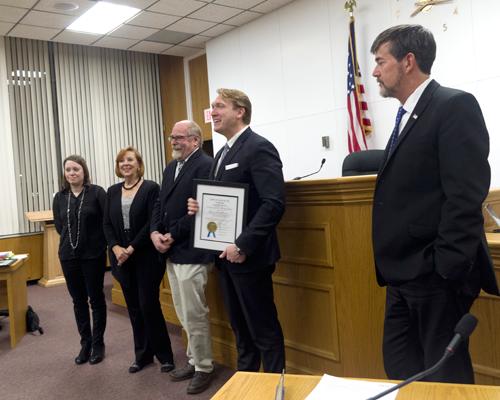 Town Supervisor Nathan McMurray speaks after receiving a certificate from the Town Board during the last meeting of 2019. McMurray, Councilwoman Bev Kinney and Deputy Supervisor Jim Sharpe were taking part in their last regular Town Board meeting before leaving office. (Photo by Larry Austin)

A proposed town tree ordinance is going back to committee following another public hearing before the Grand Island Town Board Monday.

Though Town Supervisor Nathan McMurray promised supporters of a law that the board would vote yea or nay on a proposal before his term as supervisor ended, the board sent the matter back to the Planning Board for further discussion once it became clear to all that there still was no consensus on a law.

During the public hearing on the law, Ed Standora said the Town of Grand Island is “two decades behind other towns” in passing a tree law. Noting the emerald ash borer that is killing ash trees, Standora said “nature is working against us” and he asked the board to move a law now so the town could qualify for a Tree City USA designation (from The Arbor Day Foundation) that would make the town eligible for grant money.

Members of town advisory boards other than the Conservation Advisory Board were nearly unanimous in their opposition to the proposed law. Councilman-elect Tom Digati, a Parks and Recreation Advisory Board member, said that the proposed tree law “does not plant trees” and that it is “not the answer” to deforestation. He asked the board to consider “the input from all the other interested parties and let’s put together a law that makes sense for our community.” Kristen Cascio said input from other town advisory boards was “ignored” and “what this town really needs ... is a comprehensive forestry management plan.” Dave Bruno, chairman of the Planning Board, called three drafts of the law versions A, B and C, and pointed out version A was voted down 7-0 by the Planning Board, and versions B and C never came before his board.

Several opponents noted the law does not prevent clear-cutting of trees, which was the impetus for a law after Benderson Development clear-cut a stand of trees next to Tops on Grand Island Boulevard eight years ago.

Among those criticizing the proposed law was Elizabeth Holmes, an attorney for Barclay Damon, which describes itself as a “super-regional law firm” on its website. She said on behalf of a client that the law was “clearly targeted toward developers.”

Councilwoman Bev Kinney said developers “weren’t made stakeholders” in the crafting of the law, and she was told by proponents of the law that “We don’t need to talk to them. They’re the problem.”

“Well, they’re citizens and they need to be talked to, too,” Kinney said.

Tom Green, chairman of CAB, said the law puts a permit process in place for mitigation measures. Currently, the Island has no way to track deforestation, he said, and the law “encourages responsible development.”

“What we stand to lose we can never get back,” he said.