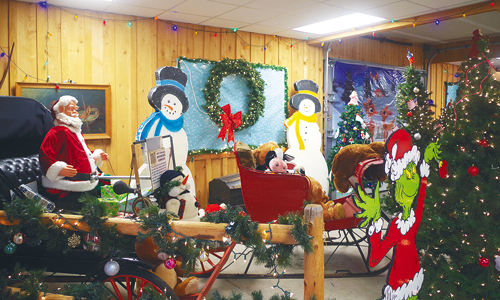 'Christmas at the Farm' is family fun

For family fun with the kids this winter, there’s a place at 2660 Saunders Settlement Road called the Sanborn Farm Museum. It’s becoming the site of “Christmas at the Farm” for two days in the middle of the holiday season: 11 a.m. to 4 p.m. Saturday and Sunday, Dec. 14 and 15.

Sponsored by KeyBank and the Niagara Falls Bridge Commission and put together by the Sanborn Historical Society and the Sanborn Business Association, as well as the Town of Lewiston, who lends a financial hand – it’s an event the kids come to and are completely entertained.

Organizers call it “fun for the whole family!” They remind parents to bring a camera for the meet-and-greet with Santa.

“It’s our kid’s Christmas program for the community,” said Bonnie Haskell, representing the Farm Museum and inviting families from the Lewiston and Niagara-Wheatfield area for the free event. “We’ll start off the day at 11 a.m., and the kitchen opens at 11:30 a.m. for lunch, which is available for purchase. Then at noon there will be the arrival of Santa. Santa will be here between noon and 3 p.m.”

But that’s not all.

“We have some special guests for the kids,” Haskell said. “(But) it’s a secret. … (Laughs)

“Actually, we’re going to have the characters from ‘Frozen,’ in costume. So, we’ll have Olaf, Anna, Elsa and Kristoff.”

Other activities the kids can get involved in – with parents onlooking the fun – are some simple craft projects.

“They do a pine cone project,” Haskell said. “The kids love that. They take a pinecone, they roll it up in peanut butter, and then in birdseed, and then they hang it on the tree. We put it in a bag for them to take home.

“Those who can’t have peanut butter, they can roll it in glue and glitter to put on their Christmas tree.”

Another project included is frosting a cookie. Each kid gets a cookie, Haskell said, and they can frost themselves.

“Most of the time the cookie never makes it home; they eat it here,” she said. “We have little bags for them if they want to take it home. Most of them sit right there and eat it.”

Santa Claus, however, remains the centerpiece of all this holiday fun. According to Haskell, he’s really quite a guy.

“Our Santa Claus is just wonderful. He is the greatest. He takes time and patience with the kids, he sings ‘Jingle Bells’ and has the kids jingle bells (during the chorus),” she said. “He doesn’t rush. He takes his time and if one of the kids doesn’t want to get in the sleigh, that’s OK. He’ll talk to them standing in front of it.”

“What the parents like is when their kid gets up in the sleigh,” Haskell said. “We always tell them to take a picture. It’s like a Hallmark Christmas card.”

“The kids get in the sleigh with Santa and they tell Santa what they want for Christmas,” she explained. “Then Santa’s elf will ask them how old they are. After that, our elf goes over to the present pile, picks one up for their age group, walks it over to Mrs. Claus. Mrs. Claus grabs it and hands it to Santa.

The sleigh itself is an authentic piece of olden-time transportation from the 1800s, so this makes any photo-ops special, Haskell said. In the background of the pictures are vintage Santas, snowmen and eight Christmas trees, including a Grinch Christmas Tree and a Rudolph the Red-Nosed Reindeer tree.

Haskell explained a lot of these decorations were bought years ago from a customs shop, which was going out of business. After being invited to see if there was anything they’d like, the Sanborn Business Association bought up $4,000 worth of items for the community.

Haskell said it was a good investment.

“We also have a memorial tree,” she said. “For those that we have lost.”

Haskell went on to describe what the kids will see as soon as they enter into the festivities.

“It is a blast, it truly is,” she said. “The kids come in through the center from the doors. They walk down the center – we have it all gated off – and they stand in line and wait for Santa to get there. They start coming in at 11 a.m. and wait! It is a riot, it really is. It’s just a fun two days.“

“You got to love kids for this, because when they get their presents, they are screaming and yelling and that’s OK,” Haskell continued. “We’ve never had a problem with any kid. We also give hot chocolate to the kids and there’s no cost to that, and cookies. And the parents can have a coffee and cookies, too.”

The event began out of the late Linda Jackson’s imagination, while she was curator of the Farm Museum years ago, Haskell said.

“Her and I are the ones that developed this whole program,” Haskell said. “We knew the minute that we built the hall that we wanted to do something like this for the community. That’s when we started working on the program and, within six months, we had it up and running and it’s been going ever since.”

“We usually plan on about 250 kids, that’s what we usually see, and that’s just kids, not parents. … To me, it’s a unique community celebration of Christmas for kids,” she said. “We really do love it; it’s our best time of year.”