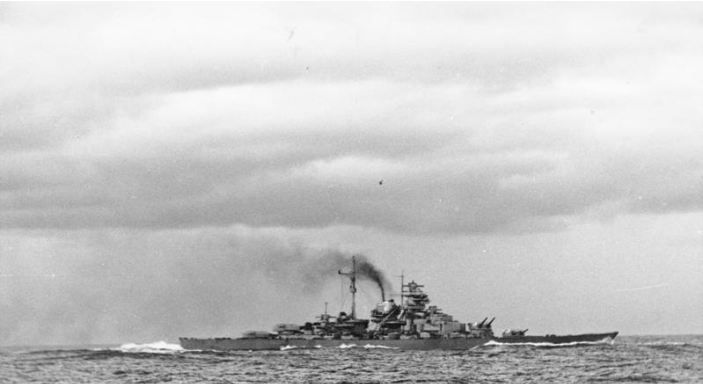 The Bismarck is seen in 1941 from the side of the German heavy cruiser, Prinz Eugen. (Photo credit: German Federal Archives)

On the frontlines of World War II

“They sowed the wind, and now they are going to reap the whirlwind.”

The battles of Denmark Strait and the chase of the German battleship, Bismarck, as well as her heavy-escort, Prinz Eugen, captivated Great Britain and the Allies to go on one of the largest search missions in the world at the time. The sinking of the Bismarck limited the Kriegsmarine’s (German Navy) power when it came to surface warships on English merchant ships operating in the North Atlantic and the Bering Sea. The remaining German surface ships then only conducted raids near the coastlines due to protect of the Luftwaffe (German Air Force during WWII). Hitler decided Germany would focus on submarine warfare after the sinking of the Bismarck.

Sailors from the Kriegsmarine as well as the Royal Navy are respected and will forever be at peace.

This article is by no means a first-hand account of what happened – rather the author’s interpretation of the real-life events that took place in the spring of 1941. The author has always been captivated by his grandfather’s naval stories from being a submariner in the war. He did not participate in the North Atlantic theater, rather the Pacific theater near Brisbane, Australia.

There was an eerie feeling of knowing certain death was lingering above them. However, this was not the time to think of the inevitable. The swaying of the ship made more than 100 different seamen from all over the vessel sick; in addition, there was no space and limited food to add to the misery.

Every hour, every minute, every second, they were all hands on deck prepping for the next defense. The men on the anti-aircraft batteries were glued to their telescopes, trying to spot the incoming reconnaissance planes. A lone battleship with all hands on deck was no match for a lightweight recon plane high in the sky, searching for them.

The Kriegsmarine were about to lose their flagship – just like how the British lost theirs a few days before (H.M.S. Hood).

The 49,500-ton ship bobbed in the North Atlantic similar to a rubber ducky in a child’s bathtub. The salty seawater flowed over the bow of the ship in the same fashion over and over again. This was expected of an ocean-going vessel, but there was one catch. The rudder and boiler room were hit by an aerial torpedo, creating a hole in the hull of the ship. Water was trying to sneak its way in by any means necessary. The Bismarck was a state-of-the-art battleship, but the damage that was done needed major repairs. The admiral in charge, Günther Lütjens, had to make the hard choice of plotting the route back to the nearest, largest drydock located hundreds of miles away in Saint-Nazaire, France.

The doomed ship sailed as fast as her crippled engines could provide. Unbeknownst to the German crew, the English did not have any traces of her and were in a panic searching frantically for the large warship. Prime Minister Winston Churchill ordered the famous quote, “Sink the Bismarck!” After nearly 24 hours had past, a lone British operated PBY Catalina spotted the ship about 400 miles off the coast of France in the Denmark Straight. This was the beginning of the end for this heavyweight battleship.

The German anti-aircraft guns were the first to open fire. Tracers and bullets of all calibers were shot trying to hit the reconnaissance plane before the crew of the aircraft could get away. The cover of the clouds and sharp turning of the plane led to the tactical retreat of the plane. Bullet holes were not an issue to the sturdy frame of the American-built aircraft, so the plane just followed the doomed ships until more recon planes as well as surface ships could catch up. The Bismarck and her crew had no choice but to carry on toward France.

More than a week had passed since the sinking of the H.M.S. Hood, and now it was time for the Bismarck to meet her fate. The British deployed carrier-based aircraft, Fairey Swordfish, to hit the German ship again. The old biplane squadron was up to the challenge and was sent off at a meagering 95-knot pace. That speed was slow for even back then, but would it prove effective?

It was a clear Monday afternoon when the sound of heavy gunfire destroyed the peaceful silence. Tracer rounds, shot off in hundreds at a time, made the Fourth of July fireworks look like child’s play. The ship gunfire was so intense that the smoke made the ship look like it was on fire. The whistling and screaming sounds the shells made were deafening to the enemy, as well as the ship’s own crew. The British Swordfish carried on still; the saving grace of the biplanes was that, because of their speed, the projectiles could not comprehend the slowness of the planes. The gunfire was made to prevent the bigger and stronger planes that moved three times as fast compared to these old biplanes. The projectiles did not explode in time to stop the aircraft, which, in turn, made the aircraft almost invulnerable to the German shells.

After countless number of rounds past each of the Swordfish, the Royal Air Force pilots dropped their payload – a single aerial torpedo. Almost all missed except for one. The lone torpedo hit the aft of the ship, sending thousands of gallons of seawater up into the air. No fires, nor any flooding on the ship were spotted on the Bismarck, so the quick raid was thought as useless. However, that was not the case.

The slow, out-of-touch biplanes had the final crippling blow to the Bismarck. That one lone torpedo managed to knock out the rear rudder of the ship, which created a disastrous effect for the ship. Because of the jammed rudder, the steering forced the Germans to turn away from the friendly French waters and into the incoming British fleet. By the next day, surface ships were close enough to start trading volleys with one another.

The day was Tuesday, May 27, 1941. Every British gun in a 50-mile radius was aimed at the Bismarck. The ship’s fate was sealed.

The red sirens of incoming shell warnings lit up the immovable German ship. The distance “booms” of the shells echoed through the clear ocean air. The air itself was tense and felt heavy to everybody. The battle was just beginning, yet the crews of all the ships were sweating profusely, because of the tension. The first few salvos fired from the Royal Navy battleships landed near the ship, but were far enough away that was no damage. Whichever side had the better aiming systems was going to be the clear victor.

The German valley also missed, so both sides started creeping fire on one another. The shells got closer and closer to each other’s hulls, but then contact was made. The H.M.S. Rodney (battleship) was the first ship to get a major hit. One of its 16-pound shells made a direct hit on the Bismarck’s lead turret, knocking it out. Yet, the havoc of the battle ensued. By this point, British cruisers, destroyers and battleships opened up all possible arterially toward the doomed ship.

British sailor George Bell, stationed on the light cruiser H.M.S Dorsetshire, stated that, “It was then found that the Bismarck was stopped, completely stopped, and she was on fire from stem to stern.”

In less than 15 minutes, the German flagship was utterly helpless and did not have the capability of shooting off another round. The British cruiser then launched three torpedoes into the side of the German ship, finally sealing her fate.

Out of the nearly 2,000 German sailors who were stationed on the ship, only about 100 sailors survived the inferno.

The downfall of the Bismarck was the downfall of the surface ships of the Kriegsmarine. The chase of the Bismarck and the destruction of the H.M.S. Hood changed the outlook of the war, as well as how Germany took part in Atlantic sea operations. All of the pocket battleships and raiding ships were kept out of busy waters, because the majority of them were stuck in port or sunk. German submarines took over the raiding of allied vessels and doing search parties. The brave sailors on both sides fought with valor for their countries until the very end.