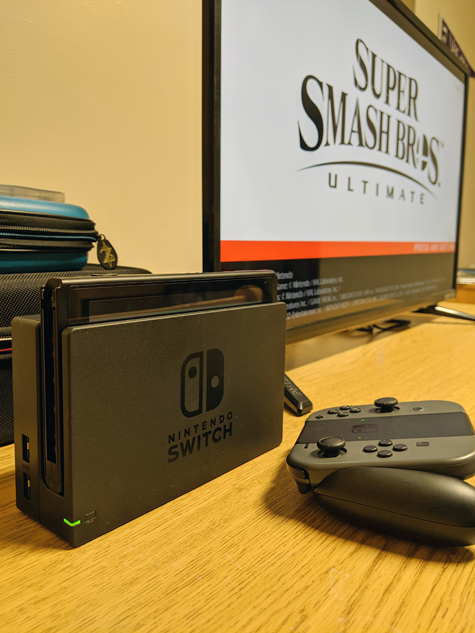 Nintendo's Super Smash Bros. Ultimate has become a staple in competitive esports since its launch last December and is one of the major games played by members of NU Esports.

There’s 30 seconds left on the clock. Everyone watching in the small crowd that has gathered is extremely tense. The two opponents – one a middle-aged plumber wearing a red cap and overalls, the other a tall knight equipped with a sword, a bow and other weapons – dance back and forth on the stage, trying to find an opening in their opponent’s defenses. One strong hit from either combatant could end the match.

Suddenly, the plumber dashes up to his foe, landing a fiery punch that sends the knight flying off the stage. He cries out in pain as he flies dangerously close to the “KO” line, but he lives.

The onlooking crowd gasps as the plumber follows the hero offstage, looking to land his final blow. But the hero, being the cunning cavalier that he is, quickly whips out his blade and angles it downward. It connects with the plumber, spiking him straight down off the stage.

“Game!” calls out the announcer in a deep, commanding tone. The crowd exclaims loudly, some in jubilation, and others in disgust, as the commentator declares the victor: “The winner is … Link!”

This may sound like a twisted fighting event in a science-fiction movie, but it’s a real sport – sort of. This is Super Smash Brothers, a fighting video game where legendary game characters (like Link, from The Legend of Zelda, and Mario, from his titular series) brawl one another in a battle for supremacy. It’s just one of the many games the students of Niagara University’s Esports team play on a regular basis.

NU Esports is the newest club sport to hit the university’s scene, with members playing against both local and nationwide schools in a variety of video games, vying for trophies, titles and other incentives.

“We began as a grass-roots type of student club last year with only a dozen or so members, who all have been working hard at building it up into what it is today,” said Kit Straub, a founding member of the club and one of its administrators.

Now, NU Esports is an officially recognized club sport at the school with 40 members. These members are divided up into smaller teams that play specific games, including: 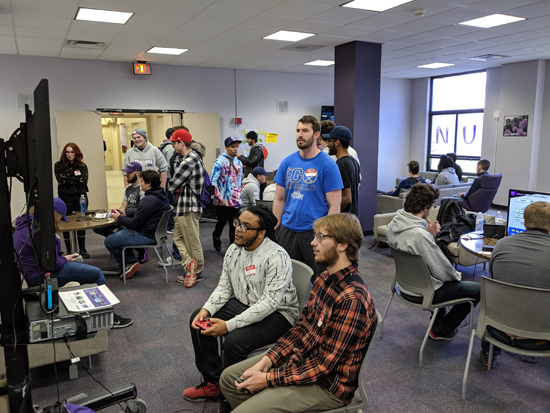 Despite the differing tastes in games, the members of the team are supportive of one another in their respective games and events. This includes watching one another’s weekly “streams” on the online service Twitch, and heading to each sub-team’s personal events and fundraisers on campus.

“It’s a good place to meet and find people that are passionate about the same games as you,” said Spencer Vadnais, one of the team’s Overwatch players. “I know that I’ve made a lot of new friends in esports and, without esports, I probably never would have even met them.”

NU Esports – along with college esports in general – has become more than just a fun pastime for players, though. The competitive nature and rulesets of computer and console gaming is quickly gaining momentum on college campuses across the U.S., with some offering scholarships to the best of the best. As of this article, there are more than 150 different institutions nationwide that have officially recognized programs – and Niagara University is one of them.

Like any good sports team, Niagara’s esports players hold regular practices amongst their sub-groups, in order to ensure that everyone is making steps in the right direction. Though the nature of the club itself is competitive, teammates assist one another by reviewing matches and pointing out flaws in gameplay, opening the door to new strategies and overall improvement.

Many of these practices are streamed on Twitch on a regular basis, so that other members of the team (as well as anyone else that may be interested) can watch, comment, and support the organization.

Niagara has been competing in the Electronic Gaming Federation’s (EGF) third national collegiate preseason tournament, which began on Nov. 18. The competition is hosting a few Metro Atlantic Athletics Conference (MAAC) schools, including Saint Peter’s University, Siena College, the Rochester Institute of Technology, and Canisius College. These schools are competing amongst Niagara and one another in four weeks of matches that will determine the seeding at the EGF Collegiate Founders Invitational on Jan. 25-26.

The EGF league may end up being connected to several large media outlets working on a nationwide and even global scale.

“This isn’t just a small-town thing,” said Bryce Molnar, president of NU Esports. “This is a professional league, where we’re playing with some big names watching us, in a league that could possibly be associated with ESPN.”

“We are very grateful for the momentum and support that we’ve earned so far and look forward to competing in the MAAC and EGF league next semester alongside other top-tier programs throughout the nation,” Straub said. “This is an up-and-coming multimillion-dollar industry that has no signs of slowing down, and we’re pleased to be at the forefront of the wave with a solid foundation and great growth potential.”

All the team’s major sub-teams are competing in this year’s EGF league except for Overwatch, which is expected to be added starting next semester. Other games are being considered, as well. 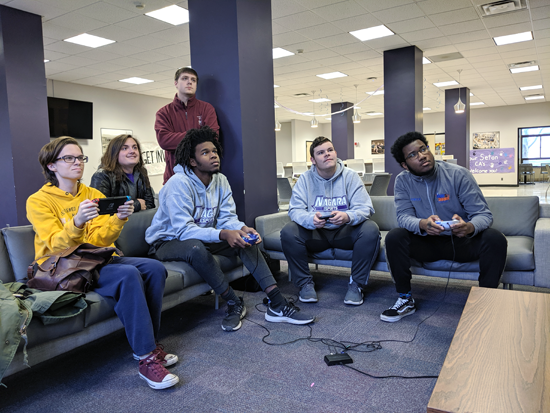 NU Esports’ Smash Brothers team meets several times a week to play against one another while learning and trying out new techniques.

The Niagara team is always looking for new members. Events are open to the public so that everyone can enjoy them, whether they attend NU or not. The squad’s first event, held back in February, was a tournament centered on the popular sports title NHL ’19. The competition even featured a visit from Sabretooth, mascot of the local Buffalo Sabres hockey team.

This past Saturday, NU Esports hosted a Super Smash Brothers tourney, where students and locals got together to play the game in hopes of taking home a gift card or an “Amiibo” – a figurine designed to be used with the Nintendo Switch and other Nintendo consoles.

The team plans to continue making strides toward becoming a recognizable icon both at the university and in the regional competitive area.

With esports on the rise across America, and more schools taking part, Niagara may already be a part of the next college craze. The growing possibility of expansion is the glue that keeps the team together. After all, if players are going to be a force to reckoned with tomorrow, there are matches to play today.