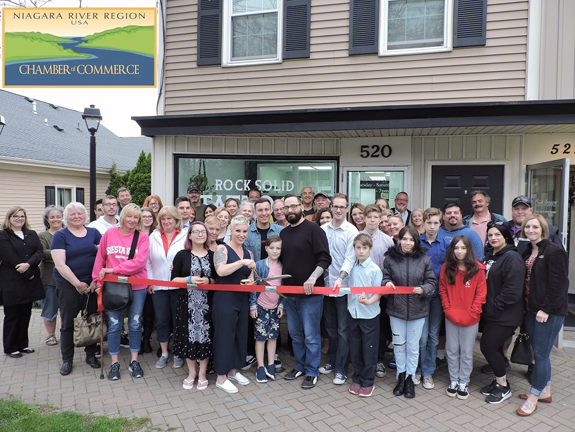 The Niagara River Region Chamber of Commerce hosted a ribbon-cutting ceremony on May 20 for David and Christina MacKenzie, owners of Rock Solid Tattoos and Permanent Makeup Studio.

Sure, there’s a nobility in shopping local and supporting your neighborhood merchants. Certainly, community and camaraderie can be found when patronizing a local restaurant, picking out gifts at the corner store, or participating in a themed event like the recent Trick-or-Treat Center Street.

In truth, we could sit here and espouse the philosophical benefits of next weekend’s Small Business Saturday – of skipping the national retailers and online marketplaces.

But it’s the holidays.

And someone’s got to put gifts under that tree (after they’re, gulp, wrapped, of course).

Sure, nobility is great. And championing hometown sellers – who wouldn’t want to do that?

Here’s the thing, however: Christmas is only a month away!

You may hear “shop small,” but, if we’re being honest, you’re really thinking QVC – not necessarily the famous TV sell-a-thon, but what it stands for: quality, value, convenience.

Thanks to the ad wizards, you may think QVC is only found on your digital devices or inside a Walmart or Target.

What if we told you that, if you really want quality, value and convenience – and not just cheap and easy – you won’t find it online, on the boulevard, or on channel 159.

QVC is right down the road – on Center Street.

•These high-end goods are sold for a reasonable price because, contrary to public belief, not everyone in the 14092 has deep pockets. On Small Business Saturday, many of these items are further discounted.

•Convenience comes, yes, in that the shopping district is walking distance away, but even more so when you can readily find the right gifts. Lewiston storeowners build a bond with customers. Oftentimes, they’ve picked out merchandise and have it on hand prior to a patron’s arrival. They’re on site to give feedback and make sure a dress is the right fit or a charm necklace has the proper settings. This results in fewer trips to return items (which, like fruitcake, is the holiday gift no one ever wants).

So, you could shop online next weekend, or visit a chain store, but here’s the thing: When you click “Add to cart,” your order won’t come with Sara Morreale.

And it’s highly unlikely you’ll find the guidance of Laura Mann Falsetti, Cheri Clark or the MacKenzies in aisle 4 of the box store.

Simply put: You won’t find their expertise anywhere else. Certainly not on a message board or from a robot responder.

These business owners are uniquely qualified to help you find affordable, unique gifts destined to be cherished for years to come. 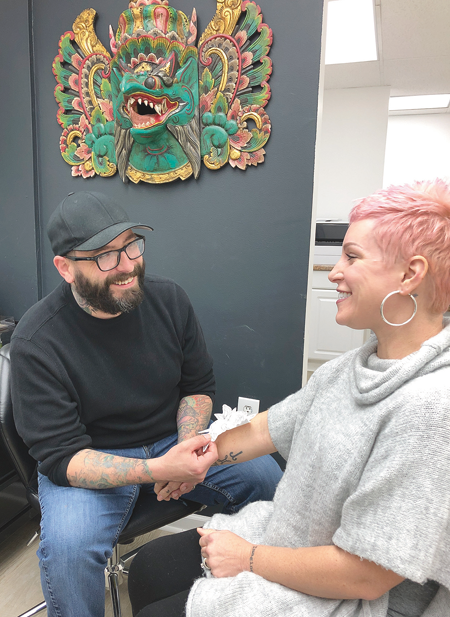 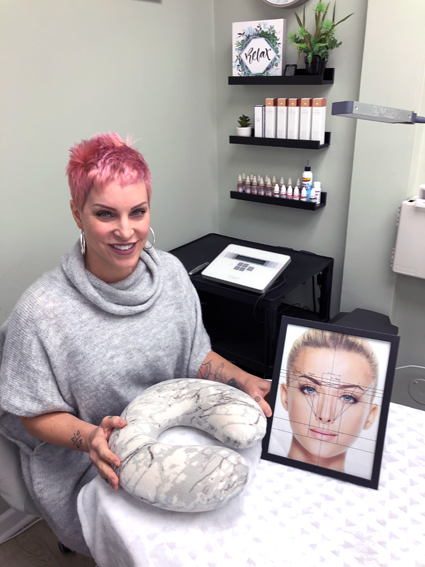 When Lewiston residents learned a tattoo studio would open on Center Street, there’s no doubt some imagined, well, something akin to a fictionalized biker bar.

Dark, smoky; perhaps a shady game of pool in the corner?

“Or like a teenage boy’s bedroom,” co-owner Christina MacKenzie said. “Yup; no.”

“That’s all me!” she said of the 6-month-old business she shares with her husband, David MacKenzie.

“This is me wanting to be something completely different. I wanted – if we’re going to open up somewhere – especially since both our business is together – my business is a little bit different than his; I have obviously more ladies – and that was my concept. If we’re gonna be in Lewiston, it needs to be high-class, amazing, clean, something to set you apart from all the other tons of tattoo shops around the place.

“So, no, most tattoo shops do not look like this.”

Nor, necessarily, do they all ascribe to the MacKenzies’ desire to make customers feel at ease.

“I think what it comes down to is us. We sell ourselves,” she said. “You go somewhere where you feel comfortable. My hugest thing is, when people come in, I want them to feel automatically comfortable, appreciated, and excited – and excited when they leave.”

“We couldn’t do it without them,” Davie Mac said.

“No,” Christina affirmed. “And I feel like a lot of other tattoo shops, growing up being tattooed, like all time, are very intimidating. You walk in, you feel like you’re intimidated.

“I think that’s the thing. We try really hard to make it super-friendly and comfortable. That’s our big deal.”

Part of feeling at home is trusting in the purveyor of services. Here again, this is something the MacKenzies specialize in.

“I would say, first of all, just the fact that he’s been tattooing over 20 years,” Christina said. “When we first opened our shop a long time ago, there was not barely any tattoo shops. There was like one or two in Niagara Falls. Now it’s inundated. There’s a ton of shops around, and there’s a lot of new artists. So, I think the fact that he’s been in it like 20-something years, he brings all that experience and everything with it.

Davie Mac began working in tattoo shops when he was 16.

“The first shop I ever worked at was called Way Cool, and the guy who owned it was awesome. He helped set the standards in Ontario with the health department. So, it was a really great place to learn what needs to be done to run a clean shop,” he said.

“It was a busy shop, too,” Christina noted.

“It was very busy. Charlie held the record; I think he did about 18 tattoos in one day there, mid-summer,” he said.

“It was right off Clinton Hill in Canada,” she added. “They were just crazy busy.

“That was great. It was a good place to learn. They had tons of good artists coming through there all the time. Picking people’s brains; very harsh critiques, occasionally. And just sticking at it,” he said. “Then, beyond that, taking classes. There’s actually another tattoo piercing studio in Buffalo that helped organize all the tattoo studios in the area. They started bringing everybody together and having bloodborne pathogens training, which was great, because it’s lacking in this area.

“That was the big stuff. Just working with tons of people throughout the years, learning as much as I can with everybody.”

Christina is a certified esthetician and tattoo artist with advanced schooling in makeup and lash work. She offers an uncommon cosmetic option.

“Permanent makeup is literally just tattooing makeup,” she said. “So, it’s a tattoo machine. It’s a lot quieter; it’s a quieter, gentler machine. But it’s the same technique of implanting color into the skin. I tattoo brows. There’s a couple different kinds of brows. You can do hair stroke brows or powder brows. And I tattoo upper and lower liner – like eyeliner – and then we do lips.

“That’s what I’m doing now, because that’s what I went to school for. But eventually, once I get all this down and become amazing at it, you can do even more.”

The MacKenzies formerly operated out of a store on Military Road in Niagara Falls. They live in Lewiston and, when an opportunity arose to join the village’s small business community, they were ready.

“They do so much for the businesses down here,” he said. “Like, you really can’t even describe how amazing. They put on all the festivals; they have concerts down at Artpark. The community really helps the small businesses on Center Street succeed.”

“We were a little nervous though,” she noted. “We worried how they would take it.

“I think one of the biggest reasons is we lived here. We raised our kids here; and we love it – we love everything. So, it was like what we talked about for a couple years – like, ‘Wouldn’t it be amazing if we have a shop here – in our community?’ But then we were a little like, ‘I wonder how people will take it?’ ”

After some initial community curiosity, “People met us and realized we’re people who raised our kids here – we’re not some crazy people. …

“A little bit,” she replied. “We can’t believe (it). People have been really good about it, like as far as people asking for collaboration and stuff going on all the time.

“And Lewiston is known for being an art community. That’s one of the reasons we both moved here. We’re both artists, and it was like – besides the good schools – we love the fact that there’s an art community; it’s close; everything’s going on all the time.”