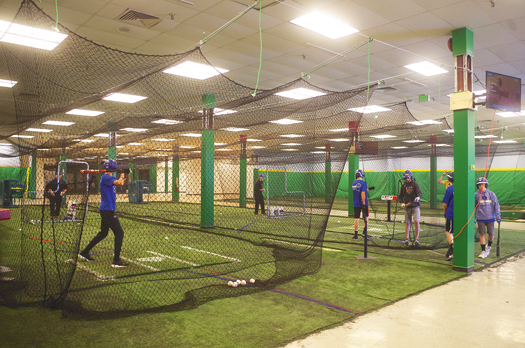 Players use the batting cages in the old Sears building of the Summit Mall in Wheatfield.

From the outside, the Summit Mall in the Town of Wheatfield looks completely deserted. But once inside, and with a little imagination, it’s hard to not see the vision of what this place could be.

Recently, the building hosted a concert in which 800 people showed up. Now, the batting cages are open for use, as soon as school lets out, and all weekend from 8 a.m. to 10 p.m.

“We opened up for the first time last weekend,” said Neil Turvey of Niagara International Sports & Entertainment. “We had eight teams in just to get a feel of how everything is working. We wanted to make sure the machines were working right. The gym should be open by the end of the month, and the game room will be open that first week of December.”

The old Sears building has been stripped of its displays and aisles of products and, in their place, are several batting cages, a concert stage, and a few empty rooms to become a game-room, basketball and volleyball courts, along with space for a pizzeria or sporting good store. There’s also a restaurant/brewery in the works, Turvey noted.

Turvey said he first met Canadian developer, Zoran Cocov after he bought the building. Turvey was in the midst of starting the Junior Thunderwolves program at NCCC. Hearing that Cocov was thinking of creating a sports center out of the old retail space, Turvey contacted him in hopes of finding a home for his teams.

“We sat down a couple times and, eventually, after five or six meetings, he asked me if I was interested in being involved with the project to spearhead the sports part of it,” Turvey said.

“(Then) Bon Ton and Sears moved out. They were the final pieces (to leave before development). They didn’t fit what was going on, because he (Cocov) wants us to be more sports and entertainment. He wants us to be more activity-based. It’s not a retail location.”

But what to do with all that space?

“We’re going to have an event space set up so they can do craft shows and sports memorabilia shows. It’s going to have some convention space and a sports bar and brewery,” Turvey said. “There’s going to be volleyball courts out front in the parking lot, and the fieldhouses in the back. We’re going to hold huge trade shows. We have 2,000 square feet.”

Turvey said that one of the reasons it has taken so long for plans to be implemented was Sears.

“Sears was part of the problem, because they had written into their contract that they had to approve all construction on site,” he said. “With the corporation being such a mess, it caused some issues for us; it slowed everything down. We finally got approval last week from the (Wheatfield) Planning Board.”

For months prior, the project was completely silent in terms of advertisement or promotion. Turvey said the reason for this was he “didn’t want to disappoint anybody.”

“We want to give them information when something’s going on,” he said. “We got all the clubs, all the organizations, Nation’s Baseball, all the big organizations know what’s going on. We’ve kept them abreast on the timetable.

“And this isn’t the final plan, this is just until the fieldhouses go up and the batting cages move behind where the sport’s bar is. We’re going to be in a better position over there.”

Turvey took the Tribune through the deserted building, pointing out where different companies could come in and fill up the space. In many ways, it’s still resembles a mall, but it’s now focused on sports and activities.

“We want to set it up so the kids can come in and they can hang out,” Turvey said. “Something other than go back home and get on the video games.”

He led the way to the old garages where Chris Harris, the man behind the concert earlier last month, was working on cleaning the space as a contractor – his day job.

“That’s what I do,” he said when asked how he pulled off a concert in the building. “I got a hundred promoters, and I’m also an international artist manager, so that helps us out too. I say I’m doing something. … I’ve got a social media of 10,000, so they follow me.

“It was a good time for everybody.”

Harris also said they’d do it again on Dec. 6 and New Year’s. He said the best way to stay updated was to follow him @starrecords456 on Instagram.

As to how he got involved with Turvey, he said he was just driving by, saw the sign where Sears used to be, and called up the number.

Before the plans will come to full fruition, a lot of work has to be done. The area Harris is working on is one of the gymnasiums, which has to be totally cleared, flooring needs to be put down and markings added for basketball, volleyball, soccer and baseball.

“It’s going to be a full sports court,” Turvey said. “Then we got a portable turf system that we roll in and out when the field sports are in.”

The full plans for the Summit Mall are now in front of the town engineer, Turvey said, and the project has been approved by the Planning Board in the Town of Wheatfield.

“If someone is coming in to play a soccer tournament in February, we want them to be able to go and grab pizza for lunch.”