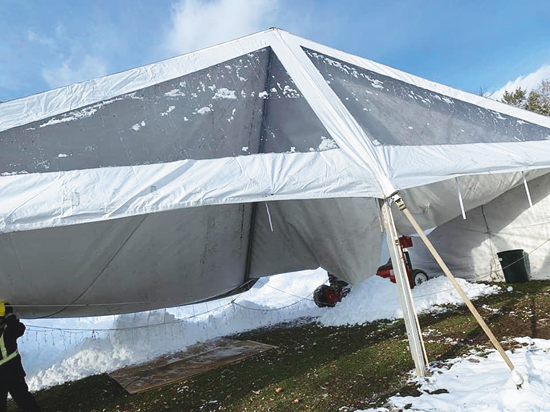 Shown is damage to the Lewiston Family Ice Rink warming tent resulting from Monday's snowstorm. The tent's status for opening day is in questions, and community assistance is sought. (Photos courtesy of Tom Deal)

So, what is going on with the Lewiston Family Ice Rink?

As most residents have likely heard, the 2019 holiday skating season for the Town of Lewiston Family Ice Rink was expected to begin at 4 p.m. Friday, Nov. 22.

Up to this past Monday, work had been moving ahead on the many elements involved in making the Lewiston Family Ice Rink a reality in the River Region for the upcoming holidays. Then winter weather hit, marked by a nearly 8-inch snowstorm, high winds and frigid temperatures this past week.

It did a number on the warming tent complex that’s an integral part of the ice rink.

Lewiston businessman Tom Deal of Deal Realty, who works with the Town of Lewiston on various sponsorship initiatives associated with the Family Ice Rink’s annual operations, said the Recreation Department is considering its options with respect to the warming tent complex damage.

The town leases the large tent complex, complete with flooring and lighting equipment from Brett’s Awning and Tent of Niagara Falls. The town owns much of the actual ice rink equipment – the floor, boards, glass – but leases the tent and its inside elements, plus the outside chiller units used for the ice rink surface from outside sources.

“It looks like we are going to try and save the rink,” Deal said Thursday. “The tent guy (Brett’s) is looking at everything today to get a quote to fix it. A second option would be to rent a replacement for the year. He has a couple of different options we could use.”

Deal said Brett’s Awning is working with Rec Department to determine the next step. “He’s working with the town, looking at the damage, his inventory, what the town has, what they would have to fix.”

He noted the town would also contact its insurance carrier on any related damage claims for the rink.

So, what of the rink for the upcoming holidays?

“Either way we are going to be work hard to try to be open by the regular date,” Deal said.

He noted the Recreation Department is aiming for the Nov. 22 opener, but that may not happen due to parts for the tent complex that would have be ordered.

“As of this point, we’re still shooting for the 22nd; (but) I’m hearing that some of the parts we’ll need won’t be ready. There may be a delay, but we’re going to try,” Deal said. “Once we get that number on the exact damages, we’ll have a better idea of what we have to do. They (the town) will have a better number.” 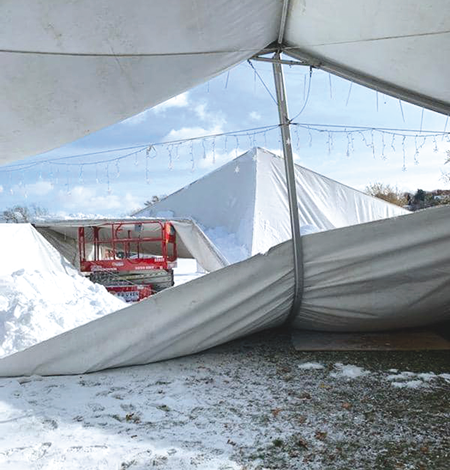 Then there’s the issue of having the actual labor available for assembling. The rink itself is typically put together using Recreation Department staff along with some Highway Department personnel (when possible).

“The rink is a massive undertaking, as we transform Academy Park into winter wonderland,” Town of Lewiston Parks/Recreation Director Michael Dashineau said.

“Mike and his staff are trying to do this themselves,” he said. “Mike’s people are concentrating on the rink itself; Brett will be dealing with the repairs.

“But it appears they may need some outside help financially, and with physical labor.”

Deal said those in the River Region who may be interested in assisting on the various sponsorship endeavors under consideration for the holiday season, or interested in helping with labor, are welcome to contact him via email at [email protected].