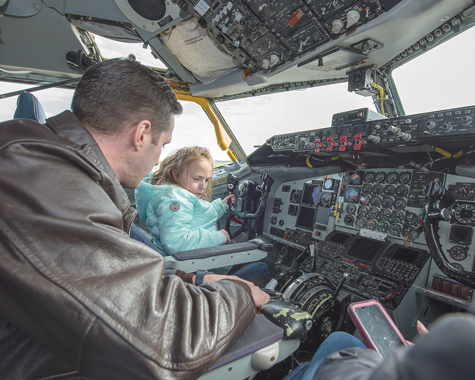 'Airman for a Day' puts spotlight on Tianna

A special guest visited the Niagara Falls Air Reserve Station last week named, Tianna Colarusso. The 9 year old was commissioned in as the youngest honorary U.S. Air Force 2nd lieutenant as part of the “Airman for a Day” program.

According to its website, Stone’s Buddies supports families coping with “chronic and life-threatening illness.” The mission is to provide networks of support and resources, as well as friendship and fun. The program was created in memory of Stone Filipovich, who suffered from a highly aggressive brain tumor. For four years he fought the malady, mostly in the hospital undergoing surgeries, tests and chemotherapy, but it’s said he kept smiling.

“Stone’s Buddies is a support program for patients and their families struggling with the emotional and social issues that accompany chronic and life-threatening illness. Whether they are battling cancer or learning to live with a lifelong illness, their worlds are forever changed. Our goal is to connect them with others in similar circumstances, give comfort and friendship when they are in the hospital and serve as a bridge between the patients and those in the community who would like to help,” reads the program’s mission.

“Tianna applied for this program,” Jerge said. “We have an application process that our kiddos fill out. They write a little bit about why they want to do this and why they might want to see the Air Force base. We’ve been doing this with their reserve station, (this) is the fourth time now. We work through the names of applicants and Tianna came up next.”

Upon her arrival, Tianna was given a jumpsuit and sworn in by Col. Mark Larson.

“Tianna Colarusso having been appointed the grade of 2nd Lt. in the United States Air Force, solemnly swears that she will support the Constitution of the United States, and she will take this obligation freely and you will enjoy your day as the newest member of the 914th Refueling Wing and the 107th Attack Wing,” he said. “Do you agree?”

“Yes,” said Tianna and the two saluted each other.

Tianna was asked questions by the press and in a shy voice said she was ready to have fun.

“She has immune deficiency and she has hypoglycemia, and really bad lungs,” her mother said. “She’s got a respiratory illness right now that we have to watch carefully, because sometimes when she becomes sick she ends up in the hospital because she can’t keep her oxygen levels up. We monitor her at night; she has a feeding pipe overnight, too. If anything goes wrong with that, we have to bring her to the hospital. She has chromosome 9p deletion and replication, it’s a rare chromosome abnormality”

The young airman was walked through to the on-base fire station where she got to ride along and shoot the water cannon from the front. Later, she was given dog tags, lunch and then finally was able to get into the cockpit of a real-life Air Force jet.

“I think it’s a time for us to give back to the community. There are a lot of people out there, they’re great patriots if you will, and it’s good for us to give back and recognize that occasionally,” Larson said. “You wear the uniform off base here and everybody will say, ‘Thank you for your service,’ but there’s a lot of people who do a lot of great things that don’t get recognized.

“It’s a chance to recognize those people who do a good job.”

“She’s been through a lot. For her to be able to do something like this is so great,” Colarusso said. “Even though she’s been through so much, she is the happiest and most friendly kid ever.”

The 914th Air Refueling Wing was established in 1944 as 3rd Combat Cargo Squadron. There is a total of 1,609 personnel assigned to the unit with 1,030 of those being traditional reserve, and 268 active guard reserves, as well as 122 contract civilians and 189 non-contract civilians. The unit works with KC-135 Stratotankers, which refuels aerial vehicles and can carry 83,000 pounds of cargo.

According to a fact sheet supplied by officials, the base creates 412 indirect jobs at an annual value of over $20 million. The Niagara Falls Air Reserve Station is the largest employer in Niagara County 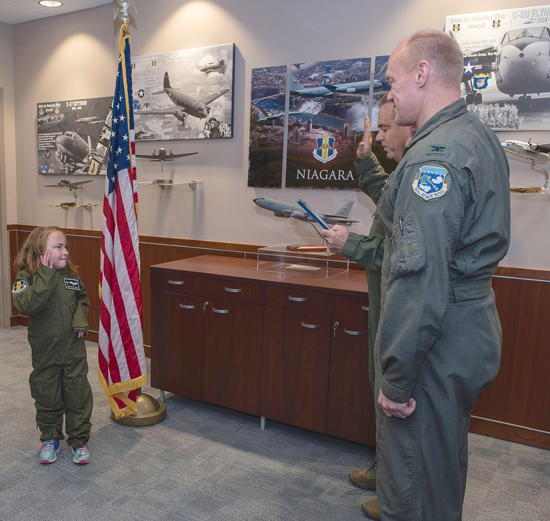 Tianna Colarusso salutes Col. Mark Larson and Col. Gary Charlton at the beginning of her “Airman for Day” tour of the Niagara Falls Air Reserve Station.