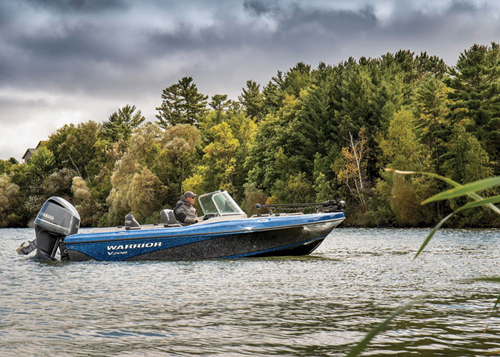 Winter in Buffalo-Niagara is starting to kick in. And the rough weather, particularly on local waterways, is already here.

You may not realize it, but Western New York has developed quite a reputation. Not only in the quality of its fishing – Lake Erie for its walleye; the lower Niagara River for steelheads, walleye and perch; Lake Ontario for Chinook, perch and salmon; and trout of all kinds in the Finger Lakes – but also how the area’s fishermen and guides handle rough weather. So much so that the specialty boat makers are now paying attention.

Ever hear of Warrior Boats?

Founded in the early ’90s and based in Melrose, Minnesota, this manufacturer of premier fishing boats built for challenging conditions has been popular with fishermen on Midwest lakes, even up into the Lake Winnipeg area of Manitoba.

Now, Warrior Boats is breaking in on the Western New York sport-fishing scene.

“We’ll be the farthest east they’ve ever come,” said sales rep John Zimdahl of Collins Marine, located near the South Grand Island Bridge. “The next closest dealer to us would be south of us in Cleveland. (It’s) their only exposure to Lake Erie.”

Zimdahl said Lake Erie, with a walleye population estimated to be a staggering 70 million, has become a fisherman’s paradise, with tournaments and countless fishing-guided excursions becoming the norm. Couple that with the Niagara River’s year-round prized fishing and major tournaments throughout the Lake Ontario basin, and you can understand why this region is fast becoming big league.

“We partner with him; we give him a boat, a demo to promote the line,” Zimdahl said, adding that, in the past, Rores has worked with Robalo boat models.

That’s where the Warrior Boat line caught his interest.

“With the popularity of walleye fishing on Lake Erie, he’s the one that brought this boat line (Warrior) to the table, told us about it,” Zimdahl said. “So, we investigated it, and Warrior was glad to try coming this Far East. (Jim) said, ‘These boats (Warriors) are so tough,’ he’s going to use this boat in the winter, even though it’s fiberglass, in the lower river.”

A fiberglass boat, in the winter?

What makes Warrior stand out?

“They use a totally fiberglass stronger system in the boat. It’s all foam filled for flotation. And they have a unique hull design that makes them run great in the rough water – a deeper hull. They have models that they specialize as walleye fishing boats,” Zimdahl said. “So, it’s (the hull) going to be deeper than like a Ranger bass boat. But the ride in the rough water, a 20-footer will ride like a 24-foot Robalo or Seaswirl or something of similar nature.”

“We don’t know what to expect, (but) we’ve got these serious fishing guys,” he said of WNY fishing guides.

Zimdahl said Collins Marine plans to have its first deliveries of Warrior Boats in late November, and will do a show event for area fishing guides in early December.

“I’ll get my first two the last week of November. And then, Dec. 7, the rep. (Kent Andersen, national sales manager of Warrior Boats), is actually going to be here, so we’ll have the two boats in the showroom and we’ll do a little open house/afternoon event. Kent Anderson will be here to answer questions.

“And these fishing guys, they’re intense about what they do, they’ll have questions.”

Simply put, these boats have it all, and then some, for the discriminating fishing guide. Expected engine choices include the ever-popular 300 Yamaha DEC four-stroke model line with 47-gallon capacity gas tanks.

“Any of the ones that we stock are only going to be powered by Yamahas. They (Warriors) can do E-Tec, they can do Suzuki, they do Mercury, but we’re a Yamaha package dealer; that’s what these fishermen want,” Zimdahl said.

“Look, they’re quiet, very fuel-efficient, have more life expectancy than an inboard-outboard. They’re four-strokes now and no more difficult to maintain than a stern drive,” Zimdahl said of the Yamahas.

“(Warrior) will customize a boat the way you want it; there’s an unbelievable amount of options that are available,” Zimdahl said. “For example, the 208 D-C, there’s 13 different engine selections, then they offer kicker motors, every boat is standard with an electric trolling motor. You could crazy with the options, there’s got to be 80 different options.”

Zimdahl said base prices for the new Warrior models at Collins Marine are expected to be in the $86,000 range.

“It’s a new type of boat being offered in our market,” Zimdahl said of the new Warriors. “It’s a serious fishing boat. We feel our competitors in the marketplace to this boat will be the Ranger bass boats, which you can only get with Mercury outboard power. Fishermen like the Yamaha better, and then Lund aluminum boats.

“Even though it’s an aluminum boat compared to fiberglass, I think the Lund buyer would buy one of these boats, because, first of all, it’ll be a better ride with fiberglass. It’s heavier, has a better hull configuration, more control in rough waters.”

“It will be an informal thing. We’ll have the boats,” he said. “You’ll like what you see.”

For more information, call Zimdahl at 716-875-6000, visit www.collinsmarine.com, and check out the Warriors at www.warriorboatsinc.com.