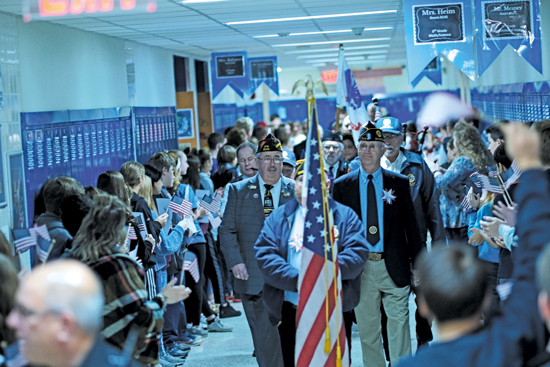 Island veterans paraded through the halls of the Grand Island High School and Veronica Connor Middle School Thursday to the applause and thanks of Island schoolchildren in the third annual Veterans Parade.

Before the parade began, VCMS Principal John Fitzpatrick said over the school speaker system: “Veterans, you are living examples of commitment, loyalty and sacrifice. We thank you very much for the sacrifices that you and your family have made in whatever capacity that you have served, because those sacrifices allow us to go to school freely, to travel throughout our country freely.”

“You made a commitment and a covenant really, to lay down your life for these young people,” he said.

Grand Island High School Principal Michael Lauria told the veterans a the end of the parade, during a reception in the high school cafeteria: “I believe we started this tradition about three years ago, just because we recognize how important it is for our young people to value and honor service, character, commitment, and really embracing our country’s past, present and future. It’s become an event that our students truly look forward to every year and is one of our most exciting events that we do have here at Grand Island.”

Lauria noted that last year’s graduating class has the highest number of students committed to joining the service after graduation in about 20 years.

At the cafeteria, Lauria surprised 92-year-old veteran Warren Richard with a high school diploma. Like many in the Greatest Generation of the World War II era, Richard had joined the service prior to completing high school.

Lauria presented Richard with the diploma saying he had satisfactorily completed the program of study requirements required by the Board of Education and approved by the State of New York.

Richard is invited to commencement in June.