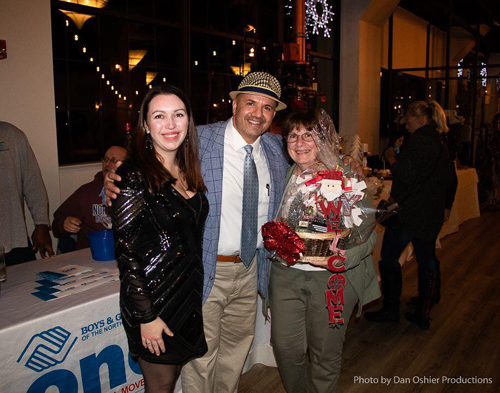 John Gatas stands with Kimberly LaRussa and Terry Smith at 2018 Everything NT Festival.

'Everything NT Festival': From videos to festivals, all about NT

The “Everything NT Festival” is in its second year to celebrate North Tonawanda in a special event. While the event lasts only three hours, it’s packed full of good drinks, good food, an open bar, local vendors, and a basket raffle to benefit the Niagara SPCA.

Originally though, Everything NT was really a labor of love spearheaded by John Gatas, a realty agent and life-long native of North Tonawanda.

“(We started by) creating videos by interviewing business owners,” Gatas said, referring to himself and Kim LaRussa, a local media professional. “Then we started showcasing different events and different kind of things that North Tonawanda has to offer. These are videos that we do, and we don’t charge. It’s a service that I provide as a community service.”

Restaurants, shops, waterfront, nightlife; these are all attributes of an upcoming community Gatas said he wanted to show everybody.

“The first video we did had 6,000 views,” Gatas said. “Then it just started taking off from there. It just kept growing and we went from having no followers, till right now, Everything NT has just about 2,800 followers from 16 to 18 months.”

Gatas said that since his family came from Lebanon a generation ago. North Tonawanda is where they’ve put down roots.

But he didn’t want it to just be the videos. The next step was to get everybody together and hold a festival.

“To be perfectly honest with you,” he said. “I didn’t do Everything NT to promote my business, it had nothing to do with that, but what I found is that it’s very organic. People are curious of what people do. Organically, people want to know, ‘What does this guy do, other than making videos?’ They’ve realized now that I’m a real estate agent, and I live in the community of NT and I do my business, a good portion of my business in the North Tonawanda/Niagara County market. I want people to know that I promote the community because I believe in it. I’ve been born and raised here. I live it. I breathe it, and if you love my videos then you’re going to love me professionally because I care about you and how you’re going to succeed.”