The 2019 Niagara Wheatfield “Athletic Hall of Fame” and Niagara-Wheatfield’s “Falcon Wall of Fame” received a new class of inductees over the weekend. Those chosen were honored in a special ceremony.

“You’re going to hear a lot of good things about a lot of people,” said Alan Pogel, chairman of the “Athletic Hall of Fame” and “Falcon Wall of Fame Board.” “There are some great individuals, that’s for sure. Eight, who are athletes, and 11, who are on our wall of fame. People that did so much for this district over the years, and people who stood out themselves. We’ve had a ton of support from the community. It’s just an excellent event that we hope everybody enjoys.”

“Ladies and gentlemen, what an honor it is to be here today,” Pogel announced to the assembly. “It is humbling and inspiring to be in the presence of a group of individuals whose talents and efforts mean so much to this district. Today’s celebration is a reaffirmation of the greatness and goodness that is N-W at its core.”

“I’m going to talk about our first inductee. He was a teacher’s teacher, and an administrator’s role model,” said William Ross, NCCC chairman of the board of trustees and on the “Falcon Wall of Fame” committee. “He gave 34 years to this district with exceptional service. To faculty, to students, to our community.”

Many more words of celebration followed from both Ross and Bruce Strassburg to honor those whose achievements are special and ongoing, to those who still live in the Niagara-Wheatfield School District. Many of the inductees have passed and their awards were received by their families.

“Recently I went to a conference. Athletics and extracurricular activities were referred to as the other half of education,” Niagara-Wheatfield Athletic Director Matthew McKenna said. “I think we all can agree with this statement just by reflecting back on our own lives. The lessons that we have learned, to our own 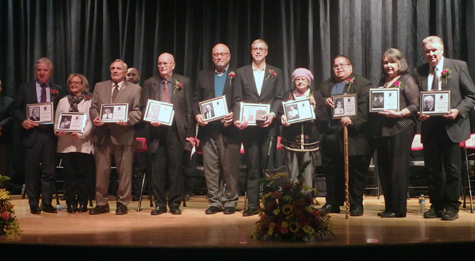 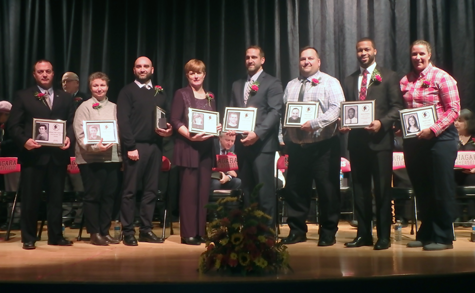