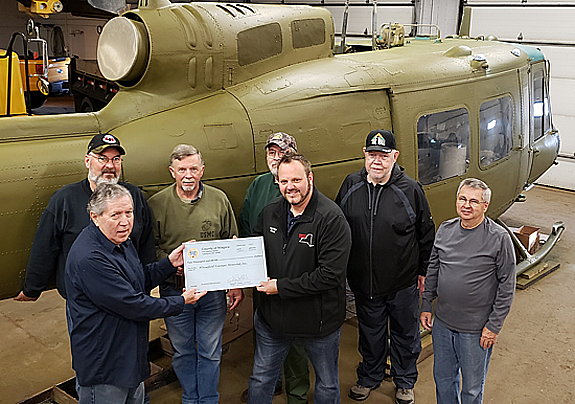 The 1965 Huey helicopter is a big thing to miss. It’s been gone for about a year now, but no one should be alarmed. The Vietnam era helicopter and its compatriot, the massive tank in front of the Town of Wheatfield Highway Department building, will be back together again at Town Hall on Church Street. It’s just a question of when.

The helicopter has been repainted, the trash has been cleaned out of it and some of the exterior parts have been re-installed on this massive, 42-foot aerial vehicle, which has been in front of the building since 1993.

“It’s suffered much from the weather, being outside for almost 25 years, like any of us would,” said Tom Kontac, project leader for Veterans Memorial Inc. “We had a pretty good amount of damage done to it. I think some of it is from vandals, because there were some incidents of boys breaking windows and things like that. That was a problem.”

Kontac and others on the project said it looked like animals had also gotten into the helicopter and there was evidence of straw and nesting materials in it, as well.

“There was really nobody to do (the renovations) when Don MacSwan called out for volunteers to start the project,” Kontac said. “He’s really the person who wanted to get it going. He was injured in Vietnam. He is a recipient of the Purple Heart, and it was important to him. Being important to him, as you can see, it is important to a lot of veterans here in the area. We assembled this group, and starting in late November (last year), we started taking it apart because it couldn’t enter the building (the way it was). We were very fortunate that Paul Siegmann, the highway superintendent, gave us this space."

According to Jeff Kasper, a retired reserves soldier, the new memorial dedicated to “All Service” at Town Hall will put the helicopter on a 10-foot concrete pedestal. Another project member, Harold Ball said the helicopter was originally a NATO helicopter in Germany during the Vietnam War. Ball said he saw a lot of helicopters just like it in Vietnam, where he served as a senior crew chief.

“We’re making it a medic helicopter, because of Don MacSwan,” Ball said. “We’re putting a Red Cross on it and everything. He’s been a big support.”

At the moment, Kontac is looking for a place to store the helicopter for the winter. There is an issue with the concrete at the memorial space, Kontac said, and it will not be ready for this Veteran’s Day. He said he’s hoping for next spring to have it put together completely.

“I have one offer for a warehouse. The only thing I don’t know if we’ll be able to get into the warehouse during the winter months,” Kontac said. “Or if it’s just going to be there, we’ll tarp it, cover it up and see it in the spring time.”

The project has made some ripples in the community, even to the Niagara County Legislature, which awarded Veterans Memorial Inc. $2,000 to continue the renovations and provide the infrastructure the new memorial will need.

“This is part of larger memorial that will be going in. This helicopter is really the first phase,” Kontac said. “The second phase is the tank. It will be moving over. Our crane people have already come out to look at it. They’re very good in terms of moving things that weight. … It’s really a three-year project altogether. So, (the helicopter) next year springtime; the tank, sometime in the fall; and then we’ll finish the memorial after that.”

“I spoke to the legislature about two weeks ago and I knew they were giving that money, so I thanked them for that donation because it’s important,” Kontac said. “We are a 501(c)(3) organization, so taxes are not an issue for us, but cash is an issue. We’re always fundraising and I’m hoping some funds will come in.”

Donations are accepted on the group’s GoFundMe page: https://www.gofundme.com/f/k9ztkx-town-of-wheatfield-veterans-memorial.