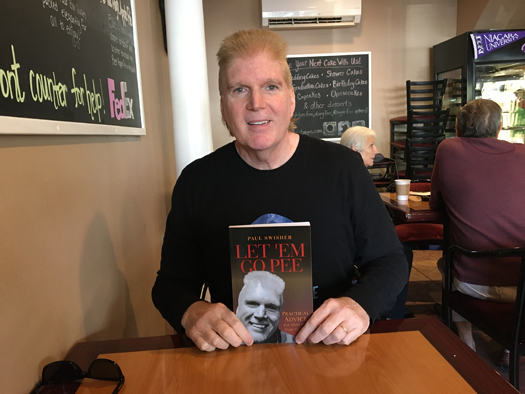 Paul Swisher with his book.

Paul Swisher is many things. Husband, writer, musician, KanJam co-creator. But the biggest part of his life was originally almost just a temporary thing. In his book, “Let ‘Em Go Pee,” he talks about his 32 years in the teaching profession and the lessons he’s learned.

Swisher will visit to the North Tonawanda History Museum at 7 p.m. Tuesday, Nov. 12, to talk about the book and the lessons his teaching career taught him.

“In my case, I kind of came into teaching through the backdoor,” he said. “I never intended to be a teacher. I was a social science guy, I had a bachelor’s in psychology and I was getting all my ducks in a row to work on a Ph.D. and become a clinical psychologist.”

“I was working as sex-ed counselor at the University at Buffalo and I was applying for fellowships for PhD programs and they weren’t falling into place. I was ready to take the leap and go further into debt, and at that time, New York State was so hurting for science and math teachers, because there was such a mass retirement.”

Swisher explained he was “in the right place at the right time.” The Empire State Fellowship program was recruiting four-year degree holders to go back to school and get their math or science certification. The decision to take advantage of that opportunity changed Swisher’s life completely.

“I always planned on maybe teaching at a university level and I just thought, ‘This is an opportunity: I can avoid going deeper and deeper into debt.’ So, I applied to the fellowship and I won the fellowship; and within a very short period of time I was certified as an earth science teacher,” he said. “I walked into a job, teaching at my alma mater (North Tonawanda High School). It was like I never left. I grew up in North Tonawanda; I was a North Tonawanda guy; and I ended up getting a job in North Tonawanda. For me it was great, because I came in to the occupation with a skill set that a lot of the new teachers did not have.“

What he had was simple.

“The psychology aspect,” Swisher explained. “How to communicate effectively with people. How to manage groups of people. Because, if you’re going to be a teacher ¬– cardinal rule No. 1 – if you have to be able to establish and maintain classroom management. You have to be recognized as the person in charge. You have to instill the students a desire to want to do what you’re asking them to do. To be on your team.”

In essence, that is what the book, “Let ‘Em Go Pee: Practical Advice For Those Who Dare To Teach” is all about. Swisher gave the anecdote of a young teacher he attempted to guide, but who didn’t listen to the advice he was giving.

“I had a friend of mine, I was his mentor teacher when he came in,” he said. “His very first couple weeks on the job, we’d eat lunch together. He’d be talking about this student that would come in every day, start talking to her friends before the bell rang, and then, as soon as the bell did ring, she would come up and ask him if she could go to the bathroom.”

Swisher did his best to steer this young teacher in the right direction. He advised talking to the student, one-on-on, keep her after class and tell her it’d be appreciated if she was there at the beginning of class. If that didn’t work, a call to the parents, and at last resort, if none of that works, send her to the school nurse to find out if there’s a physical problem.

Unfortunately, the young teacher did not follow the advice given by Swisher and other teachers. He let the anger build up and confronted her on her habit in front of the entire class.

“One day, a couple weeks in, when she asked to use the bathroom, he said, ‘No. You should’ve gone before; you’ve been doing this every day.’ He chewed her out in front of 30 14-year-olds.

“She tells him, ‘Well, I really have to go to the bathroom.’ He said, ‘Well, you should’ve gone before the bell rang.’ They go back and forth until she finally says, ‘I’ll go to the bathroom right here in this classroom if you don’t let me.’ He calls her bluff. So, this 14 year old girl walks up to the front of the classroom, takes a little, metal garbage can, pulls her pants to her ankles, sits on the garbage can, and pees in the garbage can!”

Swisher explained that should never happen, but it’s what inspired the title of his book.

He said it was his ability to be a people person that helped him along with his career. There’s no class in the university to prepare teachers for that, he said, so he tackles it in his book.