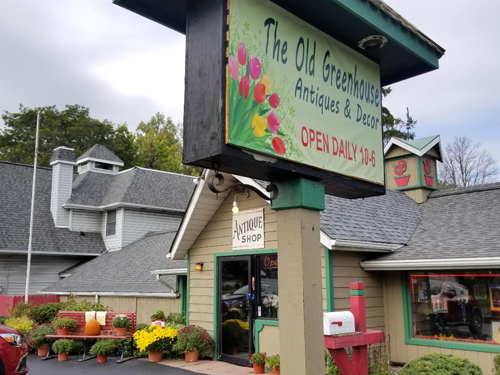 The Old Chapel Antique & Artisan Market and the Old Greenhouse Antique & Décor are both large, yet charming buildings on Robinson Street in North Tonawanda. The owners of these co-op business models started out small with buying and selling old – yet valuable – items on and offline.

Jacob Wankasky, who is the proprietor, along with his wife, Jennifer, said he never expected he’d be the owner of not just one, but two floor-spaces.

“When this building came available for sale. We decided it was a building we definitely wanted to buy. We felt it was a positive that it was within a mile of our other store, so that the two stores could work off of each other,” Jacob said of the Old Greenhouse which had its opening in September.

“This store has a little bit of a feel. It’s more of a focus on antiques and home décor and the fresh flowers since it was a florist for 50 years,” he continued. “The building has a bit of a history, which is another reason we were so drawn to it, because of the unique architecture of it being a former greenhouse, and the history of it operating as a business in North Tonawanda for almost 100 years – 50 years as a greenhouse and almost 50 years as a florist.”

Yet another reason for the purchase is the Wankaskys are expecting their first child in January. The Old Greenhouse has a house attached to it.

“So, we’ll be living in the house attached to it,” Jacob said. “Which has its advantages. It was our first home purchase.”

The story of the business is wrapped together with the Wankaskys’ personal lives. They were married in Feb. of 2014 and Jennifer was completing her bachelor’s at Daemon College in psychology.

“There was need for extra money for books and tuition, so we started buying and selling online and it grew from a hobby into a small business. We rented space from Antique World and were dealers ourselves out at Antique World and various flea markets and antique shows,” Jacob said. “Then my wife completed her bachelor’s and went on to complete a master’s degree at Medaille College. When she graduated, we decided we were doing well and we took it to the next level and rented a retail location of our own.”

“We opened a store up in Pendleton, New York, in February of 2017 and then we ended up closing that old location and reopening up in the Chapel in November of 2017. It was a much larger space, and North Tonawanda is our hometown,” Jacob continued. “The opportunity was unique, because I grew up attending Ascension Church. I was an altar boy there; I was baptized there. My parents were married there. My family has a huge connection to Ascension and we had deep roots within that building. It was almost like a homecoming.”

Jennifer did graduate from her program and the couple continued on getting into their business and being very successful with it. Jacob said the Old Greenhouse was focused mostly on décor.

“Like the Chapel, it’s a co-op business model. We work with various local vendors, dealers and artisan. Each vendor rents space from us and then we handle the sales process for it,” Jacob said. “Basically, they’re responsible for their area, keeping it stocked and from there we handle all the sales and they get a report. At the Old Chapel we have over 130 vendors and here we have approximately 25 vendors. The fall décor and flowers has been the best seller here so far.”

Jacob said that word of mouth, the loyalty of their customers were reasons why the second location has been so successful.