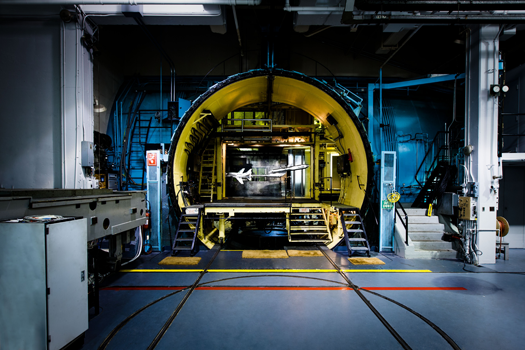 The Calspan trans-sonic wind tunnel is located near the Buffalo-Niagara International airport. Calspan gave NIMAC a tour of the facilities.(Image courtesy of Calspan)

On Thursday, the Niagara Military Affairs Council was given a tour of the Calspan wind tunnel in Buffalo. The wind tunnel “provides impartial test service to evaluate the aerodynamic flight mechanics and performance characteristics of aircraft and other aerodynamic vehicles.”

Members of NIMAC got an in-depth look at the highly secured facility.

“We do appreciate you all coming out tonight and showing an interest,” NIMAC Chairman John Cooper said. “Each year in October we go to a defense contractor and last year we were at Moog and here we are at Calspan and we appreciate their hospitality.”

“This wind tunnel has been around for quite a long time,” said Jeff Weisbeck, vice president in charge of the wind tunnel. “It was actually built during the war and the tunnel was not completed prior to the end of the war. After the end of the war, they were going to scrap the tunnel. There was the thought there would be no need for aircraft development; the war’s over, we can go on with our happy lives. Fortunately, a group of people said, ‘Geez, we’re going to need this wind tunnel and it’s a shame to let an asset like this go.’ So, a group of people got together and found a way to purchase this from Curtiss-Wright and keep it active.”

That group of people was from Cornell University, which owned the wind tunnel into the ’60s.

“Up until the time of the Vietnam War, we were associated with Cornell University,” Weisbeck continued. “During the Vietnam War, the students were not happy with Cornell owning an asset that was involved with defense, and demanded that the university divest of this wind tunnel. From that period on, the wind tunnel was sold to various entities from a number of big contractors.”

In 2005, Lou Knotts and John Yurtchuk, who are now the owners of Calspan, bought the wind tunnel from General Dynamics.

“We are the only privately held trans-sonic wind tunnel in the U.S.,” Weisbeck said. “It’s very unique. Being privately held gives us a lot of flexibility. We have the ability with the right licensing to work with foreign governments on new aircraft development. That provides a good source of our revenues, as well.”

“What we test here is we test new aircraft that is being developed, especially those aircraft that are going to transition through the trans-sonic regime,” he continued. “We’re involved with the aircraft. We’re involved with the stores, which are munitions and the bombs. We also do a very special test where we look at how a missile or bomb will either be launched or drop from the aircraft. That is very complex because, not only do we have to find out what the stores are going to do, but also the aircraft. … There are probably two or three tunnels that do that successfully worldwide.”

The group was taken down into the command room for the tunnel. Skip Herald of Calspan took over the tour.

“This is where we run the wind tunnel, collect data, move the model, control tunnel temperature and pressure,” he said. “This is where an operation manager sits. The customer gives us a ‘run-matrix’ we call it; it’s what they want to do with their test. It could be, ‘I want to run Mach-2 at 2 million,’ or, ‘I want to move the model from minus 4 to plus 10.’ They have a matrix from the customer, so, they’ll tell the guy sitting right over here, ‘I want to go to Mach-1.2,’ and they’ll take the drive to 1.2.”

The facility floor was “messy” Herald said. There were different vents open and wire coils on the floor. There were pipes along the ceiling and the wall, as well as boxes of tools. For the group, it was very much like a “Stars Wars” set without the aliens.

“We also had a fire, a couple of weeks ago,” Weisbeck said. “I got a call from our engineering director. He said, ‘There’s a fire.’ Everyone just converged, and what was amazing about that is the team of 45 people just came to Calspan in the morning. No matter what shift they were on. Everybody worked that. We had engineers holding buckets, and mechanics do electrical work. We just did what we had to do. We got our next customer into the tunnel for a very complex test, and that test was successful.”

“As an organization, we advocate and promote the airbase, but we’re also very proud of the heritage we have here in Western New York with aviation,” Cooper said. “We’re excited to take tours of the various defense contractors we have in the area and allow our members to see what it is, and have pride of what we have in Western New York.”