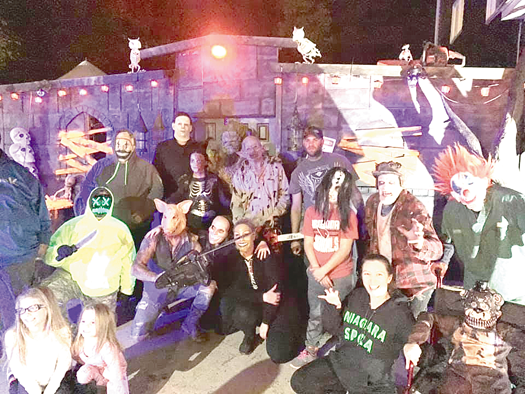 Looking for a spooky event, not able to afford Frightworld and maybe want to give to a good cause, too? Look no further because this year; the 870 Lee Home Haunt in North Tonawanda has you covered.

The cost is $5 (kids under 12 are free) and the whole event benefits the Niagara SPCA.

Kyle and Alisha King, along with their three children, are now in the second year of their very own scare factory located next to their home in North Tonawanda. At the same time, Kimberly LaRussa, an event coordinator of the Niagara SPCA, was looking to make a fall event.

“I was looking to do some sort of fall event,” LaRussa said. “I posted on Facebook about the possibility of a haunted house and see if anyone had any ideas about doing one, and how to go about something like that.”

“So, someone tagged Kyle King, and he immediately got in touch with me. He mentioned to me that haunted houses are a lot of work and it would not be beneficial to have one just for one night,” she continued. “He suggested that we do it at his house and we could have it on all these dates! I was so excited and grateful them and we just went from there with planning.”

The Kings, masterminds behind the 870 Lee Home Haunt in North Tonawanda spoke to the Tribune.

“We did a scene, three years ago, and a lot of people came,” Alisha said. “Just to look at it.”

“Last year we took it a little farther and made it an actual walk-through, and we had 1,000 people within eight days last year,” Kyle said.

Kyle described working in the haunt industry in Cheektowaga and going to Halloween expos to get the newest scares from artisans who specialize in scary masks and other items.

“I’ve always had the passion for it, just didn’t make it my own thing,” he said.

For this Halloween, they’ve already had 1,000 people walking through their side lawn. The Kings were right; this was no one-day event.

“This started Aug. 11; three months of time setting up; I can’t just do it for one night,” Kyle said and laughed.

One thing you won’t see at this haunted house or the SPCA is a pet cemetery.

“Recently we celebrated saving 15,000 lives since becoming a no-kill shelter in 2012,” LaRussa said. “That’s really incredible, because being a no-kill shelter is not easy. It requires a lot more funding, and the animals can stay as long as they want. We have animals come in and sometimes they’re here for more than a year! That requires medical care; that requires food. So, animals can stay for as long as they need to. That makes us very, very special.

The Kings took the Tribune on a short run through the now day-lit scare zones, and it was still creepy. They said that, over the weekend, at least 50 people couldn’t get through because they were so scared.

“The last thing we want to do is send people in groups of 10,” Kyle said. He explained the tactics used in scare haunts. “They’re not going to experience the whole thing. Say there’s five people, and the next group is about five people. We don’t want to send all 10 of them in, because only the front people are going to be hit the worst. So, we try to separate people into their groups. If they have six people with them, those six people are going to go in. … It’s going to be more fun for them. Our door guy is incredible.”

Though there may be a wait –on Saturdays the Kings estimated an hour– there is also entertainment while in line. Scary entertainment. So scary, you might want someone to go home to in order to calm down.

“Having an animal should be like a mutual relationship,” LaRussa said. “Yes, you’re taking care of the animal, by giving them food and a home, but they’re giving you back so much more. They’re giving you friendship and love and kindness. That’s something that’s so rare and genuine that animals give to you. They give back to us even more, even though we’re the ones who are taking care of them.” 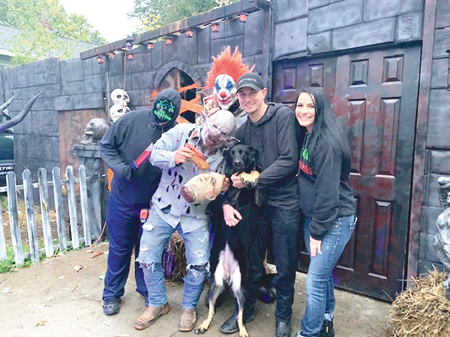