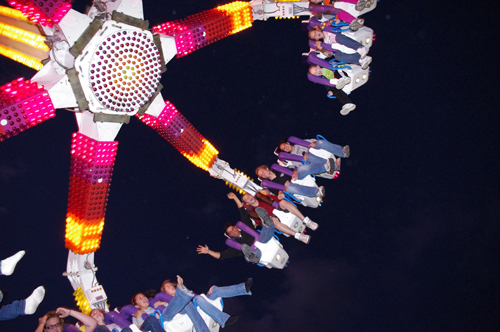 The Peach Festival will return to Academy Park in 2020.

Trustees in the Village of Lewiston on Monday unanimously approved the Kiwanis Club of Lewiston’s request to hold the 63rd annual fundraising event in the Center Street park.

An initial request was submitted in August. The board opted to table a motion until members could evaluate the park’s condition following the 2019 festival.

“You guys did a good job up there,” Deputy Mayor Vic Eydt said. “It was a hard time making some of the choices, but I think it worked out.”

In particular, Eydt said he was pleased midway provider Amusements of America moved its ride trailers off site.

“I had a lot of (positive) comments from people,” Eydt said.

Following the board meeting, Kiwanis Club Immediate Past President Marty Pauly said, “I am extremely relieved” to receive event approval. “It was extremely stressful, but it’s over.”

He agreed “the moving of the trailers was probably the best idea made. That’s the area where most of the people made compliments. It made everything look nice. Even the ride company said it looked nicer.”

Following last month’s Peach Festival, Welch formed a committee to assess Academy Park and formulate a comprehensive plan for the historic site’s future. The group spoke favorably of designing a park that could both boast new amenities – such as a walkway, art/artist events, a pavilion and perhaps even an ice rink/splash pad – and maintain enough green space to accommodate the Peach Festival.

At that meeting, Kiwanian Jeff Jordan gave a detailed presentation on how the park’s infrastructure has been specifically reconfigured to hold the Peach Festival. He noted numerous logistical challenges would arise if a new location was necessary.

“Jeff Jordan gave a wonderful report at the advisory council, and (informed) all of us that were not able to attend,” Trustee Claudia Marasco said. “Those were the things we were asking to see” when the original request was tabled.

“Kiwanis is full of knowledgeable people. I asked the right people to come in at the right time, and they imparted their wisdom on the situation,” Pauly said.

The Academy Park committee asked Fittante Architecture to prepare artistic renderings showing various arrangements. Those drawings, when created, will be discussed at a future meeting (no date has been set).

“Our wish is the bandshell (moved) over to the corner of Cayuga and Portage; a big pavilion along Portage Road; the (VFW ‘Circle of Honor’) monument; the bleachers would be down; and I said over in the corner of Cayuga and Ninth, we may be able to put the ice rink,” Welch said. “I talked to Jeff Jordan, who said we could put that chiller in so they don’t have to drive over the park anymore. It may be a better location.

“We’re trying to work it out.”

Kiwanians were granted use of Academy Park from Sept. 5-19, 2020. This timeframe includes set-up and teardown. The Niagara County Peach Festival is scheduled for Sept. 10-13.

Pauly said club preparations would “start tomorrow, now that we know it’s there.”