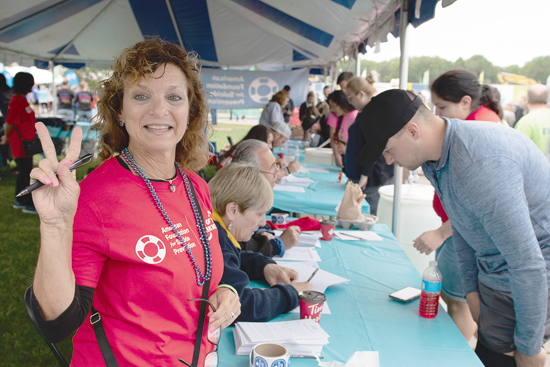 Walkers register for the Out of Darkness event in Buffalo in September. (Submitted photo)

Out of Darkness works to end stigma, encourage communication

The Out of Darkness Walk in Lockport will start with registration at 12:30 p.m. Sunday, Oct. 13. Walkers start at 1:30 p.m. and will journey one of two paths: one path on the south side following the Erie Canal for one mile and back, and the other on the north side following the canal for two miles and back. Participants will meet at the Lockport Locks Pavilion.

The Out of Darkness walks benefit the American Foundation for Suicide Prevention. It’s a tough thing to talk about, but the movement is growing, participants and organizers said. This will be Niagara County’s first Out of Darkness Walk and it’s being hosted by Eastern Niagara Hospital.

“(Suicide amongst 16-25-year-olds) is quite prevalent,” said Valarie Mostyn, a licensed social worker at Eastern Niagara Hospital. “That’s why we started looking to do the walk out here.

“They have walks in Buffalo; they have them in Rochester; but, for Niagara County and surrounding counties like Genesee, Orleans, we have to drive an hour to get to these walks. For those who are unable, it’s good to have something closer to home.”

To do this, Mostyn and her co-chairwoman, Amanda Newman, contacted AFSP and asked what to do to have a walk in Niagara County. They ended up talking to AFSP Western New York Area Director Missy Stolfi, who organized a Buffalo walk in September.

“There’s a good chance that everybody knows somebody who has been touched. It’s currently across all demographics, all backgrounds, all different kind of groups of people,” Stolfi said. “It’s currently the 10th-leading cause of death in the U.S.

“This is something that people don’t talk that much about in comparison to other health issues, and it truly is! It’s a public health issue and it’s really more in recent years that people are able to discuss it and approach it from that health standpoint, and starting to better work to understand it.”

AFSP tackles suicide from many different angles. One of these angles is research, but another is “preventative education.”

“Getting education materials out into the community to better understand (suicide) and better equip people in the community to know the signs and know the risk factors and be able to have a conversation about it,” Stolfi explained. “We’re currently in the midst of a really bold goal called Project 2025. We’ve identified, through looking at the numbers, four major ways we can really start to impact, in a quick and effective way, the suicide rate in the United States. The goal is to reduce the death rate by 25% by the year 2025.”

Another group that will also attend the walk is members of Mental Health Association of Niagara County.

“More times than not, I’m talking to youth,” said Danielle Conlan, who will head MHANC’s table at the walk. “The simplest way I can put it is: What you’re looking for in your friends and family is a change that sort of makes you feel a little off. You know your friends. You know your family. You know the little things that they do when they’re happy or when they’re annoyed. So, when you see something, or you feel something from your friend and you’re like, ‘That is not right,’ ask them, ‘Are you OK?’ If it just crosses your mind, ask them, ‘Are you OK? Are you thinking of attempting suicide? Do you feel this way?’ That’s the No. 1 advice that I give to people who wonder what they can do. Ask!

“Ask the question. Be upfront. Other signs you might be looking for? A sudden change in friends. Their moods may change and mostly be unpleasant. They might primarily be angry, sad, feeling neutral so they don’t feel necessarily happy or positive about anything in their life.”

One of the services MHANC provides is a helpline. Conlan described it as a “warm line.” She said it may be a step toward calling Crisis Services and that they often refer callers there if they determine the caller needs to be seen. However, she said, it’s a good place for people to call who know they need services or need a little support without calling Crisis Services for any reason they might have. The number is 716-433-5432.

“We will be there (at the walk) with a table. What our agency does, is we’re a nonprofit organization and, essentially, we work to stop stigma surrounding mental health and mental illness; by educating, spreading awareness and then offering other supportive services like day-to-day programs,” she said. “We are non-clinical, so we don’t provide any type of therapy or counseling, but indirectly it’s about people feeling accepted so they can talk openly.”

Legislator Rebecca Wydysh is also on the board of directors of the MHANC, a group she’s been involved with for over five years.

“I think mental health is just as important as physical health,” she said. “But people tend to set it aside. There is still that stigma attached to having a mental health diagnosis, and people, whether they’re embarrassed or they don’t want to admit they have a concern, (won’t talk about it.)

“Suicide, especially, is very difficult for people to talk about. No one wants to talk about suicide. It’s uncomfortable; but we have to. People have to know that, if they’re struggling, whether it’s anxiety or depression or suicidal thoughts, people need to know it’s OK to reach out. It’s OK to talk to your family and your friends and your co-workers, because there is help out there.”

“It is available,” she concluded. “But people have to be willing to reach out for that help, and that’s really what these walks and programs are really about. Reducing that stigma and letting people know it’s OK to talk about this. People understand what you’re going through – more people than even you realize.”

Thus far, the walk has exceeded its goal of raising $5,000. More information is available at https://afsp.org/chapter/afsp-western-new-york/. 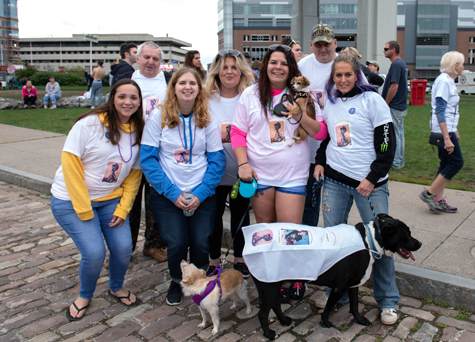 Scenes from The Out of Darkness Walk (Submitted) 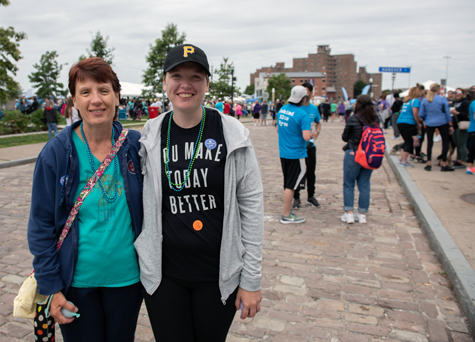 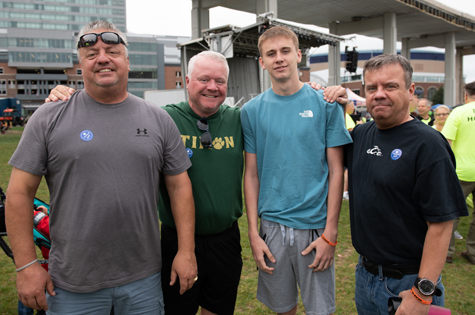 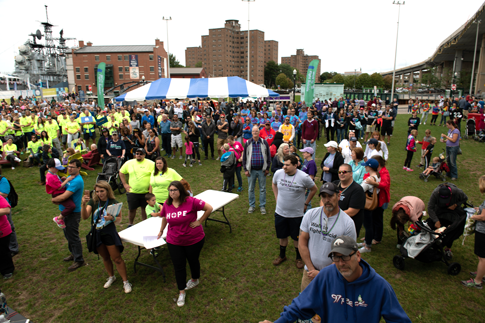