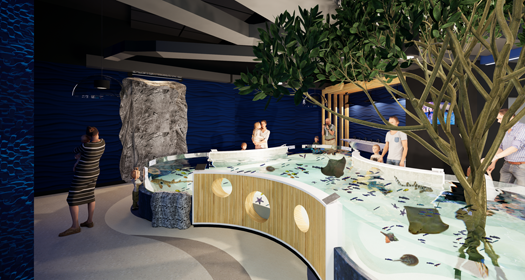 Pictured here is an artist's rendering of the new "M&T Bank Shark & Ray Bay" at the Aquarium of Niagara. Below, a diver is shown at last week Friday's press conference.

Taking out-of-town family and friends on a local tour is fun, if somewhat predictable. Maid of the Mist, the casino, Cave of the Winds, maybe a foray across the border, and of course, the majesty that is our wonder of the world, Niagara Falls. A lot of the time these activities can become a bit of an old hat, and maybe, just maybe, the plan may change to visit those out-of-town family and friends on their home turf and see how they like carting a tourist around for a few days.

Yes, sometimes that may seem like the only solution. …. But, it would also be making a big mistake.

The Aquarium of Niagara has been ramping up its own piece of property to properly serve both locals and visitors alike. For the past few years, the aquarium has made big changes such as “Penguin Coast” in 2018 and “Aliens of the Sea” in 2019. On Sept. 27, it announced even more construction to create a new – interactive – habitat for some of nature’s misunderstood children in the sea. It’s called the “M&T Bank Shark & Ray Bay”

“We know we have over 9 million people come here to see Niagara Falls,” Lt. Gov. Kathy Hochul said at the event announcing the project. She praised Gary Siddall, aquarium executive director, “But for you and your team to continue upping the game, to find ways we can get tourists who will do more than just look at the falls, but actually wander up our streets, explore new, interactive exhibits in places like the aquarium, or going over to the Underground Railroad Heritage Center we just unveiled last year, and taking a ride on our Discover Niagara Shuttle, all of the things that are going around here that were not even going around here a few years ago. I just feel that we’re at the cusp of a whole new era of this community, long overdue.”

According to the press release, the three projects have a value of $6.5 million. Moreover, 10,000 additional visitors are projected to visit the aquarium every year to see, and touch, the sharks and rays.

“I had a chance to pet the sting rays (at another aquarium) and I wasn’t sure what to expect,” Hochul said. “But they feel like velvet to me. It’s an extraordinary feel. They feel very soft. I’m not sure what it’s going to feel like petting a shark, but I’m always game. … I’m kind of familiar with sharks, because I’ve been in politics for 25 years.”

M&T Bank donated $250,000 to the exhibit. Other sponsors included the John R. Oishei Foundation, which contributed $200,000; the Niagara County Industrial Development Agency; the City of Niagara Falls, which contributed $167,000; and the Niagara Aquarium Foundation board of trustees. $237,000 was also received through a WNY Regional Economic Development Council Capital Grant for construction costs.

Jim Jarosz, an M&T group vice president for retail banking in WNY, as well as an Aquarium of Niagara board member spoke of supporting cultural institutions such as the aquarium. He equated this to serving the entire local community.

“With the addition of ‘M&T Bank Shark & Ray Bay’ exhibit continues an investment of our local institution that served our region as a source of education and inspiration for more than 50 years,” Jarosz said. “It continues to trend towards sustained growth and success.

“Secondly, the impact of investment this brings is well beyond the walls of this facility. In addition of keeping the aquarium experience fresh for the locals and the fans, it’s going to attract new visitors. In the area, across the country, and also, from outside this country.” 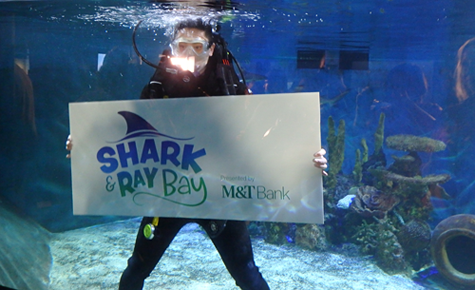 Vice President of the John R. Oishei Foundation Larry Cook echoed the sentiment of bringing economic change to the region, but also stressed the significance of a simple experience of visiting an aquarium as a child.

“It means a lot to me, specifically,” Cook said. “As a proud native of Niagara Falls, I remember coming to this facility as a child. I remember having those experiences helped to really create and develop my imagination, my creativity and my capacity to explore. Those experiences allowed me to say, ‘There’s a bigger world out there than the one that I reside in.’ I think they helped me look beyond what I felt were some limitations.”

“What turned out to be a very strategic position was our investment in tourism,” Mayor of Niagara Falls Paul Dyster said. “It paid off in terms of economic development. The investment, the job creation here in WNY.”

“Anyone from Western New York is going to be able to participate and enjoy this experience,” Siddall said to the Tribune. “We are not exclusive to people outside Niagara Falls. We’re really trying to broaden our horizons, reach in to Erie County, and reach into Niagara County; this is a project that really is inclusive to those all over Western New York.

“When people come to the aquarium, they know that they need lunch, they need breakfast. So, they know they’ll stop at a coffee shop down the street, where they’ll grab lunch afterwards. There’s activity happening down here. They’re much more likely to spend some time on Falls Street, in the state park. All these things are connected.”

“As the Aquarium of Niagara expands, they require more people; more people come to visit, that creates more jobs for restaurants, for hotels, for rental agencies. A rising tide floats all boats.”

The exhibit will include several species of animals, including sharks, stingrays, fish and a variety of marine invertebrates like sea stars, crabs and anemones. It will replicate a mangrove shoreline, which is a tidal ecosystem found in tropical estuaries and lagoons complete with the replication of natural lighting cycles in late spring of 2020.

The Aquarium of Niagara can be found at 701 Whirlpool St., Niagara Falls.