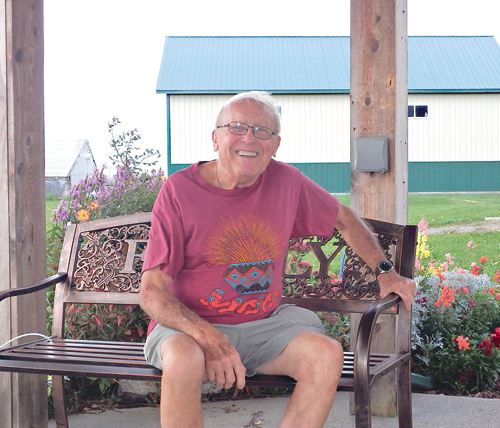 Glenn Wienke sits in the gazebo that will hold live entertainment for young and old during Autumn Fest, Oct. 5-6.

If you have kids between age 2 and 8 and are trying to have a nice day out of the house, this is your ticket to ride. Autumn Fest in Sanborn is coming back to the Farm Museum Grounds at 2660 Saunders Settlement Road from 10 a.m. to 5 p.m. on Saturday and Sunday, Oct. 5-6.

Member Bonnie Haskell described the event as family-friendly and listed the attractions coming to the stretch of land off Route 31.

“At 11 a.m., we’re going to have chowder ready on Saturday,” Haskell said. “And it’s going to be by the bowl. We’ll have the vendors inside, plus we’ll have vendors under the porch, here. We’re also going to have pumpkins on sale this year.”

The kids activities are going to include arts and crafts and a hay wagon ride pulled by one of the Farm Museum’s tractors. Farmer Tom will be there at 11 a.m. on the gazebo.

“He does a whole routine of children’s events,” Haskell said. “He gets them up there to sing and dance. He talks about farming, agriculture.

“The kids this year will be getting a little pumpkin and they can make a face on them. We have little pieces of felt that you can peel off and stick on. It’s all different kinds of faces. Every year we do that with the kids. Every kid will get a giftbag, some little goodies in it, like coloring books and knick-knacks.”

There will also be musical entertainment for both days. Starting at 1:30 p.m. Saturday, the Brooklyn Road Band will be playing.

“It’s a full band, five-piece,” said Glenn Wienke, a volunteer whose family had owned the farm for generations before selling it to become the museum.

Another visitor, or visitors, will be the Aquarium of Niagara Falls who, Haskell said, would bring “all their little critters” for examination by children and their families around 11:30 a.m. Saturday.

Something special about this basket auction is the basket donations earn the contributors a $5 sheet of tickets for up to three baskets per individual.

“Three baskets just came in,” Wienke said, referring to a visitor who had walked into the reception hall with her donations. “And there’s another set over here!”

Haskell went on to give a summary of the kinds of vendors that would be present.

“Everything the vendors bring in, you got,” she said. “Spices, and jellies and jams, all kinds of stuff. Antique dealers, fall décor, there’s a lady that makes handmade greeting cards, and a lady here doing Christmas stockings this year. So, it’s going to be an arts and crafts kind of thing.”

“We have food both inside and outside,” Haskell said. “We’ll have hamburgers and hot dogs outside.”

Haskell explained the event absolutely had to have peach shortcake by demand of the festivalgoers.

The admission to the event is completely free, but food and crafts will be sold by the individual vendors. Some of the sponsors for the event include the New York State Bridge Commission, KeyBank, Sanborn General Store, Gorge Travel, the Niagara River Region Chamber of Commerce, Innovative Solutions, Mount St. Mary’s Hospital, Rhoney Funeral Homes, Buffalo Coffee Roastery and the Town of Lewiston. The event is presented by the Sanborn Business Association.

“It’s great family fun with music, crafters on a beautiful farm with exhibits to soak up,” said Jennifer Pauly, president of the Niagara River Region Chamber of Commerce. “We sponsor it every year and the chamber promotes it and volunteers with the Sanborn Business Association.”

Events at the Farm Museum will continue into December with a ham dinner on Oct. 26, a pork chop dinner on Nov. 13, “Christmas at the Farm” running from Dec. 14-15 and finally, “Caroling at the Farm” on Dec. 21.