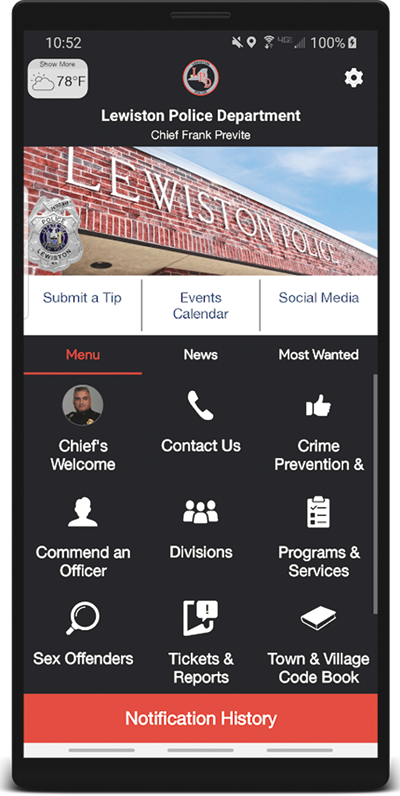 In a continuing effort to keep pace with today’s technology advancements, the Lewiston Police Department announced release of a new mobile app.

Created by THEPOLICEAPP.COM, a nationwide developer of custom police apps for law enforcement, the LPD app is now live and available to download for all iOS and Android users through Apple and Google Play.

LPD Chief Frank Previte, who has been working over past months to spearhead this new venture, said his goal has been to improve communication with the community.

“It give us the opportunity to get the information out real time, for the Lewiston Police Department to reach the most amount of people,” he said.

In discussions earlier this year with Supervisor Steve Broderick and the Lewiston Town Board (whose members voiced their support), Previte spoke of the problems he’s had with the LPD getting vital information out to the community.

“One of the concerns I’ve had is communication with our residents,” Previte said.

He mentioned an earlier problem with reverse 911 not being unable to contact the community in times of emergency, whether be weather-related, school or road closures, etc.

“On the police side, we’ve had barricaded subjects, where we’ve had to keep people out, or some other form of pressing issue,” Previte said.

Commenting on the communication problems, he added, “Almost no one has landlines anymore; we’ve had trouble reaching people. Websites are also not used as much, either; most interactions today are being done through social media. Apps are just so much more popular.”

Previte said the LPD is the first actual police agency of its kind in New York state to embark on such a venture – and that other large police departments (such as Buffalo, Rochester or Niagara Falls) have yet to engage the concept. He said the LPD picked up on the idea from the Niagara County Sheriff’s Office, which earlier debuted its own app to the public – also developed by THEPOLICEAPP.COM.

Funded by the department via the proceeds of earlier LPD equipment auctions, Previte said the app development price is under $2,500, plus a yearly renewal operations fee.

Describing it, he said there are different options the LPD could incorporate, such as sex offender lists, information about the department, contacts, etc.

“Probably the most beneficial part of it is there’s a push notification option,” Previte said. He likened that to receiving a weather alert.

“We would have the opportunity to be able to do that as a police department, and also as a town,” Previte said. He noted the app could be applicable for any department updates in the town, such as Town Hall information, Highway Department news, weather announcements, and the like.

Discussing the new app, Previte pointed to its many user-friendly features:

•A “Submit a Tip” link where the public can provide information, with images, on areas of concern to law enforcement. This could be submitted either anonymously or with contact information provided.

•A sex offender listing. LPD teamed up with OffenderWatch, the nation’s leading registered sex offender management and community notification tool, with hundreds of leading agencies involved. The link enables LPD, NCSO and others to manage and monitor the whereabouts, conduct and compliance status of registered sex offenders in the county and avail that information to the public.

•A “Notification History” link that can provide users updated information on arrests, crimes, special events, street closures, no parking areas, lost pets and the like.

“Push notifications are critical for us. This allows us to keep in touch with the community and the ability to interact,” Previte said.

•A “Tickets and Reports” link, where the public can obtain information on such items as accident reports, MV-104 forms and incident reports. Information sought on vehicle/traffic tickets and the like would still need to be obtained by the Lewiston Town Courts or the court jurisdiction where the violation occurred.

•A “Programs and Services link, which provides information on such LPD services as the DARE program, child restraint safety inspections, residential commercial assessments and crime prevention and safety tips for Village and Town of Lewiston residents.

•A “Town & Village Code Book” link, that provides code information for both the Village and Town of Lewiston governments.

With the app now live and available to users at no charge via the aforementioned links, Previte urged residents throughout the River Region to download it today.

“One of my goals has been to engage with the community – have a conduit for safety and information to the community. This is a great tool for people to use to check on issues of importance,” Previte said, noting he looks forward to realizing its utility in the Lewiston community.