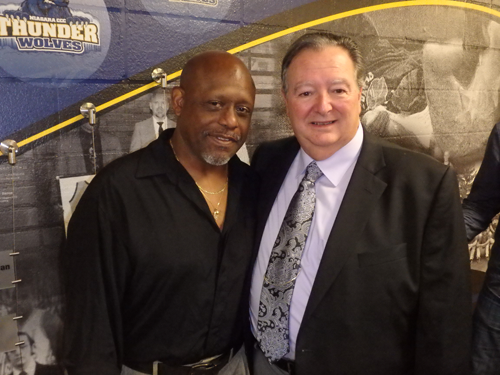 Willie Moore, wrestler champion, left, stands with Town of Niagara Supervisor Lee Wallace. Both are inductees on the NCCC Athletic Wall of Fame.

Athletes, both present and alumni, coaches, and administration all gathered together Saturday at Niagara County Community College’s unveiling of its Athletic Wall of Fame.

Bob McKeown, assistant vice president of management at NCCC, addressed the crowd; calling out many a name - all of whom had some connection with the athletic program and its success.

McKeown went on to introduce many NCCC Foundation members, as well as former Chairperson Bill Ross, Director of Public Relations Barbara DeSimone, and former Athletic Director Lee Wallace, now the supervisor of the Town of Niagara and on the wall himself.

The coaching staff of the athletic programs at NCCC were also presented.

“Head coach Matt Clingersmith of the baseball team,” McKeown said. “During the past 13 seasons, Matt has made five NJCA World Series appearances and racked up 471 wins. His teams have twice finished as national’s runners-up. Matt has received Coach of the Year honors five times and has been asked and has produced three Major League Baseball draft picks. He was just recently inducted into the Western New York Baseball Hall of Fame.”

“It’s an awesome experience, having two baseball guys here, Rick Dehlinger and Bob McKeown ; being inducted,” Clingersmith said after the ceremony in regard to seeing his peers excel and being honored, as well as what the game has meant to him. “They’ve had great baseball careers and hearing their stories, playing here, and seeing our first Junior College World Series … NCCC has grown into a national powerhouse.”

A big name of the attendees was Jeremiah Wilkes, who was honored at the unveiling.

“Also in attendance today is a former NCCC basketball stand-out Jeremiah Wilkes,” McKeown said. “Wilkes played with NCCC from 1995 to 1997. He was named both All-Region and All-Conference and scored 1,056 points during his career here. To honor Jeremiah, a commemorative ball has been placed in our trophy case alongside the other five 1,000-point scorers. Please join me in a round of applause for Jeremiah Wilkes.”

The members of the audience whose name appeared were then announced by McKeown.

“As a former inductee on the wall, I’m excited to share this wall with the following inductees:

“From the Class of 1978, Willie Moore is here from the National Wrestling Championship.”

“From the Class of 1987, head coach for men’s basketball, Dan Bazzani is here.”

“From the Class of 2001, national wrestling champion, Mark Jurek is here.”

“From the Class of 2006, baseball pitching legend, Rick Dehlinger is here. Rick thank you.”

“From the Class of 2014, Dave Yaksich is here, a contributor to the program.”

Each name on the wall was celebrated by the athletic department’s staff and fellow inductees, some of which stopped to take pictures with their families and enjoy the celebration.