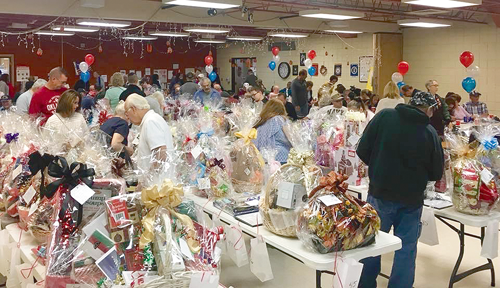 Pictured is a past Hands Healing Heroes event.

The event will feature live music, free food for veterans and their families, as well as entrance gifts, haircuts, massage, makeovers and a sheet of basket auction tickets for veterans. Civilians are encouraged to donate $5.

The story of Hands Healing Heroes began in 2014 when Kristin Jacobsen, a chiropractor and avid runner, was running a half-marathon with her pacer, another runner who commented on the time you’d like to run. The pacer said, “Don’t forget to thank your veterans serving you.”

At the time veteran care was in the media’s headlines reporting on a three to six month waiting period for veterans to receive care at the Buffalo VA Medical Center.

“I thought, ‘Are you kidding me?’ ” Jacobsen said. “Here we are on a hot day; running for absolutely no reason at all. It’s just a bunch of crazy, neurotic runners out there with no shade, and they’re still serving us and yet they’re getting shafted.”

“If I’m not actually doing anything, I’m no better than anybody else,” she said. “What I had decided was I was going to do free chiropractic care for any veteran who’d been wounded or injured in combat. I wish I could take care of all of them for free, but at least donate my time for those I can.”

The bug to give quickly caught on. Press reported Jacobsen’s story; patients wanted to become involved. Very soon after, six or seven people approached her about doing something for all the vets. Thus, Veterans Appreciation Day was born.

“Within two months we had pulled together our first Veterans Appreciation Picnic, which turned into Veterans Appreciation Day, and this year we’re expecting about 400 people. We do it every September,” she said. “Last year we outgrew the Duke Center because of fire code, and the city was hugely receptive. They took us into the Niagara Falls High School.

“I’m actually hoping to get a good response from the youth and really make a connection between the youth of America and those who’ve served our country, and try to close that gap and get them to understand the sacrifices and selflessness that these men and women have shown and displayed by giving their time, and some of them, their health; their passion for our country.”

One of the attractions of Veterans Appreciation Day are forms for medal searches that veterans and their families can utilize to find unclaimed medals that they or their loved ones earned in service. Jacobsen noted that while many were going to college, or pursing a profession and living our dreams, soldiers were putting their lives “on hold” and serving ours. They certainly deserve, she said, any honor they received or can receive.

“We’ve had one family member find medals for a brother who was lost in Afghanistan and she (his sister) was able to find five medals that her family had never received. It’s a phenomenal way to connect people to their past or with their loved ones and even if it’s a couple generations distant, there’s still medals out there waiting to be discovered.”

In essence, Jacobsen just wants to give something back to those who’ve protected her life and those around her.

“It’s something that deserves to be recognized and no matter where you fall on the political line of things, it’s not the politicians that we need to give a pat on the back,” she said. “It’s actually the blood, sweat and tears of those who’ve served and bore the brunt of the political actions.”