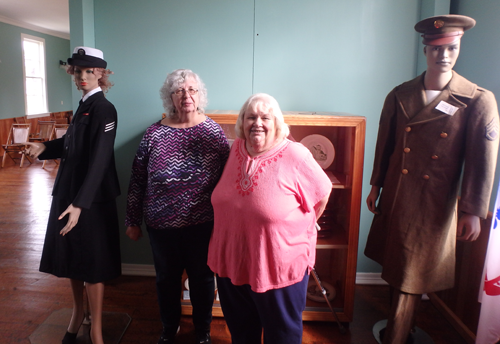 Bonnie Haskell, left, and Pat Thompson stand with mannequins made up like wartime.

On 58 acres, the Sanborn Farm Museum is something special to behold. With a barn, a church, a reception hall and plenty of generous donors, the space is filled up quite quickly with things from the past honoring its rural heritage.

But from 11 a.m. to 5 p.m. Saturday and Sunday, Sept. 21 and 22, the farm will be hosting an equally important part of history and character: the Vietnam Veterans of America and photos of that time and place.

Chairperson for the event is Bonnie Haskell who gave a brief description of the event.

“There’s no admission, free admission. The inside here at the hall there’s going to be a photo display. Outside, weather permitting, there’s going to be a car show and a military vehicle display,” she said. “Hank Nevins will be doing the car show, he’ll be here on Sunday. On Saturday, the Parkside Brass Quartet will be there at 1:30 (p.m.) doing military music. Star Spangled Banner, stuff like that. We will be serving lunch if anybody is interested. Food will be available. The veteran service agency in Lockport will be here if there are any veterans that need information.”

“They help vets,” Thompson explained. “If they have disabilities and they need to get medical attention. Maybe it’s paperwork for the VA. They do a lot for the county with veterans.”

Vietnam, in particular, has its own particular troubles. Thompson and Haskell noted that four generations of veterans’ families now have to deal with the effects of Agent Orange that was sprayed on soldiers during the war. On top of that, Vietnam vets weren’t honored when they came back after performing they’re duty.

“They were called ‘baby killers’ and all that,” Haskell said. “And it’s my opinion that the government didn’t want to open that fire-cracker, they didn’t want to pay for the vets. Because it wasn’t a declared war. We all know somebody that has Agent Orange. They sprayed it.”

“That’s a group that has been much in pain right now, what they saw in Vietnam is now starting to hurt their heads, it feels like they’re losing their minds,” said Glenn Wienke whose family owned the farm before it became the museum, and is, as well, the Town of Lewiston citizen of the year. “It was a dirty war. We want them to get together and share and see what’s out there.”

War has always been a part of life, said the trio. Haskell shared that her father would have recurring dreams that plagued his life. Her mother would have to leave the room and as a kid, Haskell stood in the hall and waited for the dreams to end. This went on for 14 years. He was World War II veteran.

Hopefully, the act of sharing and talking about these photos and getting what services are needed will help veterans of all background.

“My husband was in Vietnam, four times he was over there,” Thompson said. “They retired him. He was a supply sergeant. … They do help, but a lot of guys don’t know about it, and that’s why they should go to the veterans’ services and find out”

The Farm Museum will also be open for the event. 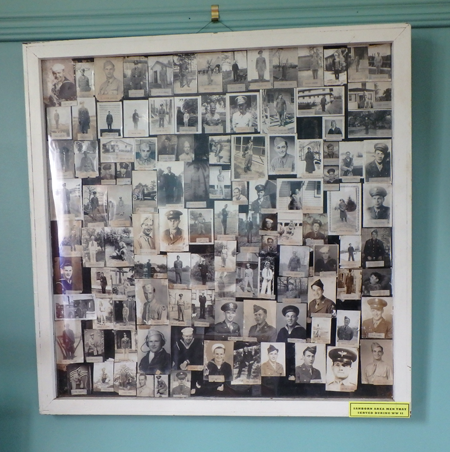 Pictures of war veterans from the local area are arranged and on display at the Sanborn Farm Museum.