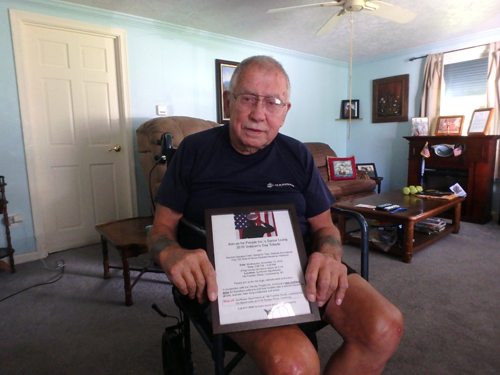 Gerald Tidd in his home holding one of the plaques on his walls commemorating his work for homeless veterans.

The term “goodness” is a term that can make plenty of us uncomfortable. In short, we don’t all do right, at least not all the time. No matter how hard we try, it’s difficult to say, honestly, that we live up to that ideal.

This would probably not be the case in terms of Gerald Tidd.

The 78-year-old Vietnam veteran, although he is now confined to a wheelchair, doesn’t ask anything for himself. Instead, he spends his time collecting and dropping off food, clothes, and gifts to veterans and their families.

“Why do I do it? It’s got to be done,” Tidd said. “Them people need help! They’re sleeping under the bridge, some of them. They’re sleeping on boxes. They need clothes, they need food. Perhaps, if we help them today, they’ll get back on their feet.”

Tidd has been up to this for 18 years. He said it began with taking a load of clothing, jackets, down to the homeless veteran center.

Tidd and a few of his friends leapt into action. They collected 15 coats and brought them to the center. According to Tidd, this is when he discovered what has since become his passion.

“They (the people at the homeless veterans center) said, ‘we can always use more,’ ” Tidd recalled. So, more is what they got.

That initial drive brought in hundreds of coats to the point where Tidd said the center couldn’t take anymore. “We got hundreds of coats,” he said, 18 years later. “Right now, I’ve got 80 in the bedroom waiting to bring them to the homeless veterans center.

“We get coats, we get toiletries. We get cans and boxed food. This is all delivered down the homeless veterans center and St. Vincent DePaul.”

One thing Tidd won’t take is cash or checks. He does, however, speak highly of gift cards, specifically Tops or Walmart. He also doesn’t take fresh meat, but on Thanksgiving, Christmas and Easter he’ll bring veterans hams or turkeys.

“There’s always a need,” Tidd said. “People will say, ‘Ger, what are your dates?’ The saddest part is that the first of the year donations drop 90%. People will spend a lot of money on Christmas and by the first, you can almost shut the doors because they don’t bring in anything. I try a lot, talked to different people … the need goes on and the hungry, and the disabled veterans and others are still there, looking for food.”

Another thing that probably everyone needs is just someone to sit with, listen to, and be there for. That’s why Tidd and some of his friends will visit vets while they’re in the hospital or hospice.

“We like to go up to the hospital, especially when they’re in the hospice ward, and try to cheer some of them up,” Tidd said. “It’s very sad around there at Christmas. A lot of veterans don’t get visitors, or they get them on the first of the month when they’re getting their check. They come in to sign the check.

“But if people can’t afford to buy a gift, just go up to the hospital, see the nurse, of course, and go on and talk to the vets. If they don’t want to talk to you, leave them. They’re having problems; leave them alone. We do take pizzas up there to the hospice ward, alcoholic ward, and psych ward. Just cheering them up. We take donuts up there sometimes.”

Of course, Tidd is also a veteran. He lost his legs in boot camp, but he’s never been “on the streets” as he said.

“Post Traumatic Stress Disorder,” said Tidd, explaining how veterans end up there. “Drugs, a lot of them come back from Pakistan or Vietnam, their wife or husband has left town, and they’re all distraught, and start hitting the bottle or taking drugs or just ‘go out of it.’ Imagine you come back, you’ve been in combat! It’s hard.”

At this point individuals can come to Tidd’s house to drop off donations. He’ll bring them to the homeless veteran center, as well as, One-Stop, an agency that helps get veterans jobs, St. Vincent DePaul, St. Paul, Holy Spirit and the VA. Tidd said that many businesses contribute with gift cards that he’ll pass out.

“We want to start this year, if I can get some more support, go down to actually where they sleep under the bridge and take food down there, buy 100 hamburgers and pass it around. Give them blankets and stuff. We haven’t done that yet,” Tidd said, and then explained that he’s vigilant about who gets donations.

“If they’re driving around in a Cadillac, they’re not getting my turkey!” he said passionately, but, showing his giving nature concluded that he really is the kind of person who would help anyone.

Help Tidd for Veterans Day by dropping off donations to 460 North Ave., North Tonawanda. Many people, he said, just drop it off on his front lawn.