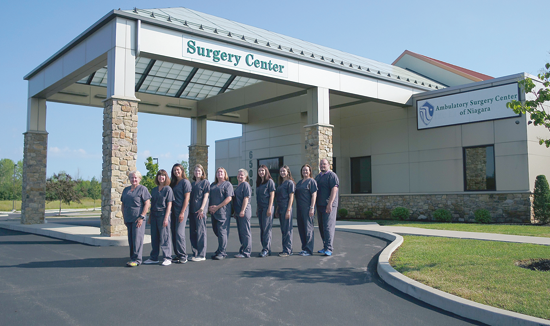 The staff at Fichte, Endl & Elmer Eyecare is pictured above.

Niagara: Celebrate National Sight Week by clearing up your vision

The hardships of growing older affect many living within the Tribune’s circulation. Some may need canes, walkers, wheelchairs; the nights may get longer, memories grow harder to access. Aches and pains from years of work may come to back to haunt the body, and of course, eyesight may become hindered.

However, Fichte, Endl & Elmer Eyecare wants to get the word out: National Sight Week is coming between Oct. 24-28, and the teams in the towns of Niagara and Amherst are looking for patients who’d like to take care of their cataracts quickly, without a hospital stay or weeks of adjustment and for, literally, no money.

“It’s through a foundation called ASCRS, that’s an acronym for American Society of Cataract and Refractive Surgery,” said Kathleen Otto, director of Marketing for Fichte, Endl & Elmer Eyecare. “Basically, our doctors volunteer their time to be surgeons. So, they are going to do free surgery, they are not going to charge anybody, but you have to qualify based on a couple of things.”

And what are those things? Otto mapped out how to qualify.

“Of course, you have to need cataract surgery,” she said. “You also have to have a limited income and be able to prove your income.”

Otto said that interested parties should try to dig up their tax statements from last year, or, if they are living on a fixed-income such as Social Security, to bring in those statements.

“We could essentially take 25 people, but the problem is getting people to apply. Getting them to know about program, getting them to meet the income guidelines,” Otto said. “Then, another thing you don’t think of, is people who are destitute and maybe living in a shelter or living with no phone are hard to get a hold of. They don’t have access to their taxes, they haven’t done their taxes, they have no income records. So, there are a lot of hurdles to try to get people to qualify for a free surgery.

“Please, if you have a limited income, if you’ve been told you need cataract surgery and you’ve been putting it off; this would be the time to come see us.”

National Sight Week, also known as Operation Sight, criteria can be found on ASCRS’s webpage, www.ascrsfoundation.org. If you or anyone you know needs cataract surgery and are living at or 200% below the federal poverty level; have no insurance or insurance that does not cover cataract surgery, this program is definitely something to talk about.

Fichte, Endl & Elmer Eyecare is an established, reputable firm that was started in 1980. Originally established on Pine Avenue in Niagara Falls; they built their location on Lockport Road in 2015. Since Claus Fichte founded the eye group, the center has performed thousands of cataract surgeries. According to Otto, they are the leader in WNY for cataract surgery.

“When Dr. Fichte, our founding partner, brought modern cataract surgery to Niagara Falls about 1980, it used to be about an hour and half procedure where you had to stay in the hospital overnight and you took people who couldn’t see anything and gave them some vision back even if it took six weeks to come around” Dr. Michael Endl said. “That was pretty revolutionary at the time, because before that there was even bigger incisions and it was thought it was maybe too dangerous to do.

“Thankfully because of engineers making us look smarter, and the machines getting more technologically advanced and the incisions getting smaller and smaller and less of an insult to the eye, less risk of infection; it’s generally a 10-minute outpatient surgery. … We’re in and out and trading your own cloudy lens for a clear lens, and it’s unusual that the next day people don’t already notice that their colors are brighter and clearer.”

Endl estimates he’s done over 20,000 cataract surgeries thus far, and that his partner, Thomas Elmer, has done about the same.

“We were fortunate to have trained with some of the original, pioneers of some of these procedures, heads of the American Academy of Ophthalmology and he has a similar experience range as myself,” Endl said. “He’s also in the 20,000 operation club.”

Otto also said that Elmer has traveled to Africa 10 times, and performed free cataract surgeries on what are called “Mercy Ships.”

“Today the surgery is really painless and it’s an amazing procedure,” she said. “Back in the ‘80s you had to spend the night in a hospital for a few days and now today, people don’t even have to put on a hospital gown, you can wear your own clothes in the operating room, the surgery itself is only 10 minutes long and you have no patch on your eye. You have no problem seeing.

“When you walk out of there, lots of times people go to breakfast afterwards. They continue on with their day and they come in the next morning for a follow-up appointment and they usually do a week later, as well, but overall, it’s very quick and painless.

“If they start the process before then, they can get the surgery done by National Sight week.”