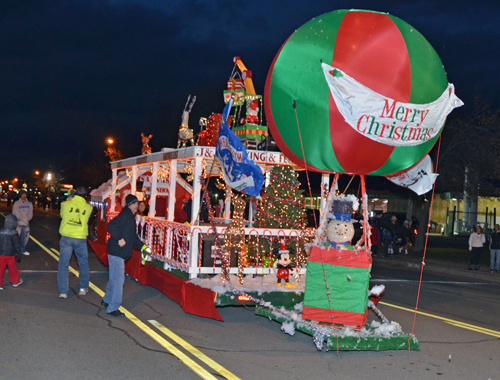 A scene from a previous Electric Lights Parade. (File photo)

Electric Lights Parade on hiatus for 2019

The talk of the residents in Town of Niagara on Friday was of a press release posted on the town’s Facebook page. According to the release, the Electric Lights Parade is taking a year off from marching on Military Road. It will continue in 2020.

This caused a long conversation on the Facebook page “Town of Niagara Brats, NY, USA” in which citizens mourned the loss of their winter frolic, as well as provided some insight into the reasons why.

Gary Strenkoski, owner of Strenkoski Brothers Construction Co., and a town justice for the Town of Wheatfield, was called to comment on the news. He offered “no comment” on the issue.

Online though, was a different story.

He wrote, “Sylvia Forgione Virtuoso just an FYI the parade never costed taxpayers or the TNBPA a penny... Money came from corporate sponsorship… The funds were handled by a C.P.A. and the town received a report each year on where the money was spent. Not a dime was ever wasted..,”

Strenkoski was responding to Virtuoso’s social media comment that the event was too costly for the Town of Niagara Business and Professionals Association (TNBPA) to run.

Strenkoski continued, “Sylvia Forgione Virtuoso I want to thank you for the many years that you spent helping with the parade…I will always remember you dedication and hard work to an event that was very important to so many children in the area. I look forward to seeing their plan as to what will replace the parade and the food drive for the thousands of children and adults each year… Over 3000 lbs. of food distributed to four food banks each year from that even….”

Virtuoso went on to say she didn’t know the finances and didn’t want to speak on an open forum. However, the Town of Niagara Police Department was part of the parade and it was costly for the municipality. She said she trusts the TNBPA, and that it was a great pleasure to work with Strenkoski.

The TNBPA was also contacted by the Tribune, but was directed to speak to Supervisor Lee Wallace.

“They just decided not to do it,” Wallace said in regard to the TNBPA running the event. “We (the town) are revamping it and doing it next year. … We just needed a year to plan it and do it properly, not that they didn’t do a good job. I like to plan things well, and I didn’t want to rush into it. … It would’ve been rushed to do it this year.”