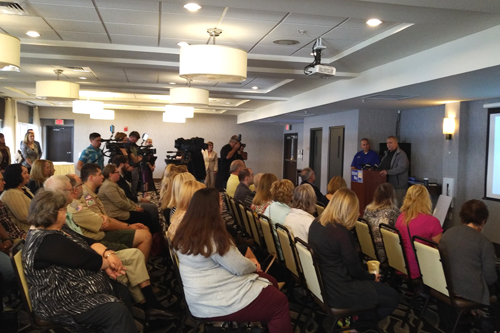 The United Way of Greater Niagara launched its fall campaign Friday at the Four Points Sheridan in Niagara Falls. UWGN Board Chairman Bob Kazeangin introduced Michael Sigurdson, a store manager of Wegmans in Niagara Falls, and Marcus Latham, a former teacher, as well as a former president of Niagara Falls Teachers Local 801, as co-chairs for campaign 2019.

As usual, the group seeks to raise $1 million before Nov. 29. As an additional twist is, for the first time, the focus area for organization includes North Tonawanda and the City of Tonawanda, because of a merger between the UWGN and the United Way of the Tonawandas.

“We merged in January,” said Bill Jakobi, AFL/CIO Labor liaison and campaign coordinator for the UWGN. “We have a little more bricks and mortar. We funded some of the same agencies; we expanded our territory. It’s more money coming into the programs.”

“The merger with the Tonawandas earlier this year has set the stage for even more support from the entire Niagara Region,” Kazeangin said in a press release. “We’re excited to launch our widest-ranging campaign to date and continue playing a vital role in the lives of so many in need.”

The UWGN supports a variety of programs, including the American Red Cross, Neighborhood Legal Services, Mental Health Association, the YWCA of the Niagara Frontier, Girl Scouts, the Salvation Army of Lockport, Niagara Falls and Tonawanda, and Heart, Love & Soul – which just got involved with United Way this year.

“Heart, Love & Soul is a food pantry and dining room in Niagara Falls,” said Mark Baetzhold, director of development. “We started collecting food for people in the community and it became a not-for-profit.”

“We have an incredible relationship with the Niagara Falls Boys & Girls Club,” Sigurdson said after being asked about his favorite agency that this campaign will support. “The effort that Rebecca (Vincheski) and her team put forth is really amazing, as well as, the impact they have on those kids. … They just went through a $1 million remodel. The facility is now so state-of-the-art, updated, and it’s really serving a vital area of the community with young kids as they hopefully grow up and become leaders in our communities, too. So, they all are my favorite, but that one will certainly have a special place in my heart.”

Latham, a former seventh grade social studies teacher, brought up how his involvement with the United Way began a long time before he started teaching – before he became a liaison between the United Way and Local 801, and longer since he retired as president for teachers in Niagara Falls.

“On a personal note, my sister had cerebral palsy and years ago it was a United Way agency that provided the physical therapy that allowed her to lead a productive life,” Latham explained. “It’s an organization that is near and dear to my heart.”

Before concluding, Jakobi and Jim Briggs of the Niagara-Orleans Labor Council awarded a check to the campaign.

“I’d like to thank all our member agencies and the program providers that do an outstanding job. You’re all part of helping build a strong community and we appreciate all the work that you do,” Jakobi said. “On behalf of Niagara-Orleans Labor Council, all the union affiliates, sponsors and friends of organized labor, we’re proud to announce the 11th annual Labor at the Races raised $16,800 this year. As the event began, 11 years ago, our grand total is we raised $136,000. This goes above and beyond what our union members donate on a regular basis out of their paycheck; it goes a long way to help the United Way.”

“It’s a far-reaching impact; it’s not just individuals,” Latham concluded. “It’s their families and it’s the entire community that the United Way supports. It’s like a pyramid; it’s not just the individual, it’s the families that benefit, also; the families that we support and that trickles down. It really does trickle down. Honest, it works, because it does benefit the entire community.”

More information about the United Way, the programs it supports and how to become involved, visit www.uwgn.org or call 716-731-4580.