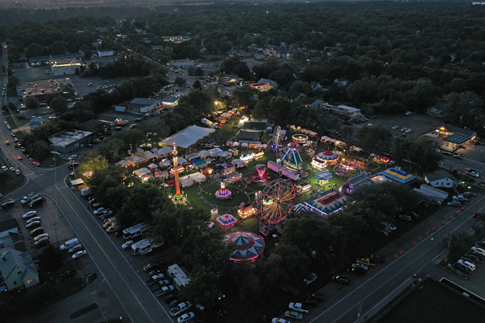 A sky-high view of the first night of the 2019 Niagara County Peach Festival at Academy Park. (Photo by K&D Action Photo and Aerial Imaging)

Is this the last Peach Festival at Academy Park?

Tens of thousands of people will visit the Niagara County Peach Festival this weekend. It’s a safe bet more than a few will wonder if this is the event’s final ride at Academy Park.

The question is: Can the Village of Lewiston and the Lewiston Kiwanis Club work out an agreement for 2020 and beyond?

Trustees on Aug. 19 tabled the Kiwanis Club’s request to hold the event at the Center Street site next year. Board members seek to improve the park grounds – incorporating renovations Mayor Anne Welch said would be for naught if midway trailers drive over top of them. She wants the now-four-day event to move two blocks south, to the plateau neighboring Artpark.

Kiwanians have said Academy Park is the home of the Peach Festival – it has been for 60 of the past 62 years, and that formula has worked (to the tune of $1.3 million raised for charitable giving).

In recent weeks, multiple high-ranking Kiwanis Club members have told The Sentinel that, if the Peach Festival is forced to leave Academy Park, they intend to move the event to the Town of Niagara – to Veterans Memorial Community Park, home of the popular “Music Mania Mondays” summer concert series.

On Thursday, Kiwanis President Marty Pauly said, “Any remarks about moving elsewhere are not set in stone. They’re just remarks.”

He explained, “It’s natural to think that, if, for whatever reason we might not be in Academy Park in the future, Kiwanians have to start thinking of other places – and a lot of other places have entered our minds. Some of them are not here in Lewiston, unfortunately. But that’s all they are, are thoughts. They’re ideas for a conversation.

What To Do with Academy Park

A debate began last winter over what Academy Park should be moving forward.

Welch and the Board of Trustees are intent on getting more use out of the site. To this end, they’re seeking state funds to refurbish the grounds, add a framing walkway, and incorporate works of art around the periphery. Welch has discussed these ideas with Niagara Greenway Executive Director Gregory Stevens.

In November, Welch said, “Our Parks and Recreation Board has been working on a plan for Academy Park, to redevelop it, take down the old bleachers, move the bandshell out of the way, and redevelop the park. We want to see the park (available) for everybody.”

Parks, Recreation and Conservation Board member and Recreation Director Brendan McDermott explained to Kiwanis Club members, “We want this to be the gateway into the village. Beautify it. Bring people in so that there’s more daily activities.”

At the same time, former Department of Public Works Superintendent Terry Brolinski said Academy Park was “unsatisfactory” and “unsafe for anybody to use” following the 2018 Peach Festival.

Welch has said the heavy machinery and large trailers used to bring Peach Festival midway rides in and out of the park are a detriment to the grounds.

She has proposed moving the event to the plateau, now called Richard F. Soluri Park, where it was twice held at the turn of the century.

She said, “Our thoughts are we can redevelop the park and still take care of Kiwanis by letting you use the Lewiston plateau. I know you’ve had it up there before. You have more than enough room to put on the Peach Festival. There’s acres of land.

“We want to keep the Peach Festival; we just need to move it two blocks away.”

Kiwanians acknowledged Academy Park was not properly tended to after last year’s Peach Festival. They pledged to do a better job this time around.

“The size of Academy Park is just right. It has the festival type of feel. … You bump into old friends; you have quick conversations; you continue on your path; you bump into more old friends; and it’s like that all weekend long. We don’t want to ever have to change that.” 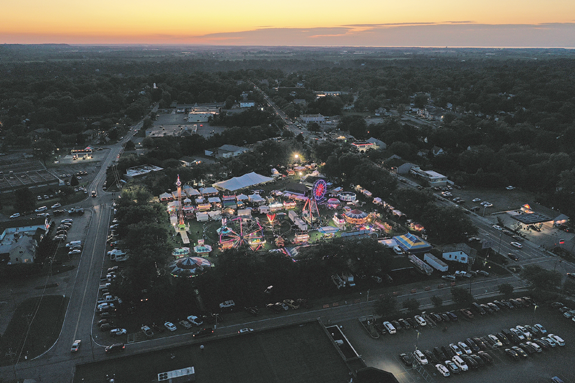 Academy Park Vs. Other Locations

The Peach Festival location has been discussed at a handful of Village Board meetings over that past 10 months. Kiwanians have noted their displeasure with the plateau.

In November, Pauly said, “There’s a ton of things that need to be studied up there.”

Kiwanian Jack Hanrahan said, “If (the plateau) was so great, why we didn’t stay there?”

Trustee Vic Eydt said, “If they do move up there, I want to get commitments as far as grants and whatnot to increase whatever we need up there – whether that’s power or water. I know there’s stuff up there now, but whether it’s the quality or quantity of what they need, that’s the question.”

Last month, Parade Chairman Jerry Wolfgang said, “That property is not setup for the rides. … It is not fit for us.”

Pauly said, “I believe the general feel is the conditions have not presented themselves to a point where we’re comfortable at the moment with the Peach Festival up there – in light of what needs to be put on the ground as a festival.”

Welch said the plateau has received $800,000 in upgrades since 2000, and, “It would probably house your event a lot better now than it did in those two years.”

Still, “I’m also looking into funding for the Lewiston plateau. I would like to put a pavilion up there, some more waterlines and electric, to house Kiwanis,” she said.

On Tuesday, Pauly and the Board of Trustees went back and forth for the better part of 45 minutes, trying to hash out where handicap parking spaces would be located this weekend. Traditionally, more than two-dozen spots have been reserved on the Center Street side of the park. But Welch said it would be safer to have that parking on another road.

The two sides finally agreed to reserve spaces on the corner of South Ninth and Cayuga streets.

This prompted Welch to joke, “See, we can work things out, Marty.”

He replied, “We can work a lot of things out, Anne.”

Following the meeting, Welch said, “I just want to make this very, very, very clear: I don’t have anything against Kiwanis. I love Kiwanis. I think they’ve done an awesome job all the years that they’ve been here. I have volunteered many times for Kiwanis over the years. They do a lot for charity; they do a lot for the community. I have nothing against Kiwanis. I simply am concerned about them being in Academy Park and the overuse of that park. And I just felt that it would be better for them, and for the village, if they moved to the larger park.

“That being said, you know, I’m glad they’re here. I don’t want them to leave. And, hopefully, we can work things out so it’s just a better, safer whole scenario.”

Pauly said Thursday, “I would assume a decision (on the use of Academy Park in 2020) would be made by their October board meeting. I believe the board is aware that they need to make a decision soon, just for the sake of the Peach Festival (planning).

“I’m going to reiterate: There is no decision to move anywhere for 2020 yet. No decision is going to be made until after the board makes their decision.”

People came out in droves to enjoy the first night of the 2019 Peach Festival. Two culinary competitions were staged in the bandshell, and the Peach Queen candidates readied for a Sunday crowning. Live music and cheerleading activities were slated for Friday. A 5K run and the area’s largest parade are set for Saturday morning.

When the community comes out this weekend, “We in Kiwanis hope that they never forget what it means to be in Academy Park,” Pauly said. “The location, in respect to the village; all the businesses around that do profit from the Peach Festival. We want them to never forget all the fun that they have at this Peach Fest. I know there are attendees coming this year who have come for years and years and years. There are memories on that field that can’t be changed. We hope more memories are made this weekend.” 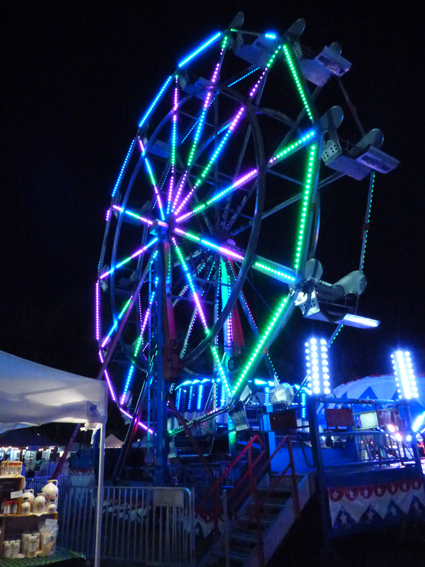 Scenes from Thursday’s opening night of the 2019 Peach Festival. 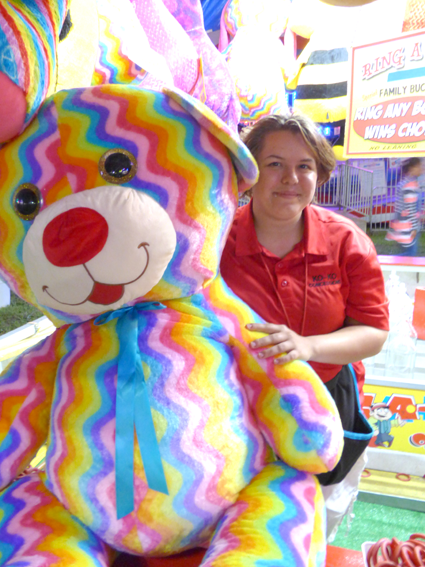 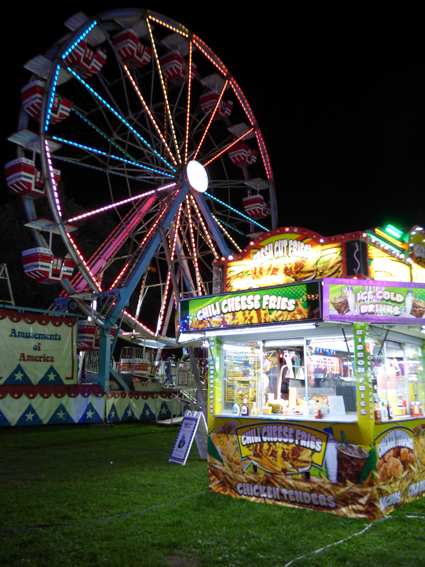