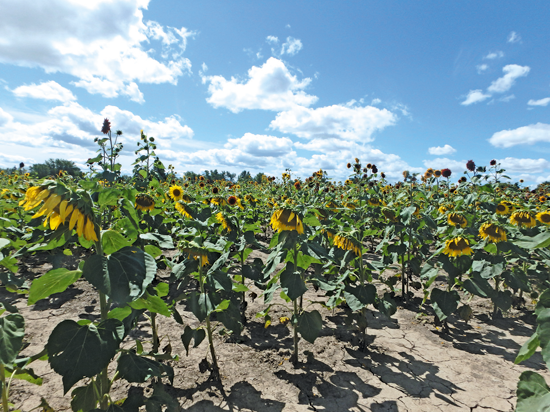 Sunflowers, corn mazes, food trucks, and picnicking under apple trees. Sunflowers of Sanborn had all these things on Saturday during its Labor Day weekend event.

Now in the third year since the farm became a destination – after Louise Brachmann planted sunflowers in honor of her deceased parents – there were about a thousand people at the second annual food truck event.

“The very first year we didn’t plan on it to being an event, we just planted it (the sunflowers) in memory of my parents,” Brachmann said. “We didn’t have parking, because it really wasn’t for the public at the time. So, last year we decided to move everything over to our old orchard and we put a full-parking lot in for everybody. This year we added a second exit-only driveway to go out on Baer Road so that everybody doesn’t have to turn left on the 31.”

Deanna Przediora, event coordinator, talked to the people coming from the ring of food trucks, then moved over to the U-Cut field of sunflowers to put the stalks of each flower (or flowers) into plastic bag – only charging a dollar for each.

While the summer season is finished with Labor Day, Przediora said the farm would be open on weekends (11 a.m. to 7 p.m.) till the end of September. Future events between then and now are KIDS DIY Paint Day at the Sunflower Field at 11 a.m. Sept. 8, which also couples as Fall Paint Day starting at 2 p.m.

“We’re going to have cars coming where they decorate the back of their car,” Przediora said. “Kids can come and go trick-or-treat to each car. We’re good on the weather because it’ll be in September.” 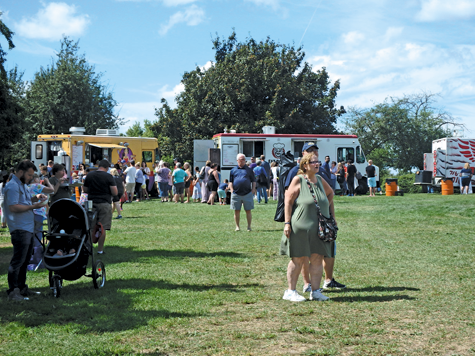 At the food truck event there was lots to choose from.

Przediora said she tried Dirty Bird and was blown away, but still wanted to go back to see the Cheesecake Guy. Seize the Day Seafood had the longest line, and behind the food trucks under the shade of apple trees, several picnickers could be seen chowing down on their selection.

“We’re very excited; we’re glad to be here,” said Will, an employee at Maria’s Bene Cibo. “It’s a beautiful day, weather is perfect and we’re very glad to be a part of the festival.”

“We have Italian and American sandwiches,” Maria said. “We also have a homemade cannoli, two flavors, cheery almond, and chocolate raspberry right now. We’ll start our pumpkin next week.”

The transition from humble farmland to agritourist hot spot is still very wrapped up in the sunflowers and what they represent, not only to their planters, but also to everyone who visits. With the bustle of people trying their hand at a corn maze or standing in line for some good food, it’s still a place someone could enjoy just walking amongst the sunflowers.

“Three years ago we planted them in memory of my parents, and we had so many people stop and pay tribute to the sunflowers in memory of a loved one who had either passed away or who was currently sick,” Brachmann said. “We just decided … not only would this be a great thing for the community, it would be great for people to come out and enjoy themselves. It’s a very family friendly venue. ... We do have a lot of nursing homes that come out and bring the elderly and the sick. It’s a place they can come to and sit under the shade of trees and it’s very peaceful.” 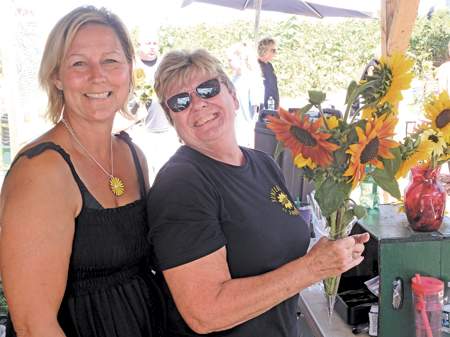