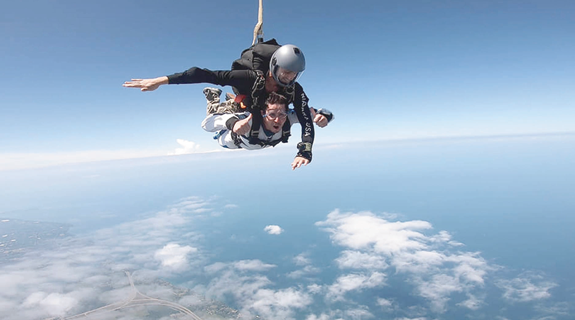 Matt, shown on his jump over northern Niagara at close to 12,000 feet, with tandem instructor Jason Berger; and on his descent (below). (Top photo: Skydive the Falls; bottom photo: Terry Duffy)

Skydive the Falls: New, unique offering for those of the daring persuasion

Visitors and residents of the River Region are certainly fortunate when it comes to the number and variety of experiences available in the area. From the arts to fantastic fishing, jet boats to wine trails, the living history of Old Fort Niagara to the high-caliber entertainment at Artpark, the countless festivals and so much more, nary a day goes by without something new, exciting and enjoyable for visitors as well as locals to partake in.

Out by the lake in the Town of Porter there’s new and unique offering for those of the daring persuasion to jump into. Known as Skydive the Falls, this new operation is under the direction of veteran tandem instructors Jason Berger and Tom Neilson along with pilot Kyle Wolinski, who mans the Cessna 206 triple prop. They team, including videographer Troy Fallon in the air and Jill Berger on ground, offer visitors the thrills of a one-of-a-kind open-door plane ride over Niagara Falls – followed by a skydive high up from the upper heavens.

Thrill-seekers will love this one.

“We are the first people in mankind to ever offer a flight over the top of Niagara Falls and then skydive after,” Berger said. “It’s kinda cool; there’s a lot of places that fly the falls, but we’re the first to actually achieve going over the falls (and then skydive).”

Skydive the Falls, open for just a few months, is located at 1698 Braley Road. It operates out of the former Shear Airport and functions as a seasonal facility, open April 1 through Oct. 31. Its staff of three have a combined 50 years of skydiving with more than 5,000 jumps.

“We were members of a club that opened on weekends,” Berger said. “From there, we had the opportunity to make a business a full-time thing; and when the airfield came up for sale, we talked with Shears (the former owners.) We told them we wanted to use the airport, and their eyes just lit up. So everything just kind of fell in the right direction.”

So what does Skydive the Falls have to offer? Glad you asked!

For the daring who love doing things high up – think high as in skywalking/rappelling off the CN Tower by the Rogers Center in Toronto – Skydive the Falls does it quite a few times better.

The package that awaits you begins with a detailed, United States Parachute Association-certified training by Skydive the Falls instructors, known as the Advanced Freefall Program. Developed in 1984 in Chicago, AFP has improved upon it over the years to become one of the most comprehensive student programs available.

Following the instructional program presented by Neilson, Skydive riders Matthew and Ashley were outfitted for their jump with protective body suits and goggles, as well as tailored parachute gear that would be later be tethered to tandem instructors Berger and Neilson.

The Tuesday afternoon experience began with a unique plane ride over 6,700 feet up in the open-door Cessna, capturing the American and Horseshoe falls, the Niagara Region and all its glory.

Pilot Wolinski said Skydive the Falls works with other tourist providers such as Rainbow Air and abides by restrictions from U.S. and Canadian agencies, as well as Buffalo Niagara International, Niagara Falls and Toronto airports, throughout the flight.

“There’s certain altitude restrictions (over the falls),” he said. “You stay above 3,500 feet.”

Wolinski said he uses a counter traffic advisory frequency based out Buffalo Niagara International Airport: “I’ll talk to them out of Buffalo, they’ll tell me how many people are in the traffic pattern. They tell me to go the frequency, and we’ll all talk to each other. So, they’ll get a position and altitude of what I’m doing. So, if I’m going to the Grand Island bridge (doing) 4,000 feet making right-hand circles over the golf course, we talk to each other.”

“Most people (air tourist providers) fight to get as low as possible (when flying over the falls). Us, we’re the opposite, so we have no traffic, because we’re always climbing and coming back higher over here. We typically hit the falls at 4,500 to 5,000 feet on average. So, we typically have little traffic,” Berger said.

As to any unexpected encounters, he added, “It’s only been a couple of times; usually there’s not more than two aircraft between 3,500-3,700 feet.” 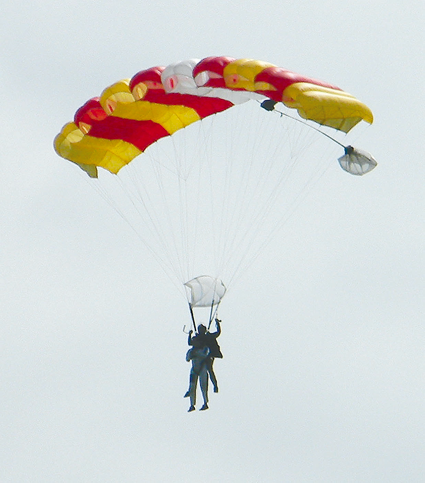 Berger said such factors as weather conditions and wind velocity do come into play, and can often dictate whether a jump can be allowed on a certain day. He said wind gusts on the ground are completely different than those found at higher altitudes, adding that a gust of 10-15 mph at ground level can translate to gusts in the 35-mph range higher up that will postpone a jump.

“Look, our main focus here is on being safe in every respect,” Berger said, noting Skydive the Falls continually checks on such preflight conditions as part of a planned jump.

Other conditions involve wind direction. For example, with southerly winds blowing in from Lake Erie, “We would be jumping closer to the Niagara Airport,” Berger said. “If the winds were blowing out of the north, we would jump out over the lake. We have jumped out there before. Height-wise, we’re petty much jump the same altitude, no matter what direction it is, between 10,500 and 12,000 (feet).”

Berger said the limit is six jumpers at any one time, explaining, “It’s all based upon the weight and the aircraft.”

On this afternoon, with winds beginning to blow in from the north, both jumpers were launched at heights close to 12,000 feet on the northern fringes of the Niagara County shore along Lake Ontario.

“It’s cool sometimes; sometimes we get out over the lake, and actually it’s one of the coolest things in the world. You see all of the blue,” Berger said.

The jumps, which took place on two separate flights, saw parachutists Matt and Ashley tethered with Berger and Neilson respectively as they departed the plane. With air temperatures hovering at 39 degrees, both would free-fall with their instructors at speeds in excess of 120 mph for the first 5,000 feet before their parachutes were engaged. From there, both went on a staged descent at speeds of 30-35 mph to a designated landing spot at the Shear Airfield in Porter, where they safely touched ground.

Accompanying them was Fallon, who recorded a separate video offering of each individual jump provided by Skydive the Falls.

“What’s really cool about that, it that it’s up close and personal of your skydive,” Berger said. “It’s easy because you don’t have to have another person on the airplane, and the instructor takes the video. The instructor holds the camera and you have every aspect of your skydive.”

So what of their experience?

“It was amazing,” free-faller Matt said. “The views of the falls that you never see. I mean, you take it for granted driving by, but being on top of it like that seeing the overhead view is amazing. And right before the jump, the anticipation, wow.”

“You’re just looking right down, taking in the whole view, the winds. I wasn’t panicking at all, (but) it was definitely overwhelming,” Matt said. “He (Berger) just walked through you step by step on everything: ‘Keep your head up, feet touching the back of the plan (when jumping).’ It was awesome. I highly recommend it!”

Passenger Ashley added, “Everybody’s got to do it once; you have to – it’s amazing. I don’t know how to explain it; you don’t know what to say. It’s absolutely amazing!”

Berger added, “For those who jump, no explanations necessary; for those who haven’t jumped, you can’t believe it.”

The cost of a complete package, which covers training and use of equipment, a 30-minute plane ride, including over the falls plus the tandem jump with instructors, is $250 per person. The aforementioned video package ranges from $115 to $175 per, depending on options.

Berger and the staff closed by inviting the River Region community to their Skydiving the Falls Fest, Friday-Sunday, Sept. 13-15, at the Shear Airfield, 1698 Braley Road, Porter. Featured will be jumps via the Cessna 206, as well as biplane and helicopter jumps; a Saturday evening pig roast catered by The Brickyard Pub and B.B.Q.; food trucks; live art demos; entertainment; tent camping availability; T-shirts and prizes.

For further information on the parachute and skydive training packages, log on to www.skydivethefalls.com, visit on Facebook, or call 716-783-1100. 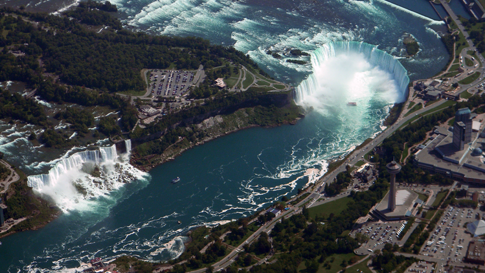 A panoramic view of Niagara Falls taken aboard the Skydive the Falls Cessna 206, from 6,700 feet. 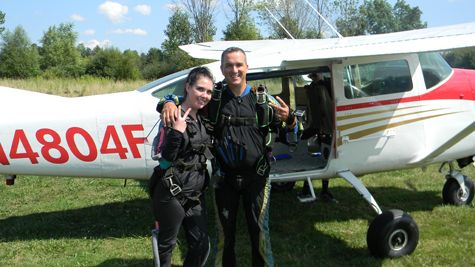