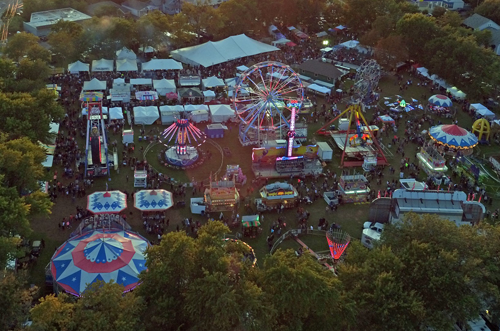 Peach Festival 2020 location up in the air

Village of Lewiston trustees table vote, want to see how 2019 event goes before deciding on next year

The upcoming Niagara County Peach Festival could be the last one held in Academy Park.

Trustees in the Village of Lewiston on Monday voted to table a motion granting the Kiwanis Club of Lewiston permission to use Academy Park for the 2020 event.

“We need to get through this Peach Festival first,” Mayor Anne Welch said.

Trustee Nick Conde made the motion to postpone a definitive vote until after the Village Board has a chance to meet with midway provider Amusements of America. Trustee Claudia Marasco seconded the motion, which was unanimously approved.

Welch said the issue at hand is the state of Academy Park when the Peach Festival ends. She said field conditions following the 2018 event were deplorable. Department of Public Works Superintendent Terry Brolinski echoed that sentiment at a previous meeting.

The mayor has suggested the plateau is better suited for this four-day event. The Peach Festival was held there in 1999 and 2000.

Following an initial meeting last winter, Welch and her board members asked the Kiwanis Club to broach the idea with Amusements of America.

Trustee Claudia Marasco expressed frustration her board has yet to receive adequate information on logistics related to a new Peach Festival location.

“When we talked last … we clearly asked questions as to ‘Are you going to talk with your ride company? How long is the contract? Would they be making a site visit? Would we be able to do this, so that it would be something that you would be able to do – and they would be willing to do?’ ” she said. “We don’t really have that information. And that’s what’s kind of missing with the whole situation.”

“Let’s get some really concrete facts in place,” Marasco added. “We didn’t hear anything back (after our initial meeting).”

Eydt said the vote could’ve been different if the Kiwanis Club provided plans for the 2020 festival earlier this year.

Now, “It seems like you’re trying to jam this down our throats,” he said.

“We didn’t get the information that we requested, so we’re still waiting,” Welch said.

Trustee Dan Gibson said, “I don’t see any reason why the Kiwanis Club and the village can’t work together to cohabitate in the park.”

Peach Festival Chairwoman Jillian Colucci said her club is working diligently to find solutions and get additional details for the Village Board.

Club President Marty Pauly said the club asked Amusements of America to look at alternate sites, but “They have been unable to do that. We have met at a few locations; we have sent our ride company some detailed maps. … I can tell you our ride company prefers to stay at Academy Park.”

Kiwanian Jerry Wolfgang said the club would arrange a meeting between Amusements of America and the Village Board during Peach Festival week.

“Let’s bring them in; let’s discuss also ... landscapers coming in right after, so the DPWs don’t have to do it,” Conde said. “Let’s see how this year works out, and at that time we’ll discuss 2020.” 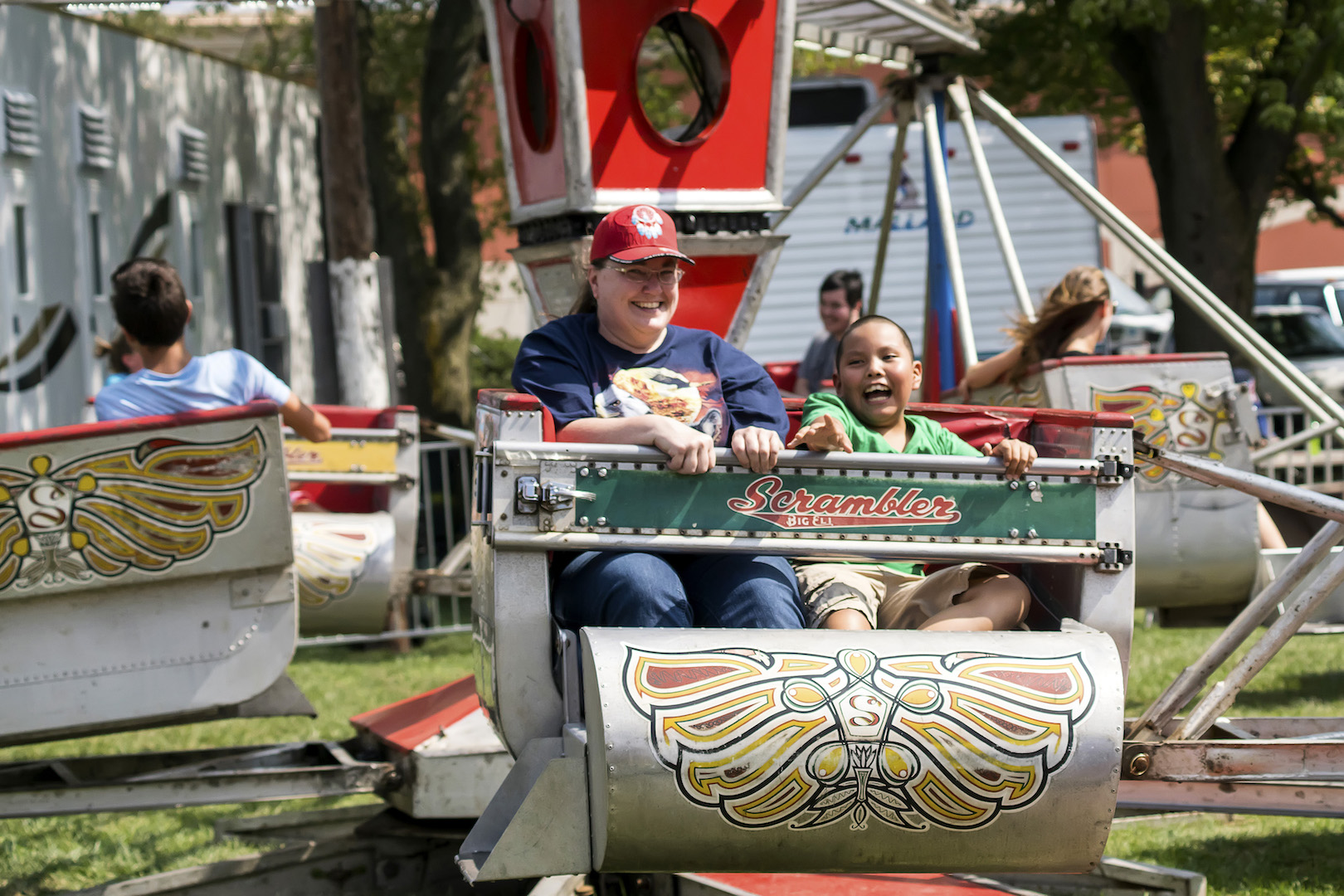 To Move, or Not To Move

Wolfgang stressed the plateau, “was not a satisfactory move. The people who come to our festival complained.”

He added, “That property is not setup for the rides. … It is not fit for us.”

Pauly said the club’s contract with Amusements of America is set to expire. Kiwanians will look to renew their partnership with the ride provider.

Wolfgang warned, “If we get the ride company upset, and they walk, there will be no Peach Festival.”

He explained Amusements of America is unlike other ride companies, which seek a festival of seven days or longer.

Welch said the plateau has received $800,000 in upgrades since 2000, and, “It would probably house your event a lot better now than it did in those two years.”

After the meeting, Pauly told NFP, “I believe the general feel is the conditions have not presented themselves to a point where we’re comfortable at the moment with the Peach Festival up there – in light of what needs to be put on the ground as a festival.”

What’s more, he said the club expects revenues to drop if the event leaves Academy Park, as some people will be put off by having to ascend the sloped greenspace – by foot or by car.

“And I mentioned this in there – and I know this isn’t really a major talking point – but it’s the perception of it, as well. Yeah, it might just be two blocks away to some people, but to me, and I believe for a lot of other people, it is up the hill. It’s going to change the dynamic of Peach Festival,” he said. “There was a comment in here earlier how the businesses right around Academy Park do very well that weekend. It’s very easy to just walk across the street right now: You can go get ice cream at Hibbard’s; you can go get something from Cask + Cow; you can go to Syros, if you want to; you can go to Tops and get something if you want to. That’s gone, now, if we move it up the hill. I know I’m not going to think about walking down a hill just to get something else.

“And something that I don’t think is thought of a lot is the economic impact that the Peach Festival has had. It has a major economic impact on the village – at a time of the year where we’re entering the cold months. Things do start to slow down here, like they do anywhere when it gets cold. Festivals that are in place in the village, especially late summer/early fall, the local businesses thrive on those festivals. It helps to sustain them through the cold months.”

Pauly cited remarks from resident Dena Armstrong. She also said, “I just think it’s a better experience in the village itself than on top of that plateau.”

Kathleen Harold, who lives across from the Red Brick Municipal Building, said her children would be “horrified” to discover the Peach Festival was moving. She said the event – its Saturday morning parade, in particular – benefit local retailers.

“The Peach Festival is so important up there (at Academy Park),” she said.

“Kiwanis has done so much. … They give back so much to the community – let’s not shun them,” Harold added.

Pauly said, “We would like to keep the festival at Academy Park,” where it’s been for 59 of its 61 years.

Eydt said he appreciates the Kiwanis Club’s concerns, but noted the Village Board is eager to begin working on Academy Park in 2020.

Last fall, Welch revealed conceptual plans to renovate and reconfigure Academy Park. An initial drawing called for the grounds to be split into four sections, with the bleachers removed and the stage relocated. She said a splash pad or ice rink might also be featured in the park.

Her concern is midway operators damaging these upgrades.

At that time, the mayor explained, “It’s the peoples’ park, and they can’t even use it. We want something that people can go there and use it (year-round), and picnic there, and go to the (Veterans of Foreign Wars) monument.”

On Monday, she reiterated, “We want to redevelop the park. How do we put these large trucks and rides in the middle of the park that we’re trying to develop?”

“Our next focus is going to be going up Center Street and into that park,” Eydt said. “There’s a lot of different things we want to do up there.” 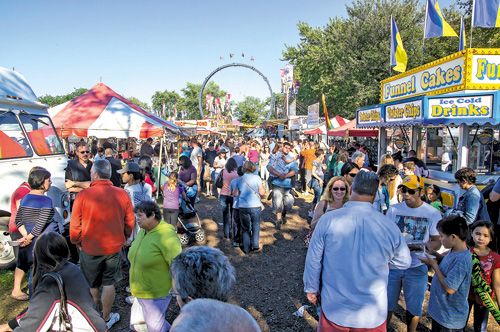 The Kiwanis Club will hold the 62nd annual Peach Festival at Academy Park from Thursday through Sunday, Sept. 5-8. The organization was previously given permission to use the Center Street, Portage Road and Cayuga Street grounds from Saturday, Aug. 31, through Saturday, Sept. 14, for setup and teardown.

One change eventgoers will notice next month is increased safety measures along the park.

Eydt previously expressed trepidation over the proximity of ride apparatus to side roads and passersby. Pauly said ride operators would move their trailers offsite this time around.

That move will require amenities – like bathroom facilities and electricity – which Pauly said will cost the Kiwanis Club about $6,000.

Peach Festival revenues support myriad local organizations throughout the year. To date, more than $1.3 million has been raised to aid nonprofits.

“No money exists for Kiwanis; it exists for the community,” Wolfgang said.

In a related vote, the Town of Lewiston was given permission to place the Lewiston Family Ice Rink at Academy Park for another holiday season. Open hours for the attraction will begin Oct. 1.

Deal, chairman of the Lewiston Parks and Recreation Committee, said taking away events or forcing them to move would hurt the community. He said Academy Park is the ideal location for the Peach Festival and ice rink – at least until funding is in place for a park makeover.

“Taking away such great events or forcing them to go to other locations that make it impossible for them to succeed is going to harm our community,” Deal said.

He added, “As with the Peach Festival, there is no better place for the ice rink than to be at Academy Park. The utilities have been upgraded and the logistics are perfect for both events in their current location.”