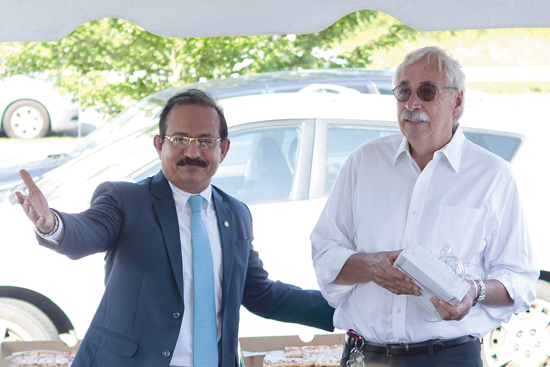 Dr. Willard Ruth came to Grand Island early in his medical career to be close to family, not imagining he would work in one town for nearly five decades.

“I think back when you’re young, it’s one day at a time. You really don’t think about that. It’s just something that I’ve loved. I’ve enjoyed it, and it was hard to retire,” Ruth said of his career.

“People would come in and they would say, ‘I’ve got three years, four months, three days and 12 seconds until I retire.’ And they just hated to go to work.”

“I love what I do. I was so lucky. I don’t ever remember a day not wanting to go to work.”

“Let me tell you, in my career I have never come across a more caring, compassionate and dedicated doctor,” said Sanjay Chadha, senior vice president for service line operations at Niagara Falls Memorial Medical Center, to a gathering of colleagues Wednesday outside the GI Family Practice offices at 2608 Grand Island Blvd.

“I have yet to find an any more dedicated doctor like him who cares for a person inside out, not only the medical needs, but he will talk to you about your overall mind-body health, social issues, what’s going on? I’ve known the doctor the last 10 years almost now, and I can never forget him. The guy is so humble.”

“The 49 years that I’ve been here have gone by in a flash,” Ruth told the party, where one patient after another stopped to talk to him. Ruth described the people on the Island that he has treated as “loyal.”

“People enjoy seeing you at the grocery store, being one of them,” Ruth said. “And, you know, I think that really helps. When I started out, we did house calls and we were always part of the community.”

Over 51 years as a doctor, Ruth said he’s seen some changes, not all of them good. Ruth bemoaned the prevalence of digital medicine, which was promised to be the next big thing. “Computers were the worst thing, as far as I’m concerned. They just slow you down,” he said. “So every doctor you talked to says how bad computers are.”

Medicine is not computer science, he explained, but rather a practice, an art, that has become more complex.

“When we came to the Island, it was all cash, $6 a visit. No insurance. ... It was all Blue Cross Blue Shield. ... People would come in, pay the $6, be given a receipt, they would send that receipt to Blue Cross, and they got reimbursed 80%. So it was all cash, and there were no referrals. So it was very uncomplicated; we did our records on 5 by 7 cards.”

Hal Pierce was one of the many patients of Dr. Ruth who attended the retirement get-together to wish him well. In 1977, Pierce, a patient of Dr. Ruth since 1973, was preparing to take 10 of his Boy Scouts from Troop 254 to summer camp. They all needed their physicals.

“So I went over and asked Dr. Ruth to come to our meeting. He came to the meeting and he charged all the boys $2 for a physical,” Pierce recalled. “Then he had the $20 and he handed it back to me and he said, ‘Buy some snacks for your boys when they’re at camp.’”

“I say change is difficult. Change is always hard. But we have to deal with it, and there’s good people taking my place,” Ruth said. 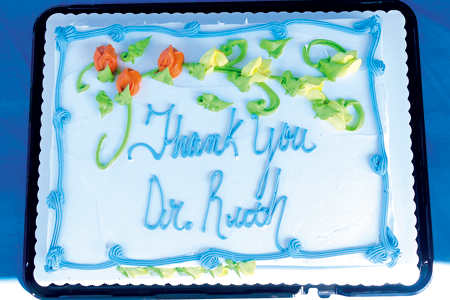